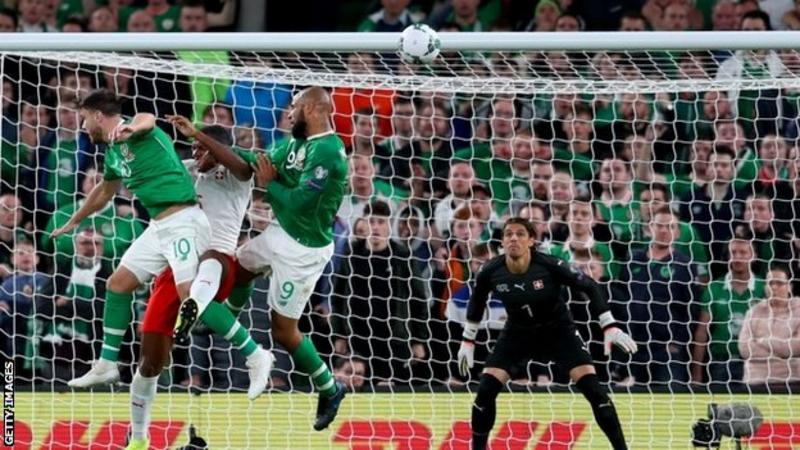 David McGoldrick’s late header secured a crucial draw against Switzerland in Dublin to keep the Republic of Ireland unbeaten in Euro 2020 qualifying.

The Swiss dominated and deservedly led when Fabian Schar scored to cap off a good passing move.

But – as they did in Denmark – Mick McCarthy’s side fought back.

Glenn Whelan hit the bar from long range and moments later McGoldrick headed home from James McClean’s deflected cross to save a point.

Group D is a three-way battle between the Republic, Denmark and Switzerland for two qualifying spots. All three games between those sides so far have ended in draws.

The Irish are three points clear of Denmark, who beat Gibraltar 6-0, with Switzerland another three points back – but both those sides have games in hand.

The Irish do it again

Just like before the Republic’s game in Denmark, McCarthy – who remains unbeaten in his second spell in charge – said he would take a draw.

Just like that game, the Irish fell behind with about 15 minutes to go. And, just like in Copenhagen, they found an 85th-minute equaliser.

In truth, they were fortunate against a side ranked 11th in the world, who reached this summer’s Nations League finals.

Switzerland dominated possession and had plenty of chances to score with Denis Zakaria having a shot saved, Schar missing with several efforts from outside the box and Breel Embolo slipping as he was about to shoot from a glorious chance.

Enda Stevens, Seamus Coleman and Alan Judge all needed to pull off last-ditch blocks or headers – and the Irish had to switch formation in the first half to 3-5-2 to try to get a foothold in the game.

With Switzerland’s 14th shot of the match, Schar broke the deadline as he swept home from Embolo’s lay-off.

But, like Copenhagen away, the boys in green showed great character and rallied. Hearts midfielder Whelan, who has two goals in 86 caps, hit the crossbar with a powerful shot from 25 yards.

Swiss manager Vladimir Petkovic said before the game that the Republic’s style was “very unpleasant”. And what happened next will have been extremely unpalatable to him.

The crossbar had barely stopped moving from Whelan’s piledriver when McGoldrick leapt in the air to power home McClean’s cross – only the Republic’s second effort on target.

The Irish are bidding to reach a third European Championship in a row, having only ever qualified for one before 2012. Three Euro 2020 group games are in Dublin, which adds an extra incentive to qualify.

This is the first time they have remained unbeaten in their opening five European Championship qualifiers since the build-up to the 1996 tournament.

McCarthy’s side are now three games away from playing in a major tournament finals in their homeland. The next Irish qualifier is away to Georgia, who are not in contention to qualify, on Saturday, 12 October (14:00 BST).

If the Irish win – and there is a winner in Denmark’s home game against Switzerland that day – then McCarthy knows two draws in their final two games, in Geneva three days later and at home to Denmark on Monday, 18 November, will be enough.

The top two teams from each qualifying group go to Euro 2020, with the play-off places decided from last year’s Nations League groups.

Shane Duffy (Republic of Ireland) is shown the yellow card.

Offside, Republic of Ireland. Alan Judge tries a through ball, but Shane Duffy is caught offside.

Alan Judge (Republic of Ireland) wins a free kick in the attacking half.

Alan Judge (Republic of Ireland) is shown the yellow card for a bad foul.

Jeff Hendrick (Republic of Ireland) wins a free kick on the right wing.

Fabian Schär (Switzerland) wins a free kick in the defensive half.

Albian Ajeti (Switzerland) wins a free kick in the attacking half.

Glenn Whelan (Republic of Ireland) hits the bar with a right footed shot from outside the box. Assisted by Alan Judge.

Offside, Republic of Ireland. Conor Hourihane tries a through ball, but James McClean is caught offside.

Manuel Akanji (Switzerland) wins a free kick in the defensive half.

Jeff Hendrick (Republic of Ireland) wins a free kick in the defensive half.

Offside, Republic of Ireland. Conor Hourihane tries a through ball, but Jeff Hendrick is caught offside.

Kevin Mbabu (Switzerland) is shown the yellow card for a bad foul.

James McClean (Republic of Ireland) wins a free kick in the defensive half.

James McClean (Republic of Ireland) wins a free kick in the defensive half.

Goal! Republic of Ireland 0, Switzerland 1. Fabian Schär (Switzerland) right footed shot from the centre of the box to the bottom right corner. Assisted by Breel Embolo.

Offside, Republic of Ireland. Enda Stevens tries a through ball, but Alan Judge is caught offside.

Attempt missed. Kevin Mbabu (Switzerland) left footed shot from the centre of the box is high and wide to the left. Assisted by Haris Seferovic with a cross.