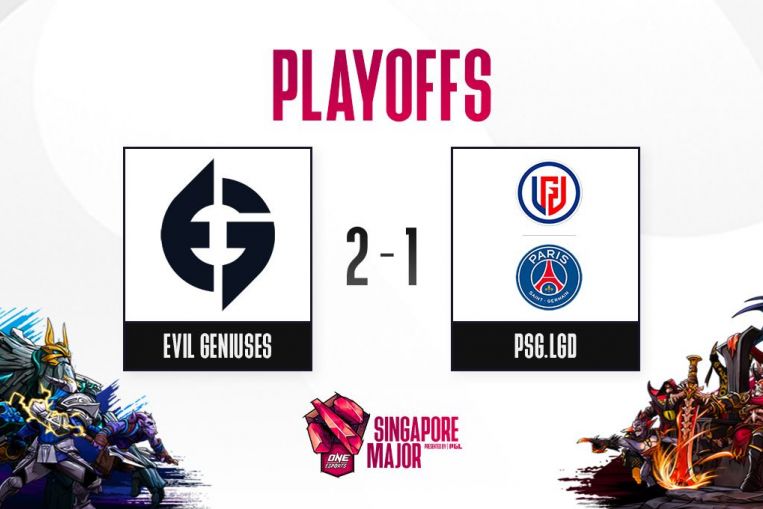 Evil Geniuses, who boast Singapore’s top-earning player Daryl “iceiceice” Koh, won the first game easily and appeared to be cruising to a straightforward win after a strong start in the second game.

But PSG.LGD showed the fighting spirit that had seen them claim a surprise 2-1 win over the tournament favourites Team Secret in Friday’s second round of upper-bracket play-offs and seize the second game that lasted almost 35 minutes and draw level against Evil Geniuses.

In the deciding tiebreaker third game, Evil Geniuses regained their composure and dominated play, sealing their spot in the grand final of the US$500,000 (S$672,785) tournament held behind closed doors at Fairmont Singapore.

Evil Geniuses coach Kanishka Sosale said: “Based on how the game was going at some point, I think we had a pretty good lead, something just happened (in the second match) so we talked about it and we managed to fix it for the next game.”

While his team are focused on claiming the title, Sosale was thankful to be involved in an offline tournament during the coronavirus pandemic.

He said: “It’s really easy to take everything for granted, especially as a pro-player life. I’m just so happy to see beautiful Dota again, especially in a LAN tournament with all the teams because that’s all my life is, I just love Dota.”

There is still another chance for PSG.LGD to reach the grand final as they face Invictus Gaming on Sunday in the lower-bracket final, with the winner earning the right to take on Evil Geniuses.

Invictus Gaming had earlier beaten Team Secret 2-0 in round four of the lower-bracket round to qualify for the final.