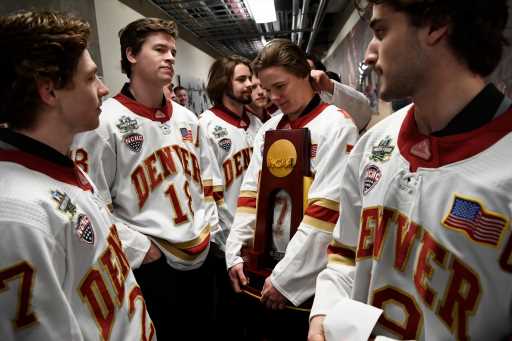 It will be a banner weekend for the Denver Pioneers. Literally.

Prior to Saturday night’s game against Providence at Magness Arena, the DU hockey team will raise its 2022 NCAA national championship banner.

Game time is scheduled for approximately 6:05 p.m. and fans are encouraged to show up early to watch the on-ice ceremony. The moment will be a nod to last season’s triumph, something that still leaves sophomore forward Massimo Rizzo pinching himself.

Junior defenseman Mike Benning called winning a national title, “One of the most special moments of my hockey career — so far.”

The Pioneers could use a boost to overcome a relatively slow start to their season. They lost both games at then-No. 13 Massachusetts last weekend, falling 4-2 on Friday and 3-0 on Saturday. DU outshot UMass by a wide margin — 77-39 over the two games — but couldn’t capitalize.

Carle believes there is plenty of talent to grow on this year’s squad and said he’s especially eager to see how Benning performs. Benning was the MVP of the Frozen Four as a sophomore defenseman.

“Mike’s defensive game is the thing that stands out to me,” Carle said during his coach’s show. “He’s made himself a more complete player.”

The Pioneers opened the season as the No. 1 team in the nation following its record-tying ninth national championship.

The Pioneers won their ninth national championship with a 5-1 victory over Minnesota State on April 9 in Boston. DU rebounded from a 1-0 deficit after the second period with five unanswered goals.

DU’s nine national championships are tied with the University of Michigan for the most in Division-I men’s hockey.