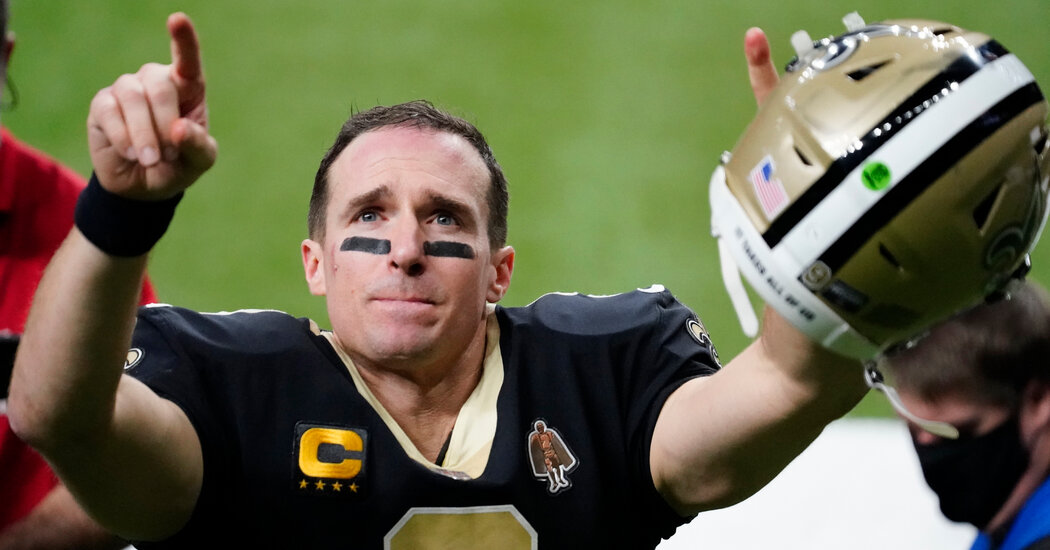 Drew Brees, who overcame a career-threatening shoulder injury to become the most statistically prolific quarterback in N.F.L. history, likely played the final game of his 20-year career Sunday, when his Saints lost, 30-20, to the Tampa Bay Buccaneers in a divisional round playoff game in New Orleans.

For his part, Brees declined to discuss his future, and said the outcome of Sunday’s game will have no bearing on whether or not he’ll choose to keep playing.

“I’ll answer this question one time, and that is I’m going to give myself an opportunity to think about the season, think about a lot of things, just like I did last year, and make the decision,” Brees said.

Brees, 42, has a year remaining on the two-year, $50 million contract extension he signed last March and has been approaching his status on a season-by-season basis. But in April he agreed to join NBC Sports as a football analyst, raising speculation that the 2020 season would be his last.

“You find out so much about yourself, and you fight through so much when you play this game,” Brees said. “I’d say this season, I probably had to fight through more than I’ve ever had to in any other season in my career, from injuries to all the Covid stuff to just crazy circumstances, and it was worth every moment of it, absolutely.”

Brees missed a month with 11 broken ribs and a punctured lung but returned for the Saints’ final three games of the regular season, winning two to help them capture the No. 2 seed in the N.F.C. playoffs. Instead of rounding out his career with a second championship to further elevate his legacy, Brees delivered a jarring conclusion, throwing three interceptions Sunday — including on both of the Saints’ fourth-quarter possessions.

Over his 20 N.F.L. seasons, Brees set numerous passing records, including most career passing yards and completions, and won his only Super Bowl appearance, with New Orleans after the 2009 season. He ranks second in completion percentage, passing yards per game and touchdown passes, in that category trailing only Tom Brady, who threw two on Sunday to help eliminate the Saints.

A second-round pick in 2001 by the Chargers out of Purdue, Brees made a Pro Bowl in San Diego but was discarded in favor of Philip Rivers. In the final game of the 2005 season, Brees, an impending free agent, dislocated his right shoulder and tore his rotator cuff and labrum, an injury so severe that he wondered whether he would ever play again.

Only two teams pursued him that off-season — Miami and New Orleans, which had a 3-13 record in 2005 after being displaced by Hurricane Katrina. Undeterred by both the state of the city and the uncertain state of the organization, Brees chose to revive his career in New Orleans, where he joined forces with new coach Sean Payton.

Together, they brought respectability to the franchise and hope to a devastated region. In his first season, Brees led the Saints, who had made the playoffs five times in 39 seasons before he came, to the N.F.C. championship game. In his fourth season, he led the Saints to a Super Bowl, beating three Hall of Fame quarterbacks — Kurt Warner, Brett Favre and Peyton Manning — in the playoffs to do so.