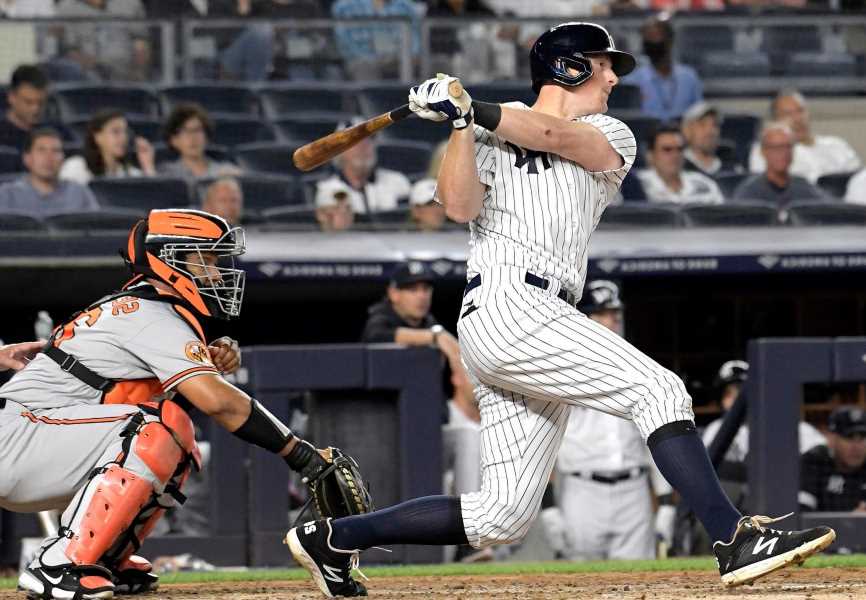 Yankees turn back to versatile lefty to fill depleted rotation

DJ LeMahieu thought he had ball four. He appeared to be right.

But then home plate umpire Tom Hallion called strike two and gave LeMahieu another chance to come through in the clutch with his bat instead.

LeMahieu delivered, drilling a single up the middle to break a tie game in the seventh inning and send the Yankees to a 10-3 win over the Orioles on Wednesday night in The Bronx.

Jameson Taillon continued a strong run on the mound with a season-high 10 strikeouts in 6 ¹/₃ innings, leaving the game with a 3-3 tie before LeMahieu opened the floodgates to lift the Yankees (58-49) to their third straight series win. They won for the seventh time in their past nine games, keeping pace with the Athletics on Wednesday to stay two games back of the final playoff spot in the American League.

After a rough July, in which he had just three multi-hit games, four extra-base hits and six RBIs, LeMahieu is quickly making up for it in August. He went 3-for-5 with a double and four RBIs Wednesday, giving him back-to-back multi-hit nights, three extra-base hits and five RBIs over the last two games alone.

Soon after LeMahieu put the Yankees ahead 4-3 with his RBI single in the seventh, Giancarlo Stanton broke the game open with a bases-loaded bloop down the right-field line. Stanton’s double, which came off the bat at 74.5 mph for the king of exit velocity, cleared the bases and gave the Yankees a 7-3 lead.

Gleyber Torres notched his second RBI of the night with a double to cap off the seventh-inning rally before LeMahieu came through with a two-run double in the eighth.

Taillon built on a strong July and continued to thrive, pitching into the seventh inning and giving up only three runs (two earned). He had retired 10 straight batters before issuing his only walk of the night in the seventh inning, ending his night.

But Jonathan Loaisiga came on to keep the 3-3 game intact, getting out of the inning with a double play before the Yankees took the lead in the bottom half.

Making just his second career start at Yankee Stadium — the other coming as a Met in 2015 — Matt Harvey held the Yankees hitless through three innings.

But Anthony Rizzo, who drew a 13-pitch walk in his first at-bat after fouling off four balls that were hit deep enough to be home runs, finally straightened one out for the Yankees’ first hit in the fourth inning. The first baseman crushed a solo shot to right-center field, his first homer at Yankee Stadium as a Yankee. It made him the first player in franchise history — since the RBI became an official stat in 1920 — to record an RBI in each of his first six games with the team.

The Yankees then cut the deficit to 3-2 when Aaron Judge singled on a bloop to right field and later scored on a single by Torres. They tied it in the fourth off Cesar Valdez as Kyle Higashioka doubled and came around to score on LeMahieu’s single.