Dillian Whyte hits so hard it has taken its toll on his renowned coach Mark Tibbs.

Whyte returns to the ring on Saturday when he fights Oscar Rivas, an unheralded heavyweight who has respectable wins over Andy Ruiz Jr. and Kubrat Pulev as an amateur, and Bryant Jennings as a professional.

To get Whyte ready for the 02 Arena show in London, Tibbs has been working with his fighter to ensure they do not underestimate Rivas. They want to avoid an upset akin to Ruiz Jr.’s seventh round victory over Anthony Joshua earlier in the year.

Whyte’s been working on his cardio, going through fight strategies with Tibbs, and working on his punch routines on the pads. And it is that padwork in particular that has left Tibbs needing treatment.

Tibbs has three athletes at the Matchroom Boxing event. There’s Whyte, the light heavyweight puncher Charlie Duffield, and the cruiserweight Richard Riakporhe. And all three of them have been going hard at him in training.

Read more:Lawrence Okolie canceled his vacation with Anthony Joshua just so he could fight this weekend

“For this show I’ve got Richard Riakporhe, massive puncher with both hands, Charlie Duffield, big puncher, and Dillian, a heavyweight, another big puncher, so it takes its toll. I won’t tell you exactly how I’m feeling … in a couple days I can have a bit of a rest, but nah, we got good physios on board who treat me, give me advice.”

Tibbs is relishing the competition against Rivas. Victory for Whyte sees his athlete win the interim WBC heavyweight title, pushing him further toward a mandatory shot at the WBC’s outright ruler Deontay Wilder.

Wilder, alongside Tyson Fury, Ruiz Jr., and Joshua, are seen as a big four in heavyweight boxing, but Whyte, considering his run of form and his recent resume, is punching with the best of them according to Tibbs.

“Dillian Whyte … he’s up there. He’s up there in the top three. It’s form, resume, I know where he’s from, I know the percentages. I know what’s come out, what’s to come. I know what the others are all about. I know what I’m lookin’ at, you know what I mean? He’s a real man. He’s the real deal.” 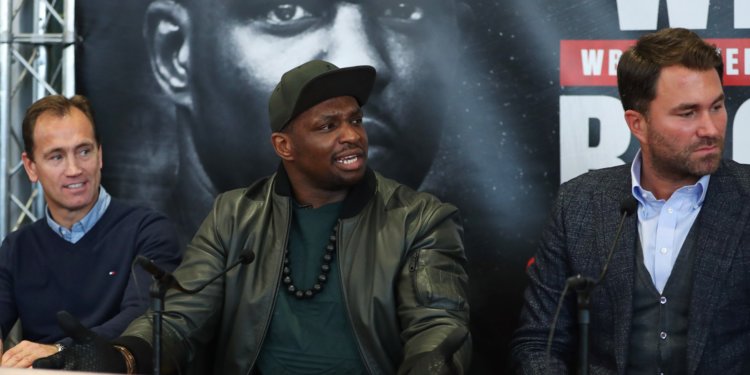 “You’ve got Ruiz Jr., Joshua, Fury, Wilder, and Whyte. I think Oleksandr Usyk is going to be in that mix but he hasn’t had a heavyweight fight yet.”

As for Whyte? “He continually keeps winning. Saturday will be very difficult but he will come through. Rivas was a very good amateur and that’s difficult for a guy like Dillian who had only seven amateur fights, quite inexperienced, amateur and pro, whereas these guys been boxing all their life.

Tibbs also talked-up the Colombian. “Oscar Rivas don’t get the big chances like he’s got now and this is his moment. It’s a dangerous fight. He’s a good all-rounder. He looks the part, he can box, he can fight. He’s fast, mobile, he’s got pedigree. I’m a trainer, I’m a believer in pedigree, but I’ve got Dillian and pedigree means nothing to him.

“Let me tell you something … I’ve never met a guy like Dillian Whyte, he’s a one off. When you talk about pedigree, amateur experience, fought this one and that one, pedigree means nothing to him. He’s just hungry … he’s a hungry fighter. He’s skilled-up, he’s a pay-per-view fighter, and up there in the top three in the world.”

But Whyte and Tibbs don’t want to settle at top three. They want the number one status that belongs to a champion. They want the shot at WBC champion Deontay Wilder, a fight Whyte could quite feasibly get long before his Matchroom stablemate Joshua.

Hearn told Business Insider that should Whyte beat Rivas, they’ll look to book one more fight then go for the winner in the eventual Wilder and Fury rematch, even if it meant jumping ahead of Joshua’s plans to win his world titles back, then unify the division in a massive money fight against Wilder.

“With Joshua losing to Ruiz Jr. there’s a very good chance that Whyte gets that fight before Joshua, but right now the only thing on Joshua’s mind is to beat Andy Ruiz in the rematch and for Dillian Whyte, beat Oscar Rivas.”

Whyte and Rivas are the main event fight in Matchroom’s heavyweight show in London, Saturday.