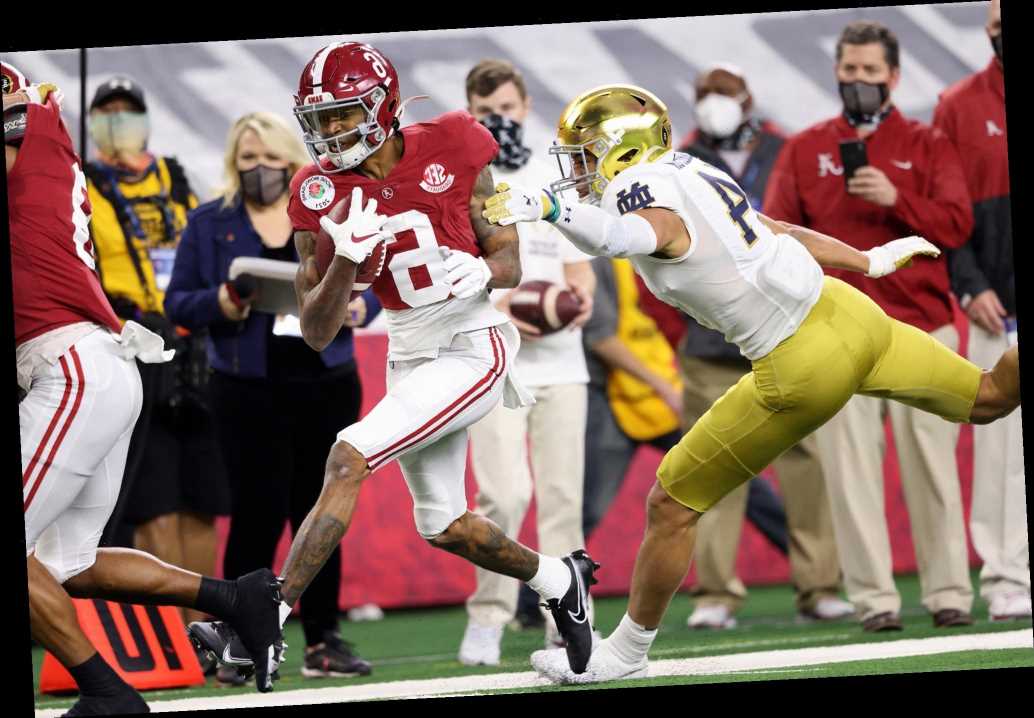 Alabama vs. Notre Dame: Irish won’t be able to keep up

The beauty and tradition of the Rose Bowl was relocated to the sprawling concrete of North Texas. The backdrop of the sun-soaked, San Gabriel Mountains was replaced by a mountain of metal and glass inside ultra-modern AT&T Stadium. The game’s classic logo sat beneath Jerry Jones’ massive jumbotron.

Nothing could have looked more out of place — except Notre Dame in the College Football Playoff.

On the field where the Fighting Irish failed to score a touchdown in their blowout playoff loss to Clemson two years ago, No. 4 Notre Dame suffered its latest humiliation on the sport’s grandest stage, as No. 1 Alabama cruised to a 31-14 win to advance to the national championship game for the fifth time in the past six years.

The Crimson Tide (12-0) will play the winner of No. 2 Clemson/No. 3 Ohio State on Jan. 11 in Miami, where Nick Saban can pass fellow Alabama legend Paul “Bear” Bryant with a record-setting seventh national championship.

Eight years after Brian Kelly was embarrassed in the national title game against Alabama, Notre Dame (10-2) still looked like a featherweight in the wrong class, incapable of standing toe-to-toe with the most dominant team in the nation. In seven BCS or New Year’s Six bowl games, Notre Dame has gone winless, with no game decided by fewer than two touchdowns. Kelly is now 1-7 against top-five opponents, appearing eons from capturing Notre Dame’s first national championship since 1988.

After missing the playoff for the first time last year, Alabama will again be the favorite to win it all, having never gone three straight seasons without a national title since Saban arrived in 2007.

Three years since his title-winning overtime touchdown, DeVonta Smith showed how much his legend has grown — and why he is likely to become the first wide receiver in 29 years to win the Heisman Trophy — finishing with seven catches for 130 yards and three touchdowns.