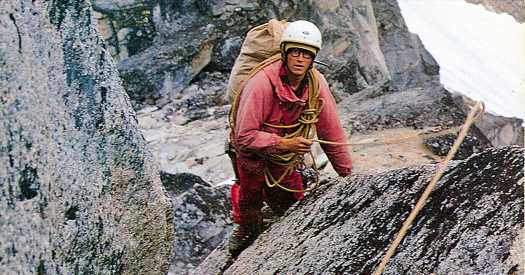 When David Roberts wrote his first book, a personal account of climbing and death in the mountains of Alaska, more than 50 years ago, he sparked a genre of outdoors writing that still pulses through the publishing world.

When he wrote his 32nd book, published this year, he reflected on what it was about discovery that so intrigued him — in this case his coming upon an ancient kiva, or ceremonial underground chamber, in the American Southwest.

“Yes, I’ll grant, when I find something strange and unique in the backcountry I feel the faint temptation of ownership; the babbling id brags, I found it, it’s mine,” he wrote in “The Bears Ears.” “But sentience and curiosity take over. It’s mine dissolves into the far more potent What’s it all about?”

Mr. Roberts tickled that timeless question — What’s it all about? — in a way that turned adventure into literature, spawning generations of protégés and imitators. Echoes of his work can be heard in other climbers turned writers, including Jon Krakauer, the best-selling author of books like “Into Thin Air,” another personal tale of deadly misadventures on a mountain — in this case, Everest.

Mr. Roberts died of emphysema on Friday at a Boston hospital after a six-year bout with throat cancer, his wife, Sharon, said. He was 78.

Mr. Roberts spent much of his career chronicling remote adventures, some personal and some historical, from the Himalayas to the Arctic. He co-wrote books with world-renowned climbers like Ed Viesturs, Conrad Anker and Alex Honnold.

He also had a fascination with ancient civilizations, particularly the Puebloan people of the American Southwest. He combined deep research with on-the-ground reporting in books like “In Search of the Old Ones: Exploring the Anasazi World of the Southwest” (1997).

He wrote with a rare blend of speed and finesse, pounding the keyboard with his right index finger and in later years sometimes dictating to his wife or others. His first book was written in nine days; his last, titled “Into the Great Emptiness: Peril and Survival on the Greenland Ice Cap,” completed this spring, is to be published by W.W. Norton next year.

“Some of these books will really stick around, because he was always trying to come up with some way of answering the puzzling question: Why do we do this?” said Greg Child, a climber and author who befriended Mr. Roberts in later years.

It was his first book that taught Mr. Roberts that he could combine adventure and writing into a career. In 1965, as an undergraduate at Harvard, he was on the way down from a 32-day push to the summit of Alaska’s Mount Huntington when an anchor in the rock failed. A climbing partner, Ed Bernd, fell thousands of feet to his death.

It was one of more than 20 expeditions to Alaska, and one of three times in just a few years that he witnessed deaths while climbing. He considered giving up on mountaineering. Instead, as a graduate student at the University of Denver, he locked himself away during spring break and wrote about the Mount Huntington expedition.

“Mountain of My Fear” was published in 1968. It became a pillar of a new literary genre.

The book, along with his 1970 follow-up, “Deborah: A Wilderness Narrative,” about another Alaskan misadventure, in 1964, turned Mr. Roberts into a new kind of author.

“He kind of showed a bit of a path for a generation of climbers, that you could turn your passion and your obsession with climbing into a living,” Mr. Child said.

None followed Mr. Roberts more closely than Mr. Krakauer, a former student of his at Hampshire College in Amherst, Mass. Mr. Roberts was a literature professor who was leading an outdoors program at the college when Mr. Krakauer arrived in 1972. He recalled Mr. Roberts as a “shaggy-haired, baby-faced” professor leading a group in scaling the walls of the school library. Mr. Roberts became his mentor and friend, and encouraged him to write.

“He didn’t just help my career — he created my career,” Mr. Krakauer said. “He cut the trail and sent me down it.”

David Stuart Roberts was born on May 29, 1943, in Denver. His father, Walter Orr Roberts, an early climatologist who studied the effects of global warming, was founder of the National Center for Atmospheric Research, in Boulder. David’s mother, Janet Smock Roberts, was a city councilwoman there for nearly two decades.

David graduated from Boulder High School, then studied math at Harvard, receiving a bachelor’s degree in 1965. Shortly before he had left for college, he was climbing near Boulder with a childhood friend when the friend fell to his death. While at Harvard, he was climbing New Hampshire’s Mount Washington when two nearby climbers were killed in falls.

“At 22 I had been the firsthand witness of three fatal accidents, costing four lives,” Mr. Roberts wrote in Outside magazine in 1980, adding, “The question ‘Is it worth the risk?’ was not one any person could answer by consulting only himself.”

The issue of risk weighed on him throughout his career.

Mr. Roberts tackled it directly in a 2006 memoir titled, “On the Ridge Between Life and Death: A Climbing Life Reexamined.” He acknowledged being “compulsive, driven, self-absorbed, competitive and emotionally distant, traits often shared by serious mountaineers,” Florence Williams wrote in The New York Times Book Review. “Now, in his 60s and mellower, he decides to reckon with the demons of his risky past.”

Mr. Roberts and a few other like-minded adventurers at the Harvard Mountaineering Club planned daunting pursuits in Alaska, like a new route up the sheer Wickersham Wall — climbed for the first time a year before — on the way to the summit of Denali, North America’s tallest mountain, in 1963.

“What Dave had was the vision and drive to do that kind of climb,” said Matt Hale, who was part of the expedition. “That translated — the same drive — to the books he wrote.”

After Harvard, Mr. Roberts returned to Colorado to attend graduate school at the University of Denver. On his way to receiving his doctorate in English, he met Sharon Morris, another student. They married in 1967.

She survives him, as does a brother, Jon.

Mr. Roberts worked at Hampshire College through most of the 1970s. He resigned in December 1978 when he “was confronted with allegations of sexual misconduct towards students,” a school spokeswoman said on Monday. The details of the allegations remain unclear.

By then he was an established and prolific author. He wrote for National Geographic and Outside magazines, among others.

It was during a 50-year reunion trip to Alaska in 2015 that he discovered a lump that turned out to be throat cancer. He wrote four books after the diagnosis.

“He had the ability to conduct complicated research and write really quickly,” Mr. Hale said. “And he was insatiable. One book was done, and he’d move right into the next.”

Many friends and literary associates noted how fluid his prose was. “It came out fully finished, like a final draft,” the climber Mr. Honnold said. “That’s kind of the way he thought about a lot of things, too — slightly slower and more thoughtful.”

As Mr. Roberts cut back on climbing, he became obsessed with the rugged area around Cedar Mesa in southern Utah, which he first explored during a magazine assignment in 1992. He returned every year, sometimes venturing deep into the maze of canyons for weeks at a time. He hiked and climbed into nooks that might not have been seen by humans in hundreds of years. He wondered how ancient tribes had built their stone homes into the cliffs, how they lived, where they went.

Friends and colleagues said he could be difficult, impatient and high-minded — “an unashamed snob,” Mr. Krakauer said. His interests were broad. He sprinkled references to literature into casual conversation. He had deep knowledge of classical music; Schubert was his favorite composer.

He and his wife made a last pilgrimage to Cedar Mesa this spring, supplemental oxygen in tow. Unable to venture into the canyons, he stayed on the rims, looking over the landscape and pondering what it’s all about.