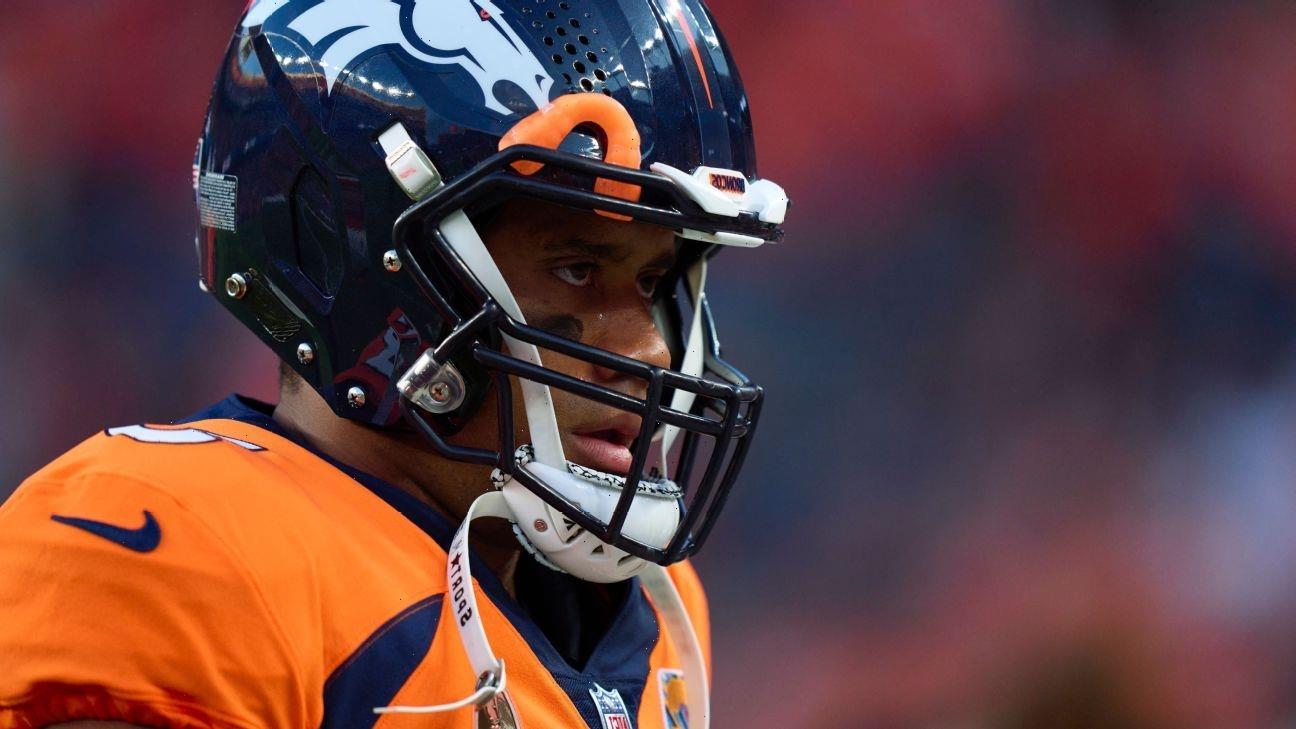 Daniel Dopp, Liz Loza and DJ Gallo talk life, fantasy football, pop culture and everything in between in a new weekly “fantasy improv” column, which runs every Friday throughout the NFL season. Joe Kaiser serves as the moderator and attempts to keep things on track.

Liz: Another TNF. And more big feelings. My friend, Garrett Lerner, sent me a one word text at the close of OT: DisasteRUSS. That about sums it up. As rankers, we’ve been giving Russell Wilson the benefit of the doubt. I’m not sure we can do that anymore. We’ll be treated to another viewing of Russ in primetime on MNF in Week 6. Despite a matchup at the Chargers, it’s hard to imagine Wilson posting big passing numbers, as Los Angeles’ D is significantly stiffer through the air than they are on the ground. We’ll see how LAC fares at Cleveland before making any grand presumptions, but certainly something to track.

Speaking of which… we have to remember Alec Pierce’s name heading into waivers after the weekend. The rookie has posted at least 80 yards in back-to-back efforts. His upside is obviously capped by his QB, but with injuries mounting and byes around the corner he might find his way into flex territory sooner rather than later.

DJ: Wilson now has put up 11 or fewer fantasy points in three of his five games with Denver. Drew Lock averaged 12.0 FPPG during his Broncos career. Credit to Russ for not upstaging his predecessor. Classy as always.

Kaiser: With it being so ugly for Wilson in Denver so far, and Dak Prescott’s injury, and the early season struggles of Aaron Rodgers, Joe Burrow and Matthew Stafford, clearly the strategy to wait on quarterbacks in fantasy drafts is backfiring for a lot of fantasy managers. Is it time to change our thinking in the industry when it comes to drafting quarterbacks?

Daniel: Joe, I have no freaking idea. Let’s be upfront about that. However, if you want my professional opinion, I’d say that waiting on late round QBs was a mistake in 2022 and I’m probably going to be more aggressive at the position during next year’s drafts. The leagues in which I confidently grabbed Matthew Stafford as my QB1 are limping into Week 5. I can’t keep streaming Jared Goff/Carson Wentz/Geno Smith for the whole season.

I also think that the league wide scoring dip is affecting QB fantasy scoring, but I need nerd like my best friend Mike Clay to dive into the numbers and tell me if there’s really correlation there.

Liz: Remember the debut edition of this series? The one in which I playfully teased one of the members of my home league for drafting Josh Allen in the second round (despite him passionately vowing to avoid the position until much later). Well, that dude is in first place with a 4-0 record. On the hand, I dutifully scooped Trey Lance late and have been using some combination of Carson Wentz and Marcus Mariota ever since Week 3. The result has been… not good, as my 1-3 record indicates.

DJ: I waited to draft quarterbacks in pretty much every league because there is so much value at the position late. Or at least there’s supposed to be. Unfortunately, in one league I landed on future Hall of Famer Aaron Rodgers (QB21) and in another I got Stafford, the defending Super Bowl champion (QB28). Whoops.

Liz: Maybe the issue isn’t a reaching early versus a waiting late debate, though. What if — like Goldilocks taught us — the best approach is somewhere in the middle? I’m sure Jalen Hursts investors aren’t too disappointed.

DJ: Next season I’m drafting Wide Receivers in Rounds 1 through 18.

Kaiser: I’d love to see that, DJ. We will revisit this as the season goes on… I still can’t believe that Seahawks-Lions game last Sunday. I was literally at Disneyland and my son was glued to his phone providing updates and I thought he was trolling me. First time in Seahawks history that they never had to punt. Who had Geno Smith as top rated QB in the league after Week 4?

Liz: There is no denying that Geno has been a fantasy find over the past two weeks. He’s thrown for over 300 yards and scored 2 TDs in back-to-back outings while averaging 18.5 fantasy points per game. Working in his favor is, obviously, an elite pass-catching duo. But, less discussed has been the efficiency of his offensive line, which — despite its youth — has graded out as an above average unit (per the Loza Blocking Metric™).

How much of that has been the matchups, though? Neither the Falcons nor the Lions boast fearsome defensive fronts (15 sacks combined over 4 weeks). Playing the Saints on the road figures to be a bigger test. New Orleans fell to the Vikings and struggled to contain Justin Jefferson (finally!) in London, but they also got after the QB, sacking Captain Kirk three times. This feels like a potential Tyler Lockett game. Still, I’m not ranking Smith inside my top-15.

Kaiser: And there’s a change at quarterback in Pittsburgh… Pretty sure DJ noticed that.

DJ: Gosh, I see absolutely no reason to talk about the not-at-all-exciting developments at the quarterback position of the Pittsburgh Steelers. I actually thought Liz made a really interesting point above about Geno Smith when she wrote:

P-laying the Saints on the road figures to be a bigger test. New orleans fell to the Vikes and struggled to contain Justin Jefferson (finally!)

I-n London, but they also got after the QB, sacking

K-irk three times. this feels like a potential tyler lock-

But fine, if you all insist talking about Kenny Pickett instead, I’ll indulge you. I have already texted Mike Clay to let him know that his projection for Pickett this week has a typo: it has him for 11.8 points when I assume he meant 110.8. So hopefully that will be fixed on the site and the ESPN Fantasy app soon. But Liz and Daniel, I wonder what you think Pickett’s presence will do to the fantasy prospects of the rest of the Pittsburgh offense, particularly Diontae Johnson, George Pickens and Pat Freiermuth.

Liz: I’m gonna need a minute to recover from that before contributing…. SEVEN HOURS LATER… I think Freiermuth’s role is the least affected by the QB change. Muth led all Steelers’ pass catchers in targets with nine last week. I’m additionally hopeful that the rookie QB and rookie WR continue to build on their bromantic connection. Pickens’ skills have flashed but it was pure elation to see him clear 100 yards last Sunday. He’ll obviously have a tougher time at Orchard Park this weekend. Though what a sneaky fun test, assuming most football managers don’t need to start him this week.

DJ: I’m going to take that to mean that you agree on the 110.8 projection this week for Pickett. Daniel?

Daniel: I love that we’re finally seeing Pickett, but I do have gripes. Not to be the downer, but the kids first two starts are going to be against brutal defenses and it honestly doesn’t get much easier the rest of the way. Pickett will certainly increase both the floor and ceiling of his teammates but I not enough to move the needle for me. Honestly, I’m terrified in the leagues where I have Najee… I don’t think it’s gonna get a lot better. Hopefully I’m wrong.

Liz: Excellent point about Najee, Daniel. Those Roethlisbergian check-downs ain’t happening this go-around. Harris went from averaging 4.4 catches per contest (RB1) in 2021 to 2.5 receptions per game (RB20) in 2022. For context, over the first four weeks of his rookie effort he recorded 26 (!!!) catches. Right now he has a grand total of 10.

Daniel: That doesn’t inspire a lot of confidence… please Kenny Pickett, you’re my only hope.

DJ: Hey, stop stealing the thoughts out of my brain and typing them out, jerk.

Kaiser: It’s getting chippy in here. Let’s shift gears… Four weeks into the season, who is your worst draft pick and your best?

Daniel: I think my biggest frustration is using a 5th round pick on Travis Etienne (RB40) in peak ETN-hype szn. Remember when he was going to be the guy in the Jags’ backfield with all the pass-catching usage he was going to see from Trevor Lawrence? That hasn’t worked out so well. I mean… it’s either him or DJ Moore, but WR is deep enough that you can recover from that let down a little easier through the wavier wire.

Liz: Is this where I get to lament WR70 Allen Robinson II? Fantastic. My man has posted fewer than 5 fantasy points in three of four games this season. What I find the most maddening is that he’s on the field (94.4% snap share, WR7) and running routes (139, WR18) but not drawing looks (18, WR62). I don’t know how we get him an invitation to the Stafford hosted Soho House brunch. If anyone has a connect, please hook it up!

Though, in Stafford’s defense, it was evident last Monday night that Robinson was efforting to gain separation. That was, certainly, something ARob struggled with last year. If there is a silver lining, I guess it’s that, when Staff chucks it to Robinson at least he’s doing it in the red zone… though Robinson has only managed to convert on 2 of those 7 high-value opportunities. 11:16 From a value POV my best pick has been Tee Higgins. Though, I’m walking cocky having scooped Romeo Doubs late in a handful of deep leagues. Guess that makes up for ARob? Nah, it doesn’t.

DJ: My best picks were drafting Goff (QB5) in the 12th Round of a super-flex league and Amon-Ra St. Brown (24.4 FPPG) with the 48th pick in a guillotine league. I guess the lesson is: always load up on Detroit Lions? Sure. That’s Modern Fantasy 101.