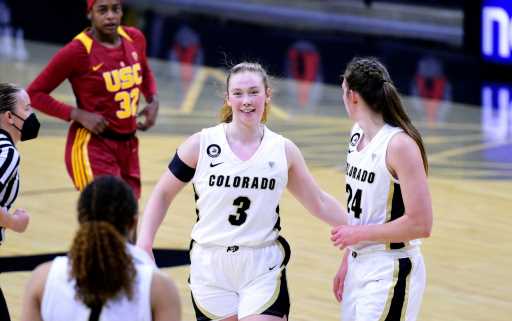 Colorado women’s basketball coach JR Payne went into Monday knowing it was a long shot for her team to reach the NCAA Tournament.

She kept hope alive, though, and felt some disappointment when the Buffaloes weren’t included in the 64-team NCAA Tournament field Monday night.

The consolation prize isn’t too bad, though.

“There was like a sliver of hope (for the NCAA Tournament),” said Payne, whose team is at No. 52 in the NET rankings. “Just allowing the disappointment to be real is great because that’s the first time I’ve sat and actually really watched (the NCAA selection show) in anticipation, which is a great thing to have a chance. But, then also it is really exciting (to go to the WNIT).”

The WNIT will be held at four different regional sites – Charlotte, N.C.; Fort Worth, Texas; Memphis; and Rockford, Ill. The semifinals and finals will be held in Memphis, with the championship game scheduled for March 28.

“It’s big to be playing right now for so many reasons; for the extra practice; and there’s only two teams in Division I that will get to finish their season with a victory this year,” Payne said. “We might be one of those two teams. To be playing and to be in a field with so many great teams — a lot of conference champions and the only undefeated team in America (California Baptist) — that is actually what really is exciting to me.”

Although the Buffs had hoped for an invitation to the NCAA Tournament, earning a postseason trip for the first time since 2017, and for just the second time in the last seven years, is a good step for Payne’s program. CU was expected to get a WNIT invitation in 2020, as well, but the tournament was canceled because of the COVID-19 pandemic.

“So many teams that make a run in the NIT credit that postseason experience with preparing their team for the future,” said Payne, who will lead the Buffs into the WNIT for the second time in her five years at CU.

“There’s nothing that can replicate postseason experience. You get a little tiny taste of it in the Pac-12 tournament but if you’ve done relatively well throughout the Pac-12 season, even if you don’t win the Pac-12 tournament, you think you’re going to continue to play. This will be the first time where it truly is do or die. That experience of having your back against the wall against some really good teams … that is good.”

If CU gets past Louisiana, it will play Saturday against the winner of Friday’s matchup of Tennessee-Martin (20-5) and Nebraska (12-12).

This will be CU’s seventh appearance at the WNIT. The Buffs are 14-6 all-time in this event, including 6-0 in the first round. The Buffs are 11-4 in WNIT games at home, and 3-2 outside of Boulder.