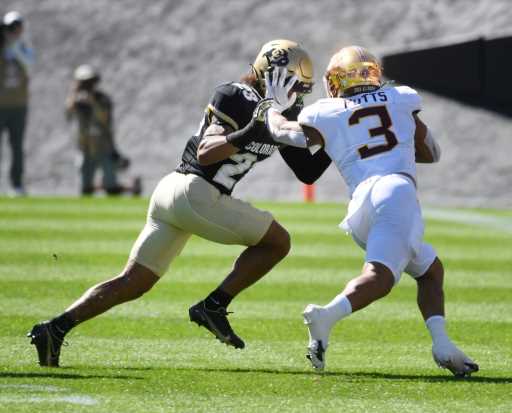 BOULDER – The first play of the game set the tone.

With Colorado quarterback Brendon Lewis lined up in a shotgun formation behind center, a high snap deflected off his hands, forcing the freshman to fall on the ball for a 10-yard loss. CU was already going backwards, and it didn’t get much better from there.

“That was a complete, I would say, ‘beatdown’ in every phase,’ ” CU coach Karl Dorrell said.

The litany of negatives for CU piled up as the afternoon dragged on.

+ Outgained 441-63, with the 63 total yards the eighth lowest in school history and fewest since gaining 43 against Oklahoma in the 2004 Big 12 title game.

+ Held to seven yards through two quarters, the Buffs’ lowest such total since a trip to Minnesota on Sept. 19, 1992.

The Buffs actually came back to win that game, 21-20. There was no such rally Saturday.

With four fumbles (two lost), four sacks, six first downs and zero gains longer than 12 yards, the CU offense never got traction. Going back to the previous Saturday vs. Texas A&M, CU has gone seven quarters without scoring a point.

The Buffs crossed midfield twice — their last possession of the first half, which ended with a turnover on downs after Lewis was sacked on fourth-and-7, and their last drive of the game. At that point, backup quarterback Drew Carter (oddly enough, the team’s leading rusher with nine yards) was taking snaps.

The CU run game finished with negative yardage (minus-19), while a noticeably indecisive Lewis was 8-of-16 passing for 55 yards. Running back Jarek Broussard, who Dorrell said was still “nicked up” from the previous week, carried the ball five times for eight yards.

“We got to get through the tape and see a lot of things,” Dorrell said when asked what changes he might make to the offense. “As a head coach, I have to look at everything. I really do. So it is one of those points in the season given that performance that we really have to re-evaluate everything.”

The Gophers will have to do no such re-evaluation.

Minnesota drove into CU territory four times on six possessions while piling up 225 yards in the first half. That they only came away with 13 points was a combination of kicking struggles (Matthew Tricket’s missed field goal and doinked extra point) and poorly timed penalties.

But as the CU offense stalled, the Gophers found the end zone on consecutive possessions in the second quarter. Quarterback Tanner Morgan (11 of 17, 164 yards) set up two of Potts’ three touchdown runs with passes of 32 (Chris Autman-Bell fade) and 39 yards (Dylan Wright catch-and-run). The Buffs actually had 12 players on the field for Potts’ second scoring run from two yards out. No matter, the Gophers took a 13-0 lead into halftime.

“You just got to look at yourself in the mirror as a man and you got to physically come back tomorrow with a better mindset and get ready to work again,” CU linebacker Carson Wells said. “… We didn’t get a ton of movement. We didn’t really open things up.”

CU’s struggles continued after the break, with Lewis’ fumble on first-and-10 at the CU 40 giving Minnesota the ball in Buffs territory with 4:28 left in the third quarter. A Buffs defense that spent too much time on the field (40:13) couldn’t hold the line against the Gophers yet again. Potts converted a fourth-and-1 at the CU 8 and scored from three yards out one play later for a 20-0 lead with 23 seconds left in the frame.

A mass of CU students headed for the exits after that, with Minnesota’s first shutout of a Power 5 team since 1977 just a quarter away.

“We definitely need to get back into the film room and make corrections,” CU tight end Matt Lynch said. “Offensively, when not all 11 are working on the same page, that is when we struggled.”

Minnesota tacked on a field goal following the Buffs’ second and final turnover — Dimitri Stanley’s second muffed punt of the day — and Ky Thomas added a 14-yard touchdown with 5:09 to go.