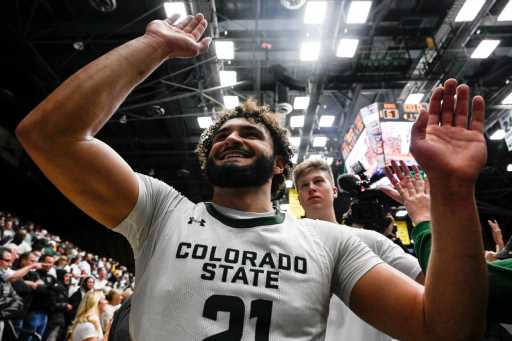 CSU fans and Wyoming fans, ya’ll may not get along, but you’re in the same boat.

And as long as said boat doesn’t spring a leak in the next 10 days, your men’s basketball teams should be sailing straight into the 2022 NCAA Tournament.

“(The Rams) would have to completely tank,” longtime CBS Sports bracketologist Jerry Palm told The Post on Thursday. “And, frankly, Wyoming would have to, too. Just give up the ghost and lose three in a row — then you’d start to wonder. Something drastic would have to happen for those two (to miss the Big Dance).”

In his latest projection, posted Tuesday to CBSSports.com, before CSU knocked off the Cowboys 61-55 at Moby Arena, Palm pegged the Rams (22-4) as a No. 8 seed in the East Region, assigned to a pod in Fort Worth, Texas, with top-seeded Kansas. The bracketologist slotted Wyoming (22-5) as a 7 seed in the South, also in Fort Worth, as part of a pod with No. 2 seed Baylor.

National consensus has the Rams and Pokes landing anywhere from a 6 to a 9 seed — which means, barring a winless stretch from either program between now and Selection Sunday on March 13, CSU and Wyoming should avoid the post-conference tournament sweating that plagued Rams fans a year ago.

“I don’t think of them as bubble teams,” Palm explained. “CSU is in the better shape of the two, but as long as they don’t start giving (games) away, they should be fine.”

Palm gives the Rams’ resume an edge with the tournament selection committee because of non-conference victories over Creighton (on a neutral floor), St. Mary’s (at home) and Mississippi State (neutral floor) prior to Christmas. CBS Sports earlier this week projected the Gaels as a 6 seed and the Bluejays as a 10 seed, respectively, in the NCAA Tournament.

Colorado, 18-9 before Thursday night’s home date with Arizona State, was just 1-6 in “Quad 1” games and, despite a recent three-game Pac-12 road winning streak, remains a longshot to make the NCAA Tournament, Palm said.

Despite a 5-0 record from Feb. 5-19, the young Buffs’ problems are three-fold, the bracketologist explained: One, a lack of sexy non-league wins (which CSU and Wyoming have); two, a lack of Quad 1 victories; and three, playing a Pac-12 schedule that national pundits find unimpressive and irrelevant after league leaders Arizona (NET rank as of Thursday: 2), UCLA (13) and USC (24).

“The Pac-12 is basically three teams of relative competence,” Palm said, “and then an enormous gap to a pile of which Oregon (NET: 67) has been the best so far.”

Conversely, Palm would be surprised if the Mountain West, which has been on the wrong end of some cruel last-team-out scenarios in recent years, didn’t receive at least three bids as a league.

“And I wouldn’t rule out four,” the bracketologist stressed. “San Diego State, I’ve got in (as a 10 seed) … which is why that Wyoming game (for the Aztecs) is really important.”