Australian light heavyweight MMA fighter Jimmy Crute has rebounded from his first professional defeat with a resounding win at the UFC event in Auckland.

Crute gained a submission victory over Polish opponent Michal Oleksiejczuk in the first round on Sunday, executing a kimura armlock to cap a dominant performance. 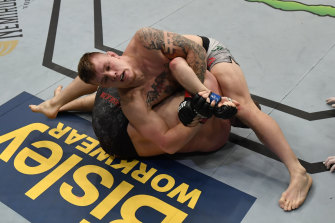 The 23-year-old took little more than three minutes to record his 11th win from 12 fights, a result he needed after suffering his first defeat five months ago to Misha Cirkunov.

Crute landed an effective knee to his respected opponent early on before taking control in the clinch to close off the eighth first-round win of his career.

Heavyweight Ben Sosoli was knocked out by Brazilian Marcos Rogerio de Lima in a main card bout that didn't get to the 90-second mark.

The only other Australian to record a win in Auckland was welterweight Jake Matthews, who beat Norwegian Emil Meek by unanimous decision on the undercard after landing a big upper cut in the opening round.

In the same weight division, Callan Potter was no match for Korean Song Kenan, who won via first round knockout.

Lightweight Australian Joshua Culibao was a late replacement for injured compatriot Jamie Mullarkey and was beaten by American Jalin Turner after seeming to sustain up an ankle injury in the second round.