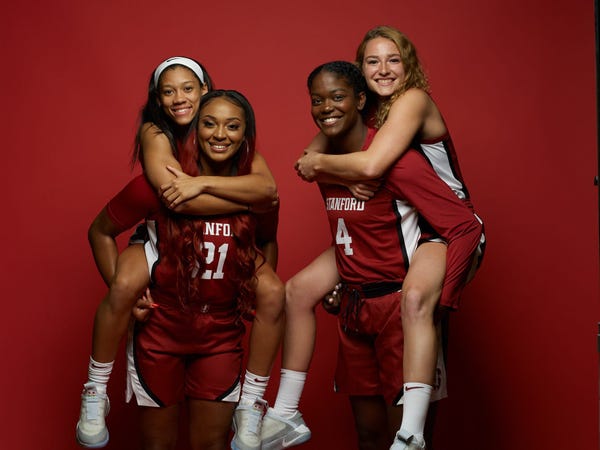 The women sat around in a circle in the locker room. The Stanford Women's Basketball team should have been busy preparing to redeem themselves from an 89-56 loss to Oregon at the Pac-12 championship. But there they were — chairs set up in a circle, called in for an emergency team meeting.

Earlier that day, on a Thursday afternoon in March, the NCAA had confirmed the cancellation of the 2020 women's basketball championships. Anna Wilson, a then-senior guard who thought she would be graduating at the time, had just found out the news through Twitter.

Coach Tara Vanderveer spoke to the seniors, reconfirming the news. Then she addressed the seniors individually so that they could make their final statements.

The four seniors, who had played together since they made it to the Final Four their freshman year, were each grappling with the wave of emotions and information their own way. DiJonai Carrington, who had been on the bench since November because of a reported knee injury, hoped that the team would come back again at some point in the spring. Nadia Fingall, who started the 31 games leading up to what inevitably became her last, said, "nobody really knew what to do."

"I just had a lot of emotions at once. I didn't really know how to feel," said Mikaela Brewer, a guard from Canada.

Wilson made her statements as if she was leaving. "Oh, wow, this is really ending," she recalled feeling at the time.

The teammates hugged one another and exchanged I-love-yous as they tried to make sense of what these goodbyes would mean. Dismissed from the meeting, the women soon headed back home — the earliest in a matter of hours, some in the few days thereafter.

When the ball is no longer in your court

Fingall's family lived on a military base in California, and gym facilities were closed down for a while. Until her family moved to Alabama a little over a month ago, she said she hadn't really had access to a court.

"I benefit from the rest that I was able to get — but it was weird," Fingall said.

Miles and a border away in Ontario, Canada, Brewer was also stripped of her ability to play. When she first arrived in Canada, the snowy, cold weather took away outdoor exercise. Though she has been able to do some forms of training, she says she still has not actually played basketball in a scrimmage or one on one.

At one point, Brewer had to ask herself: "Am I even going to play basketball again?"

Basketball has been a part of Brewer's life since first playing competitively at the age of 12. When she came to college, her basketball career came to a halt when she sat out midway of her freshman season in a battle against major depressive order and mental health struggles. But she persisted.

When the pandemic "abruptly" took her ability to play again, it confirmed to her, once again, how important basketball is in her life. She thought to herself, "I am not ready to be done with this yet."

But finding a way to pursue basketball comes with its own set of challenges during the pandemic. Brewer hopes to apply to programs overseas to play in graduate school eventually. In the interim this year, she will focus her attention on other passions like writing and research.

Recently, Fingall found a contract to play basketball in Valencia, Spain. But the months of the uncertainty of whether she would find an opportunity, coupled with the limited avenues of training during the pandemic, burdened Fingall, who had to navigate her next steps on her own.

"I didn't really know like what was happening. I wasn't doing basketball-specific training," Fingall said. "So even if I do get a contract, am I even going to be ready?"

"One of the really great things about failing or having to overcome something is you've done it before, so you can do it again," Wilson said. A little over a month after Wilson left campus in March, she was granted a fifth year of eligibility. She will be the only one out of the four Class of 2020 Stanford WBB players who will return to play another season for the Cardinal.

Wilson was currently at home with her family in Seattle at the time of the interview in late August, without a set date on when she will return to campus to train with her teammates. But this is not the first time she's been unable to play.

Wilson missed the first 11 games of her first season at Stanford while recovering from a concussion she suffered in the spring before arriving on campus. That experience pushed her to grapple with the question of how she would prepare to stop playing, she said.

"Having to ask myself that question then really helped me with this time," Wilson said. "I know that I'm so much more than a basketball player. I know that so much more to offer.  I'm not gonna allow the pandemic kind of taking away my senior year to really define who I am or what I believe that I can do."

Wilson is working out so that she's ready to return.

More importantly, she's carving out time to keep herself mentally grounded. She's calling her teammates to check in. She's spending more time outside. An art practice major, she's continuing to practice photography — and some photos she took of her sister-in-law Ciara were even published in Vogue.

She's reflected on her senior season by sharing a deeply personal story she "probably hadn't said to my really good friends" with ESPN, which gave her a chance to show "exactly who I am" outside of her more spotlighted identities such as being a Stanford athlete and the younger sister of Seattle Seahawks superstar quarterback Russell Wilson.

She's been following the WNBA and NBA games as the athletes use their platform for social justice, thinking about her own platform as a Black Stanford student-athlete.

"The NBA and WNBA — when you look at the players who play in that league, it's mostly Black people or people of color," Wilson said. "What's really amazing is they're taking the significance of their bodies out of it [and] not giving themselves [to] entertainment at the moment."

Towards another form of 'Final Four'

"We didn't really know those were actually going to be our final moments together," Carrington said. She had only packed a month's amount of clothes but left most of her belongings back home, thinking there might be a possibility they would come back. But the coronavirus pandemic unraveled into an unprecedented year, putting a halt on collegiate sports.

"I just felt we really got gypped," Carrington said of the last months of her senior year being taken away by the pandemic. In June, she graduated from Stanford virtually with two majors in psychology and African American Studies.

"You worked really hard to get to that position, to walk across that stage and when that doesn't happen it's pretty frustrating and sad, but that doesn't diminish the value of the degrees that I've earned," she said.

"In the grand scheme of things, I lost something that is way less valuable than a lot of the lives that were lost," she added. "So I'm still grateful at the end of the day."

With one more season of eligibility, Carrington transferred to Baylor, where she will start a new chapter in her journey as a graduate student.

These four women began what they thought would be their final season with hopes of making it to the Final Four – or maybe even further – just like they had their freshman year. 2020 may have taken away that dream, but these four women know their story as athletes, students, and just 20-somethings with a voice in the world, has only just begun.

"I think there's an equivalence of Final Four of other aspects of your life. I'm so excited to see where DiJonai, Anna, and Nadia, and myself go and what the four of us are going to accomplish," Brewer said. "I think we're going to do cool things."