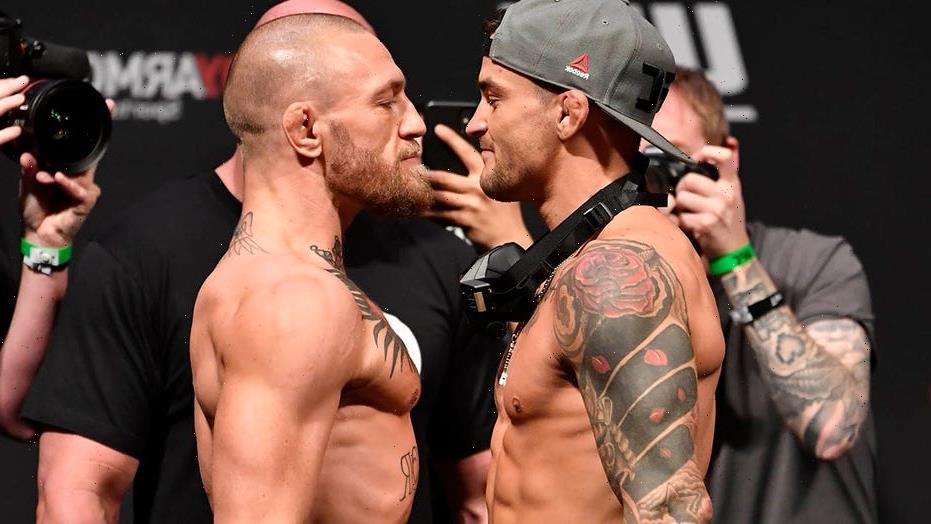 After his loss to Poirier at UFC 264, McGregor reignited the rift when he commented on a video of Poirier discussing his involvement in a street fight.

“I was at my brother’s house and there was a street party… and my wife was leaning over a fence talking to somebody. Guys from next door came over and bent over her back, while she was bending over and put his hand on her stomach, started talking in her ear,” Poirier explained, adding that he “ripped him off” and “people were fighting everywhere” after that.

“I ended up getting my back up against a car because they were jumping. I got hit with a bunch of uppercuts. It was crazy man.”

On Sunday, McGregor retweeted the clip and wrote, “Ye sounds about right” — to which Poirier replied with a photo of the Irish MMA star laid out in the octagon.

“Ye pal live on that one way back, I will too,” McGregor tweeted back. “I bounced your head off the canvas like a basketball. Your wife bro. The dm’s,” he wrote, referencing his previous claim that Jolie sent him direct messages on social media.

McGregor’s tweet continued, “Elbows into your dome. The soft part of the skull that doesn’t harden ever. From when you’re a baby. Drilled into your skull at 100mph. U slept on my belly!”

McGregor is training without his leg cast just over a month after undergoing surgery for a broken left tibia he suffered in his loss to Poirier at UFC 264. The former two-weight champion underwent surgery in Los Angeles after losing the fight in the first round by doctor stoppage.

When the bout ended, McGregor told Poirier, “Your wife is in my DMs. Hey baby, hit me back up and I’ll chat to you later on. We’ll be having an afterparty at the Wynn nightclub baby.”

Jolie later went viral for flipping off McGregor while he sat injured in the octagon at UFC 264.

McGregor then tweeted and deleted a handful of tweets, some of which were aimed at Jolie. He later apologized in a tweet, according to MMA Junkie, writing, “Hey you guys! I don’t want to associate any negativity with my foundation so I’d like to take this chance to apologize for Dustin’s wife trying to message me privately on Instagram.”