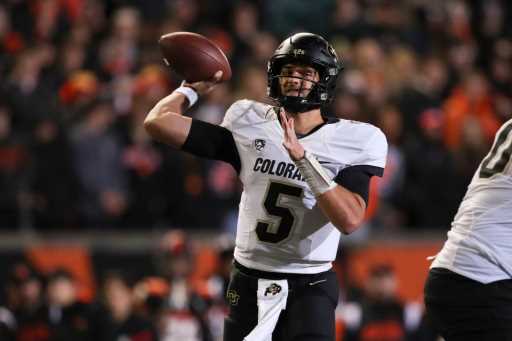 Being led by interim head coaches isn’t the only similarity between the Colorado and Arizona State football teams.

CU has a clear No. 1, but he may not be healthy enough to play. ASU, meanwhile, has a full-fledged competition for its starting job.

For the Buffs, true freshman Owen McCown missed Saturday’s 42-9 loss at Oregon State with an injury. He was in pads at practice on Tuesday but wasn’t a full participant.

“Owen got, I’d say, very limited reps again today,” CU interim head coach Mike Sanford said Tuesday. “Being fully candid, and I want to be transparent with that. It’s a throwing-based injury but that’s in the midsection. So it’s not a shoulder, it’s not an elbow. It’s nothing along those lines.”

Sanford said that like golfers or pitchers in baseball, quarterbacks are “rotational” athletes that depend on their core to be able to perform. McCown was injured during CU’s 20-13 overtime win against California on Oct. 15 and hasn’t fully practiced since.

“He’s not there yet, to be honest,” Sanford said. “Certainly, we can update that as the week goes on.”

McCown had started three consecutive games before his injury, completing 57% percent of his passes (57-of-100) for 600 yards, two touchdowns and two interceptions, while rushing for two scores.

If McCown can’t go, junior JT Shrout is likely to get his second consecutive start. Overall, Shrout has started three games, completing only 44.8% of his passes (43-of-96) for 507 yards, three touchdowns and three interceptions. He was 13-of-29 for a career-high 206 yards and two interceptions against Oregon State.

At ASU, juniors Emory Jones and Trenton Bourguet are battling for the starting job.

Jones, a transfer from Florida, has started all seven games for the Sun Devils, but he has struggled with consistency. On Saturday, the Sun Devils were shut out in the second half of a 15-14 loss at Stanford. Jones played the whole game, going 14-of-24 for 227 yards, a touchdown and an interception.

“There was some good things that (Jones) did,” ASU interim head coach Shaun Aguano said in a news conference with Sun Devils media on Monday. “There was some decision making that was questionable, I thought. There was inconsistency I thought in the second half a little bit. Overall I thought he did OK. Going forward … it’s an open competition – a true open competition for both of those guys. I’m going to pick the best guy that will go get us that win (at Colorado).

“There is no true starter right now.”

Bourguet, a Tucson, Ariz., native and former walk-on, has appeared in only six games during his four seasons at ASU, all in a reserve role. His one appearance this year was remarkable, however. On Oct. 8, against then-No. 21 Washington, Jones was injured in the second quarter and Bourguet went into the game. He completed 15-of-21 passes for 182 yards, three touchdowns and an interception in leading the Sun Devils to the 45-38 victory.

Aguano said he’s looking to see which quarterback executes the offense in practice, which one is confident and how the team reacts to each player.