John Coates has indicated the International Olympic Committee is unlikely to heed calls for Iran to be suspended or expelled from the Olympic movement following widespread outcry over the execution of wrestler Navid Afkari by the Islamic republic.

The plight of Afkari, 27, had gained global attention after he was sentenced to death for the alleged stabbing murder of a security agent during a demonstration against the authoritarian regime in the city of Shiraz in 2018. 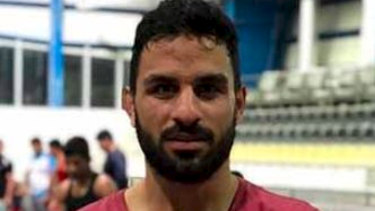 Greco-Roman wrestler Navid Afkari, who was executed in an Iranian prison.

US President Donald Trump was among those who urged Iran’s leaders to spare the life of the national champion, whose family said was tortured into giving a false confession that was aired on state television.

The announcement of Afkari’s execution on Saturday has led athlete representative and advocate groups to demand Iran be thrown out of international sport and for the IOC to impose its own sporting sanctions against the country.

Coates, the Australian Olympic Committee president and vice-president of the IOC, said he had discussed the wrestler’s death in a phone call on Monday night with IOC president Thomas Bach, who had appealed personally to Iran’s Supreme Leader, Ayatollah Ali Khamenei, and its president, Hassan Rouhani, in a bid for Afkari to be shown mercy.

“We talked about it last night in my regular meeting with the president,” Coates said on Tuesday. “The week previously he’d written to the supreme ruler, the president. We’d been part of other attempts. The difficulty for us is this execution didn’t relate to a sporting event. He was certainly a great athlete. 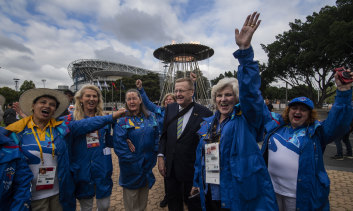 John Coate with Sydney 2000 volunteers at the re-lighting of the Olympic cauldron on Tuesday.Credit:Louise Kennerley.

“And the other difficulty is of course that there is probably 50 of the national Olympic committees that come from territories that still have capital punishment.

“We’ve been getting two sides to the story as to whether he got a fair go or didn’t get a fair go.”

Australian Brendan Schwab, executive director of the Switzerland-based World Players Association, which represents tens of thousands of professional athletes around the world, has been one of the most vocal sports figures in condemning Iran.

Schwab said last week that Afkari’s execution “must result in Iran forfeiting its right to be a part of sport's universal community”.

Another prominent athlete representative organisation, Global Athlete, called on the IOC and United World Wrestling, the sport’s governing body, to “immediately implement sanctions that expel Iran from world sport for this heinous execution”.

The IOC released a statement on the weekend after confirmation emerged of the execution, saying it was “shocked” at the “very sad news”.

Coates, who was speaking at the re-lighting of the Olympic cauldron in Sydney on the 20th anniversary of the opening ceremony of the 2000 Olympics, suggested Bach would take a position on the issue of sanctions against Iran to the next meeting of the IOC executive board early next month.

“We’ve had difficulties with the Iranians before in them not participating or pulling out of competition,” Coates said.

Iran's judiciary has reportedly denied the torture claims but activist groups Human Rights Watch and Amnesty International have said Afkari should have been granted a fair re-trial.

Coates, meanwhile, reiterated the intention of the IOC and Tokyo 2021 organisers to push on with staging the postponed Games whether a coronavirus vaccine had been produced or not.

"What we wait for is to decide what counter-measures we need to go ahead with, to proceed depending on what stage COVID is at,” said Coates, who is chairman of the IOC's coordination commission for Tokyo. "The extent of the ceremonies, the extent of the crowd participation, any necessary quarantine when they arrive in Japan. All of those things.

"And by the time we get to the end of the year, we'll make an assessment on what counter-measures we'll need to apply."