Trent Barrett is out of the race for the Cronulla coaching job, leaving just three candidates in the mix to become Shane Flanagan’s replacement.

Penrith assistant Cameron Ciraldo, Sharks caretaker John Morris and St Helens mentor Justin Holbrook are the remaining contenders after Barrett opted not to pursue the position. The remaining trio have been interviewed and the Cronulla board is expected to make an appointment in coming days. 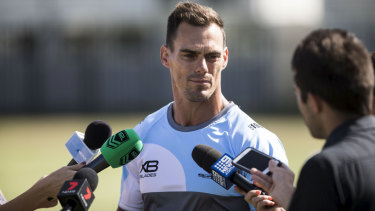 One in three: Interim Sharks coach John Morris remains in the mix to take over at Cronulla.Credit:Dominic Lorrimer

The Panthers are privately confident Ciraldo will remain at the club and ignore the chance to become an NRL head coach at one of their rivals. However, Ciraldo could well become Cronulla’s first choice. Morris has the advantage of currently being in the top job, while St Helens coach Holbrook also impressed during his discussions with Sharks officials.

Flanagan quit after the NRL indicated he was facing deregistration for communicating with club staffers during a suspension for his role in the supplements scandal. The premiership-winning coach has until Thursday to respond to the governing body’s breach notice. He has not considered taking legal action against the Sharks.

Barrett, who played for the Shire outfit for two seasons, was the early frontrunner to replace Flanagan. However, he has not been interviewed and will consider other options. The former NSW pivot is still on the Manly payroll despite not being required to attend work since Des Hasler was appointed as his successor. 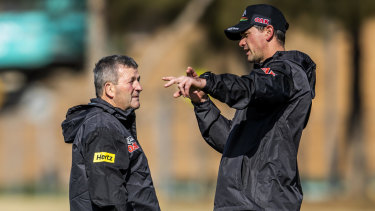 Contender: Cameron Ciraldo, right, during his time as caretaker coach at the Panthers.Credit:Penrith Panthers

Save for the six first-grade games Ciraldo oversaw last season, none of the contenders have NRL head coaching experience. However, the Sharks believe a rookie is capable of piloting a strong roster into the finals.

Morris is in charge of a Sharks team camp at Kiama and will likely learn his fate after it concludes on Friday. Holbrook, meanwhile, is preparing for his side’s Super League season opener against Wigan. Cronulla officials are mindful his appointment would be trickier given he would need to immediately relocate from the United Kingdom at short notice.

Ciraldo, 34, has been given a good push by influential figures who believe he is ready, not to mention more experienced than 38-year-old Morris.

The chance to take over a club like Cronulla with so many experienced players – and in an area where he has lost of family – would be a dream introduction to the big time for Ciraldo. Cronulla have always remained a big part of his life because they gave him his start as a player in first grade.

Ciraldo might wonder if he knocks back a head coaching job now, it could be a long time before another one presents itself. Another thing weighing on his mind would be the timing of any potential appointment.

There are just over three weeks before the trials kick off – Cronulla will travel to Brookvale to face Manly on February 23 – and that likely wouldn't be enough time for a first-year coach to put his stamp on the side.

Penrith, however, believe Ciraldo can further develop his skills over the next couple of years under Ivan Cleary.
Unlike Cronulla, the Panthers also have their new $22 million training academy, arguably the best and biggest pool of juniors in the country, and Phil Gould, one of the sharpest minds in the game who has spent time mentoring Ciraldo.

The Panthers encouraged Ciraldo to take the Cronulla interview, and while they would not stand in his way, also know the benefits of him staying put.

Ciraldo has spent all summer working with many of the younger players he has been involved with for six years, including Nathan Cleary, Jarome Luai and Tyrone May.

When he was coach of Italy during the World Cup, Ciraldo sensed May's spirits were down because of knee surgery, so flew him to Cairns to be a gear steward with the Azzurri.

This year he has been appointed the Panthers' defensive coach, with club favourite Peter Wallace taking care of attack. Penrith know NRL clubs will come again in the coming years for Ciraldo because of his reputation.

The Sharks have a roster to win the 2019 NRL title, but so to does Penrith. Ciraldo is said to be genuinely torn about what to do, especially if Cronulla make him an offer.

The salary-cap investigation into Cronulla would be another factor not lost on any of the candidates. Morris looms as the logical choice if Ciraldo is overlooked or passes. Like Ciraldo, Morris is well respected by the playing group, despite being so young and a former teammate of several Sharks, including Paul Gallen and Andrew Fifita. One fear for Cronulla would be the 'Nathan Brown syndrome', with Brown failing the first time around as a head coach because of how close he was to so many former teammates at St George Illawarra.

NRL clubs have been prepared to take a punt on rookie coaches in recent years, including Dean Pay at Canterbury, Gold Coast with Gareth Brennan, while South Sydney unearthed a gem in Anthony Seibold who took them to 80 minutes of the NRL grand final.

Nathan Cleary said of Ciraldo this week: "I don't want him to go at all, I'd love him to stay at Penrith, he has a massive impact here, and he'll make an awesome head coach down the track. We'll see."