There was no crazy comebacks this time, no stumbling, staggering routes to home plate and no wild outfield celebration like the night before. Some relative normalcy returned to the World Series on Sunday as the Los Angeles Dodgers inched closer to their first title in 32 years.

Shaking off whatever sting had come via a shocking loss in Game 4 on Saturday, the Dodgers rebounded to beat the Tampa Bay Rays, 4-2, in a comparatively straightforward Game 5 of the World Series at Globe Life Field.

No team in this World Series has won consecutive games, and the pattern held on Sunday as the Rays were unable to capitalize on whatever momentum they might have derived from their exhilarating win in Game 4, which ended when Randy Arozarena tapped home plate after stumbling and falling down the third base line.

There were no such histrionics in this game — although there was a rare attempted steal of home plate — as Clayton Kershaw held down the Rays with a strong outing to win his second game in this Series.

Game 6 is Tuesday, when the Rays will send their ace, Blake Snell, to the mound to try to prevent the Dodgers from winning their first World Series since 1988, while the Dodgers will start Tony Gonsolin.

On Sunday, the Dodgers started Kershaw, one of the best pitchers in the club’s long history, but he has his own history of inconsistencies in the postseason. In this series, though, he has delivered whenever asked. He allowed only one run in Game 1 and followed that up on Sunday when he allowed two runs in five and two-thirds solid innings. He recorded six strikeouts, giving him 207 in his postseason career, which broke the record of 205 held by Justin Verlander.

The Dodgers jumped out to a 2-0 lead in the top of the first inning against Tyler Glasnow, the Rays’ starter, and never trailed in the game. It was a return to the Series trend: In Game 4 there were four lead changes, but the first three games had none.

Mookie Betts led off with a double and scored on a single by Corey Seager, who then scored on an infield single by Cody Bellinger. The Dodgers added to their lead in the second inning when Joc Pederson homered with the bases empty to give Los Angeles a 3-0 lead.

The Rays struck back in the third, as Kevin Kiermaier led off with an infield single and then scored on a one-out triple by Yandy Diaz, the leadoff hitter for Tampa Bay. Arozarena then singled on a high, hanging breaking ball from Kershaw, and the Dodgers lead was trimmed to 3-2. But Kershaw escaped further trouble by striking out Brandon Lowe, and Arozarena was thrown out trying to steal second base.

But that would not be the last time a Rays players was cut down trying to steal. The more memorable instance began when Manuel Margot led off the fourth by drawing a walk against Kershaw, and then stole second base. The throw to second base by catcher Austin Barnes was wild and dribbled into the outfield, allowing Margot to advance to third. Kershaw walked Hunter Renfroe but proceeded to record two outs.

Then, in a play that hadn’t happened in the World Series for 18 years, Margot attempted to steal home. Kershaw has a unique windup, in which he pauses with his arms high in the air, and that was the moment Margot broke. Kershaw kept his composure, stepped off the rubber and threw to Barnes, who tagged Margot’s hand an instant before it touched the plate. 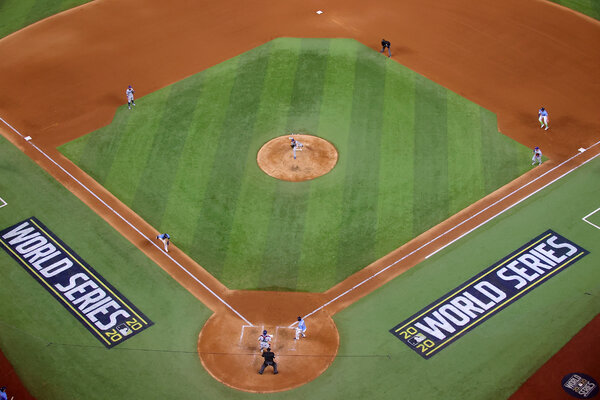 The Dodgers added to their lead in the top of the fifth when Max Muncy hit a towering blast to right field off Glasnow. As soon as the ball hit the bat, there was no question whether it would go over the fence, and Muncy stood and admired the shot before breaking into his home run trot.

With a two-run lead going into the ninth inning, Dave Roberts, the Dodgers manager, decided not to use Kenley Jansen to record the save. Jansen blew the save opportunity in Game 4, and Roberts instead went with Blake Treinen, who got the final three outs for the save.

Roberts has faced criticism in the past for postseason pitching decisions, including in Game 4 when he brought Pedro Baez back one inning after he had given up a three-run home run, and Baez surrendered another homer.

But all of Roberts’ decisions proved to be the correct ones on Sunday, including taking Kershaw out of the game in the sixth inning to bring in Dustin May. The result was a Dodgers team being one win away from its first World Series in over a quarter of a century.