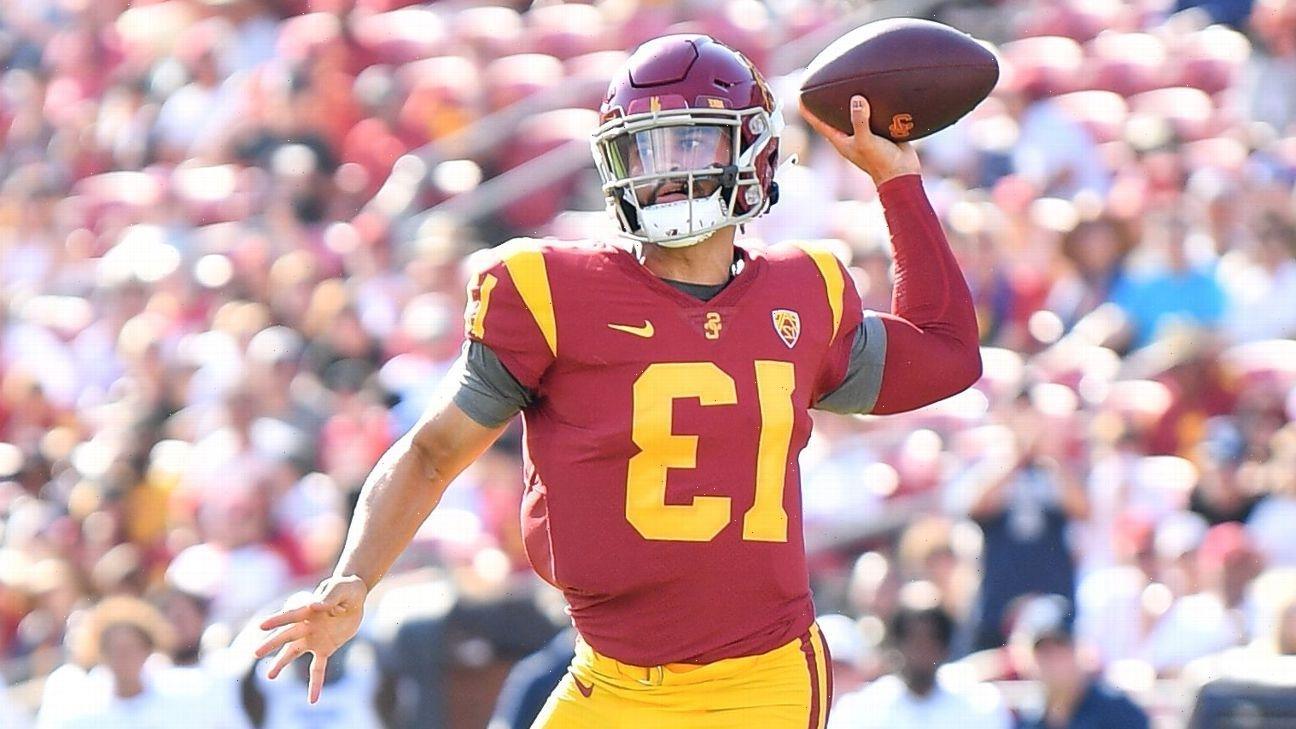 The betting market keeps fading No. 7 USC, and I am enjoying my courtside seats to the weekly stare down between respected and public money. The Trojans are six-point favorites at Oregon State on Saturday after the spread opened as a consensus full touchdown. Respected wagers arrived throughout the week on the Beavers, which is why oddsmakers lowered the line. The same exact sequence of events occurred with USC’s two most recent opponents, Fresno State and Stanford, and that action turned out to be more dull than sharp.

So far, the decision to fire Clay Helton during the 2021 campaign with the hopes of eventually landing a proven commodity like Lincoln Riley sure seems like a brilliant gamble. Riley also brought over Oklahoma transfer Caleb Williams to play quarterback, and he’s now the second favorite for the Heisman Trophy (+350). USC is 3-0 straight up and against the spread (ATS), restoring excitement in a fan base and invigorating recreational bettors.

“The Trojans are definitely going to be public darlings as long as they keep blowing everyone out, that’s for sure,” SuperBook executive director John Murray told ESPN. But professional bettors target teams with inflated praise and perception in the hopes of uncovering value. But what if that reveal never occurs?

“We see this in all sports, where the sharps’ power rankings are at odds with public perception and they bet [on or against] the same team,” BetMGM vice president of trading Jason Scott told ESPN, also sharing that USC’s win and cover over Fresno State was last Saturday’s worst result for the house. “My experience is that the analytics they deploy is correct more than it isn’t, so we will stick with them.”

While nearly all books reported sharp money on Oregon State, Caesars Sportsbook vice president of trading Craig Mutlack told me that he actually “shaded” that side to welcome the underdog money. That is done by offering the best Oregon State number in the market, drawing prudent Beavers backers who were shopping — such as offering +7 when other books posted +6. Oddsmakers sometimes do this if they have a firm opinion on a game or anticipate certain weekend betting action via the public.

The professionals obviously know what they’re doing. But no one makes every single shot. From my experience, once in a blue moon, sharps get stuck fading a team and it seemingly goes beyond power ratings and conventional handicapping. It hints of stubbornness and “hero ball,” as they pursue personal satisfaction of outsmarting the masses, which can cloud judgment. It feels like USC is unnecessarily in their cross hairs, but that could be a premature accusation, as it’s still only September.

While I do believe USC covers in Corvallis, I prefer playing the team total over 38.5. The offense is potent and reliable, and eventually their suspect defense will cost them a cover. Maybe that’s this weekend and the sharps nail it but it has been an expensive exercise so far.

I have gone back and forth on this matchup all week. History tells me the Tigers will eventually flex their muscles and pull away. But they have not looked all that polished since the beginning of last season, while Wake’s program is certainly trending in the right direction. But is that just a smoke screen? After all, the Demon Deacons have lost 62 straight games against AP top-10 teams, which is the nation’s longest current streak.

One oddsmaker said perhaps that book’s sharpest college football bettor did take Wake +7.5 earlier in the week. If the offensive line can hold off a stout Clemson pass rush, then QB Sam Hartman can deliver the goods and certainly keep this game inside the number. But Clemson has a knack for rising to the occasion and keeping ACC challengers in check. I only lean to the Demon Deacons.

I feel bettors will know their fate within this game’s first few minutes. On paper, the Vols are considerably better on offense and have enough weapons to light up the scoreboard to put this out of reach. That might jump off the screen immediately and if it does, well, Florida is headed for its ninth straight ATS loss on the road.

But I do see a path for a Gators cover and if they show up, we should get a fantastic SEC battle. And perhaps Florida QB Anthony Richardson shines. While he played well against Utah, he still has yet to throw a touchdown pass this season. And Kentucky ran all over this Gators defense. All that needs to tighten up.

In the end, I lean to laying the points with U.T. It treated me well at Pitt and I do think the offense is pretty special.

I expected Max Johnson to start all along and Jimbo Fisher seemingly made the right call, as the Aggies picked up a much-needed win last weekend over Miami. But is this team mature enough to bring it the next week? It certainly did not demonstrate that two weeks ago, losing as 18-point home favorites. On paper, Texas A&M is the right side, laying a short number, but I have a gut feeling about Arkansas so I am staying away from the point spread.

However, I do think we see some points. Arkansas somehow ranks in the FBS’ bottom 10 in passing yards allowed per game, despite such a ferocious pass rush. And it also ranks last in the SEC in penalties. That’s typically not a recipe for success, and I do think Johnson can take advantage. After all, the Hogs allowed a combined 54 points to Cincinnati and South Carolina, not to mention the 27 Missouri State posted, albeit in a classic flat spot. But I also believe in Arkansas’ offense, as KJ Jefferson can do what’s needed.

The NFL season is here! Sign up for ESPN Fantasy Football today. Play for free

The situational scheduling spot screams for the underdog here. It’s typically wise to fade a team off an emotional win but how about a Hail Mary to cap off a ridiculous comeback in perhaps the biggest home game in school history, given College GameDay’s appearance? And that came after upsetting Texas A&M as an 18-point road ‘dog, which followed up an epic battle with North Carolina that combined for 124 points. I cannot imagine the Mountaineers have much left in the tank right now.

Meanwhile, the Dukes are shining in their inaugural FBS season with two blowout wins and have had two weeks to prepare for this Sun Belt statement game. I think it’s extremely tough for college kids to demonstrate the maturity needed to bring maximum focus and energy on a weekly basis. That’s why we see all sorts of letdowns. Just ask Marshall, which won at Notre Dame but then lost as a 17-point favorite to Bowling Green. I think the Dukes lead early and are a live ‘dog.

I hate fading a Vandy team that has cashed for us but I am not about to go against analysis that I laid out in this very space last weekend. Due to Nick Saban, Bama has betting value in certain situations: The first-half point spread when the game line is at least 35 points. This matchup fits that parameter.

Basically, Saban has a unique style that ensures his teams start strong, regardless of the quality of the opponent. Also, he typically displays unparalleled sportsmanship in the second half by playing reserves and doing whatever he can to help the opponent save face. So the value sits with the first half, which is where we can optimize Bama’s superior talent gap on both sides of the ball.

Safe to say this matchup was not in the running to host College GameDay. The two teams combined for one win and looked every bit as bad as their records would indicate. Sadly, I do think Hawai’i is that bad. The Rainbow Warriors somehow covered 6.5 at home last week against Duquesne, which is an FCS school. The Dukes actually dominated the box score and rather outplayed the ‘Bows. I think the Aggies, with veteran coach Jerry Kill, get their first win and cover this number. This line has actually taken sharp action for a reason, moving it up from PK.