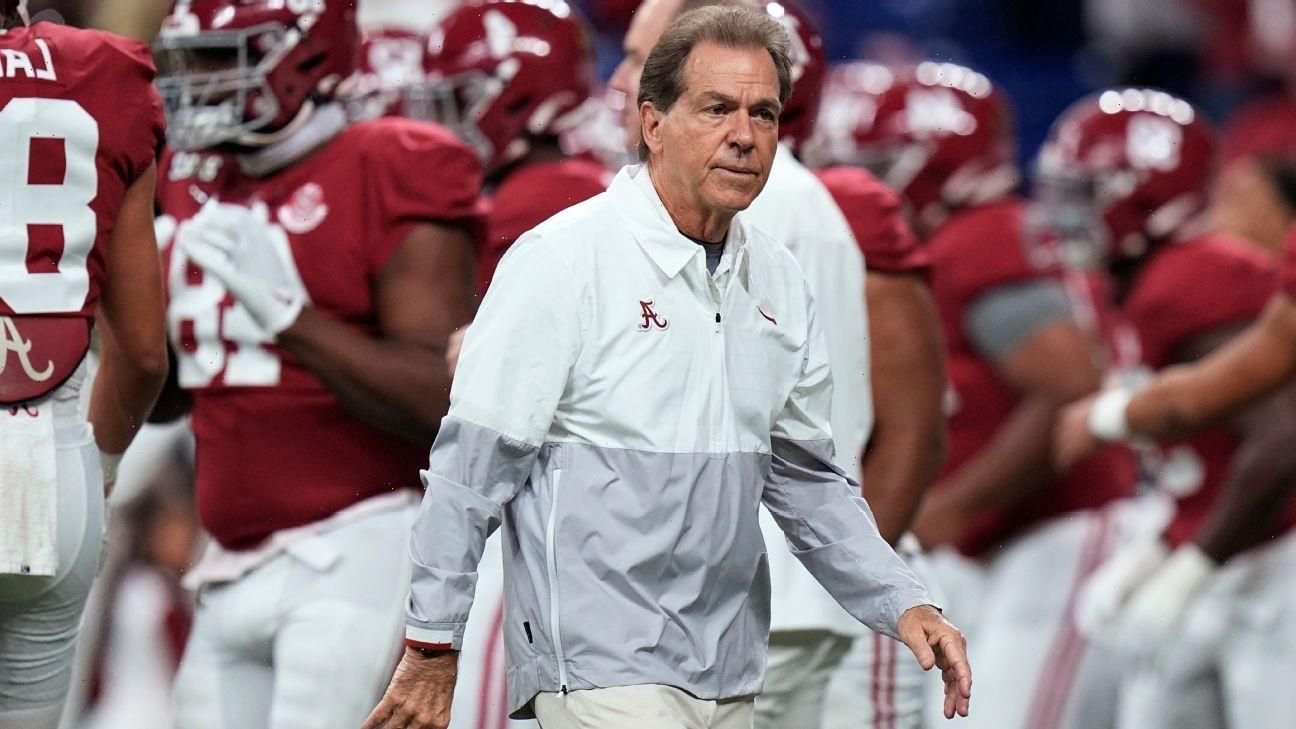 Nick Saban may only stand 5-foot-6 but he intimidates nearly everyone. That includes the betting public, even when they have every reason to fade him.

Bettors without hesitation paraded to the window last weekend to lay 24 points, even though Bama was expected to miss its starting quarterback and reigning Heisman Trophy winner. The Crimson Tide prevented a Texas A&M touchdown on the final play to avoid an outright loss.

Oh how things have changed. No. 3 Alabama (-8.5) visits No. 6 Tennessee with similar QB uncertainty and all of a sudden bettors are no longer afraid to fade. “The public always bets what they last saw,” SuperBook executive director John Murray told ESPN. Currently there’s about a 75% consensus ticket count for UT at all sportsbooks. However, they mostly grabbed a bad number, since the line moved on Friday (-7 to -8) based on growing speculation that Young will return.

It makes sense why Saban is typically backed by the public. Since coming to Alabama, he is 116-90-5 ATS (56%). Plus, against top-10 opponents, he also takes care of business: 26-21-1 ATS. “It’s too late to get rich betting on Saban but you’re definitely not going to get rich betting against him. I’d be careful,” South Point casino sportsbook director Chris Andrews told ESPN.

Alabama is not just getting by on brand name, but it’s also not the same juggernaut we saw under Tua Tagovailoa and Mac Jones. Four of Bryce Young’s six road starts have been decided by three points or less. That includes a Sept. 10 comeback win at Texas with a game-winning field goal in the final seconds.

“There’s something that’s not right with them this year but this also won’t be the same team that sleepwalked against Texas,” SuperBook oddsmaker Ed Salmons told ESPN. “Bama usually thrives when they are being challenged or overlooked.”

Personally, this current stretch of road struggles matter much more to me than Saban’s 15 straight wins over Tennessee. That’s ancient history, since players and coaches turn over. The Brady Hoke and Jeremy Pruitt eras do not matter. Josh Heupel has been gradually resurrecting the program with elite recruits and transfers. This is a breakout season, and the Vols are every bit as legitimate as their undefeated record suggests.

As for the handicap, picking a side is tricky. If Young never got hurt and Bama handled the Aggies comfortably, this line would be double-digits. So that would suggest some current line value on Bama, assuming Young plays. But the star quarterback did get injured and may not be 100%. That’s a legitimate factor.

I am playing over 66. UT owns the nation’s fifth-fastest tempo, and I believe Bama will also want to push the pace on offense. Both coaches believe in their outstanding quarterbacks and are comfortable in high-scoring affairs. And even if a hobbled Young causes the Tide to lean on their running game, they still have plenty of explosiveness.

My one caveat is what a pro bettor told me on Thursday. He firmly believes the Tide will come after Hendon Hooker on nearly every play. I may actually wait a quarter and then make an in-game bet, gauging whether I believe Hooker can survive the pressure. How much can the QB take? We are about to find out how tough he is — and how tough bettors are, fading Saban and Bama as mere single-digit favorites.

At some point, Auburn is going to fold like a cheap suit and barely show up in a blowout loss. With my luck, it’s this game because I am finally backing the Tigers. However, I have been thoroughly impressed with the Tigers lately and am grabbing the points. They have had every reason to fold, given that Bryan Harsin has completely botched the entire situation. But they nearly upset LSU and then trailed No. 2 Georgia 14-3 in the second half in Athens. I love the quarterback switch to Robby Ashford. The freshman always finds a way to make a play.

Plus, the Rebels travel to Death Valley next week to face LSU, and I believe Auburn can catch them looking ahead to that high-profile showdown. I’ll grab the points against an undefeated Ole Miss squad that could be sitting a little too fat and happy right now.

This rationale is similar to Auburn. I believe the Cyclones can sneak up on a team with a huge game next weekend. Texas travels to undefeated Oklahoma State. But it’s going to practically take a flawless game for Iowa State, since it ranks just 78th in offensive efficiency. The Longhorns just got back quarterback Quinn Ewers and they really clicked. However, coming off the rivalry win over Oklahoma and with the Pokes on deck, this could be a classic sandwich spot. I think the Cyclones muck up a wonky game and eek out the cover.

Oddsmakers are forcing bettors to pay a tax in order to cash another CSU fade — and I get it. Honestly, the Rams are horrendous. They rank dead last (131st of 131) in offensive efficiency and have a quarterback that may actually play worse than that ranking would suggest. Brayden Fowler-Nicolosi threw two interceptions and managed only 78 passing yards last week, and the offense was held to just three points. However, the Rams somehow picked up their first win and covered. I think it’s back to their losing way against Utah State, which has found some versatility on offense with QB Cooper Legas.

This game will not find its way to many television sets but that’s why we like grabbing all these points. In short, this number feels way too high. Under Jeff Brohm, the Boilermakers are a team you only want to back in the underdog role. They typically play close games, which is why you never want to lay too many points. Four of their five games against FBS opponents this season have been decided by four points or less, and the other was a 10-point win as a ‘dog. Meanwhile, after firing Scott Frost, the Cornhuskers have quietly gone 2-1 and are tied atop the Big Ten West. A bowl game is not that farfetched.

The NBA season is almost here. Sign up for ESPN Fantasy Basketball today. Play for free

No. 10 Penn State Nittany Lions at No. 5 Michigan Wolverines

I lean to Michigan (-7) to cover over Penn State. James Franklin is a solid coach but tends to squander these opportunities, having lost nine straight against top-10 opponents. My biggest beef with Franklin is situational awareness and game management. The Wolverines rank in the top-15 in both offensive and defensive efficiencies, and I got a feeling too many Penn State drives will end with punts.

No. 8 Oklahoma State Cowboys at No. 13 TCU Horned Frogs

I am not going to overthink this undefeated showdown between Oklahoma State and TCU. This has shootout written all over it, and oddsmakers cannot set the total high enough. I have no issue with taking over 68.5. TCU actually has the nation’s second-ranked offense, while the Pokes rank 24th. Now, both own respectable defenses but it would take numerous field goals and stalled drives to keep this under.

No. 15 NC State Wolfpack at No. 18 Syracuse Orange

Given the uncertain status of QB Devin Leary, making a play on North Carolina State and Syracuse is pretty tough. Leary is an NFL prospect and any drop-off to a backup is significant. If he is confirmed out, I have to side with Syracuse -3. The Orange have been shaky but they’re still undefeated.

No. 16 Mississippi State Bulldogs at No. 22 Kentucky Wildcats

Speaking of quarterback uncertainty, Kentucky (+4) hosts Mississippi State in another head-scratcher. I am grabbing the points, even if Will Levis does not return from injury. I watched UK’s entire loss to South Carolina and only a few plays cost them the game. I think Kaiya Sheron will be more polished and the defense is capable of containing Mike Leach’s Air Raid offense. I say the ‘Cats sneak inside the number.

Oh boy. USC has turned out to be better than most expected and now faces its toughest test at Utah. So far, the Trojans have answered every challenge, and I am not about to pick against them. However, sharp money did back Utah -2.5 when this line opened. I realize the Utes play much better at home, but Cam Rising has made some key mistakes this season. I am on the under 65. The Utes want to run the ball and bleed clock, and USC has offensive line injuries. QB Caleb Williams is dynamic but the Trojans offense will struggle at times in this hostile environment.