That was four years ago. 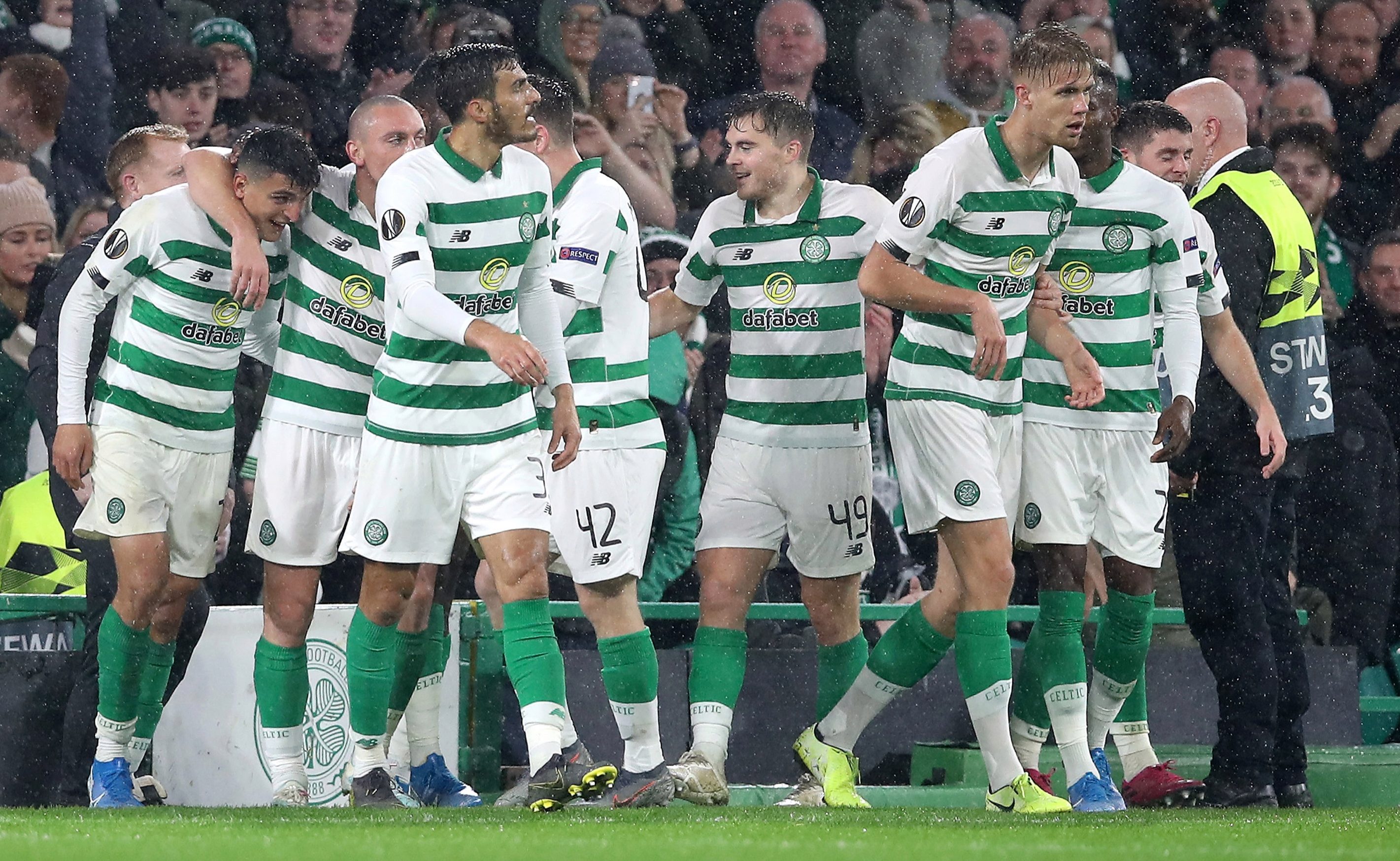 The dazzling loan winger’s second half strike secured a top victory after Odsonne Edouard had put them in front.

Four points from their first two Group E matches is a quality return for the Celts.

Back in 2015 Elyounoussi visited with Molde in the same competition and scored as the unheralded Norwegians humiliated Celtic with a 2-1 win.

The Hoops set out to atone for the Romanians killing their Champions League dream with a markedly different side which lined up that fateful night here on August 13.

This time the £13 million worth of defenders Christopher Jullien and Boli Bolingoli were IN while Scott Bain, Jozo Simunovic, Olivier Ntcham and Mikey Johnston were out.

And Callum McGregor wasn’t at left-back. 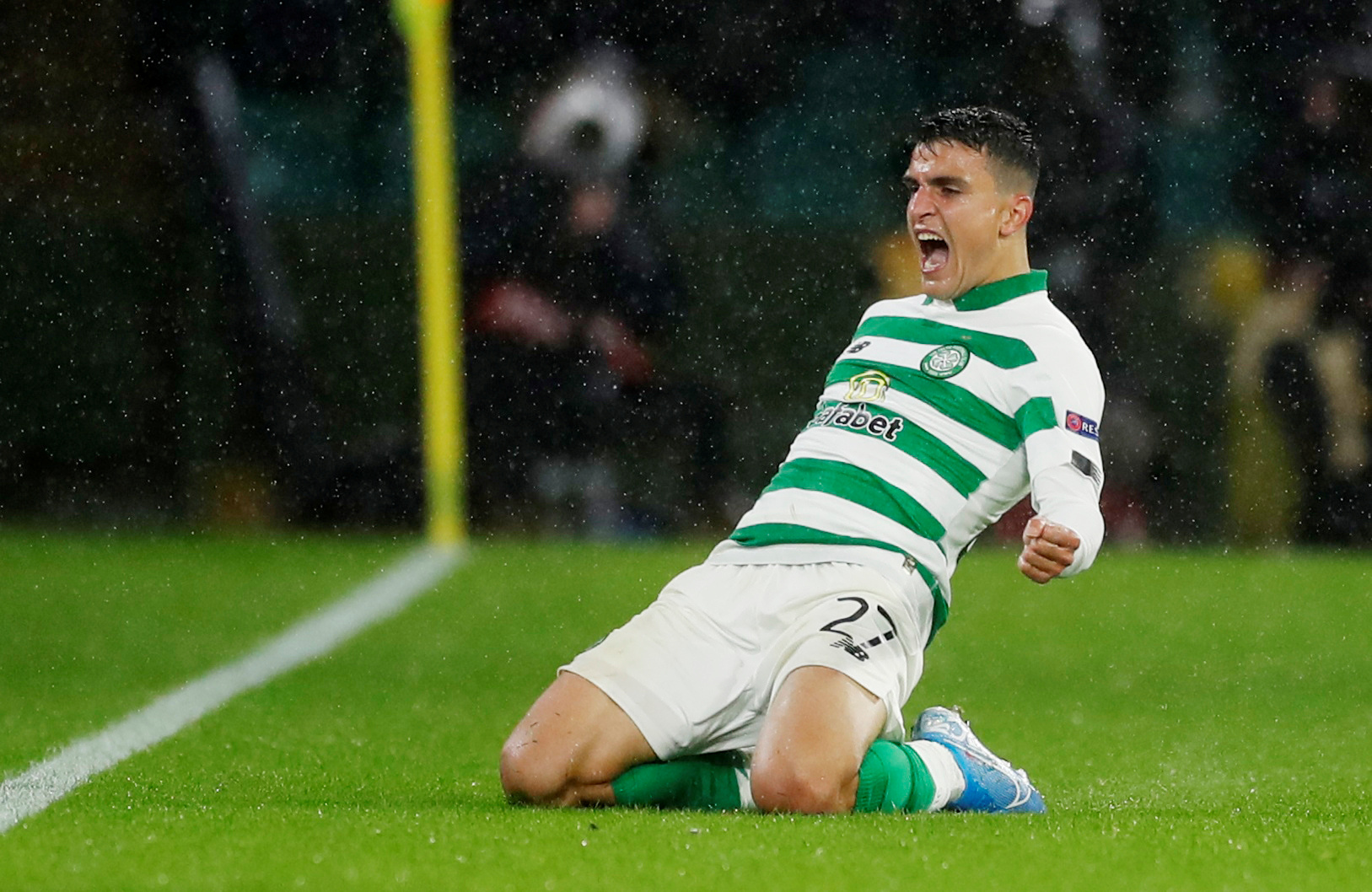 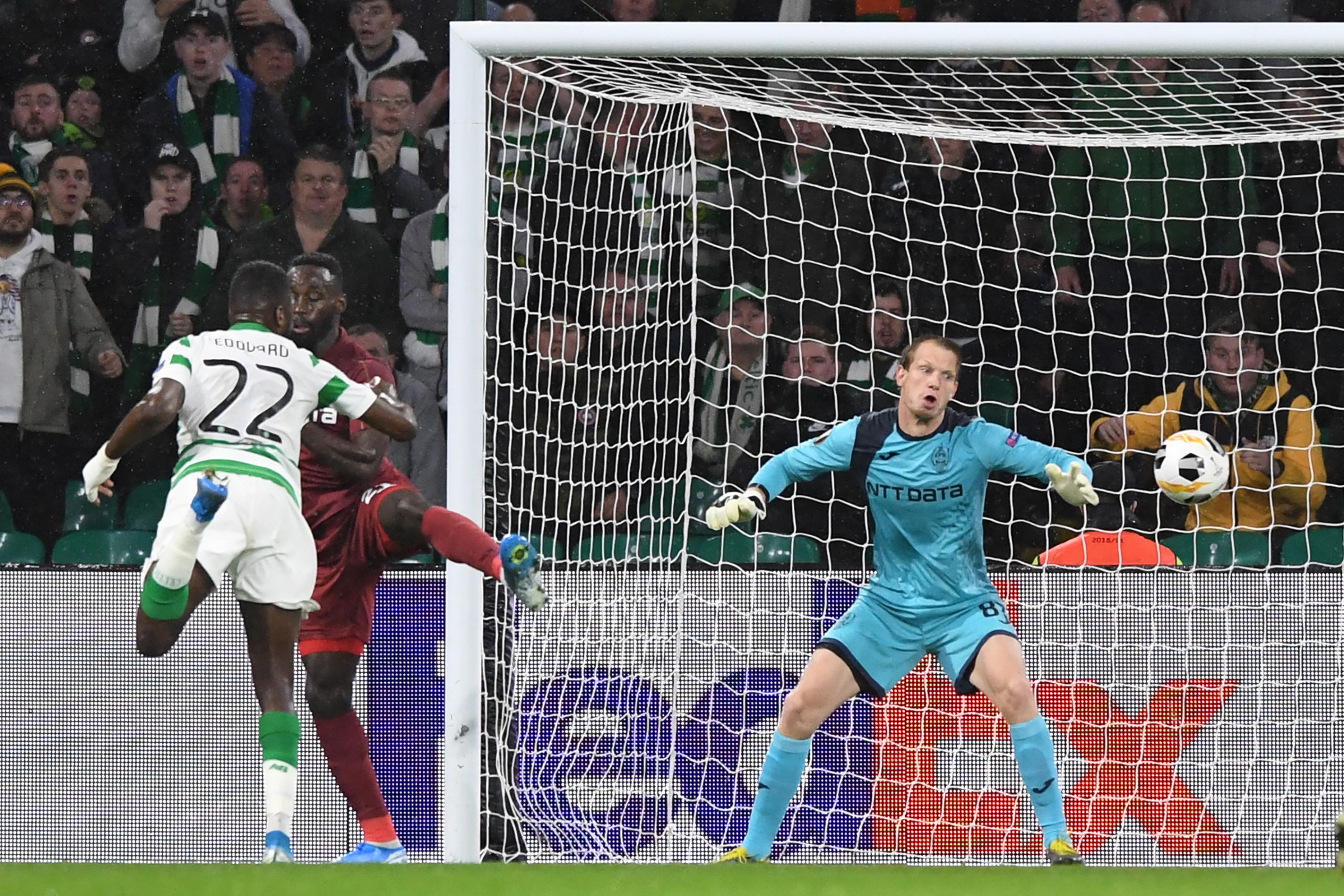 A soaked pitch – with the rain constant – made for an entertaining, slick passing game.

And the Hoops had enough talent in their ranks to appreciate that.

It made for an excellent, refreshingly open Euro tie with Dan Petrescu’s side understandably arriving back in Paradise with belief not fear.

Celtic started brightly – and only an outstanding Giedrius Arlauskis save denied them an 11th minute lead.

From a corner Ryan Christie and James Forrest combined well, McGregor was picked out and he quickly whipped in a great left foot cross which Jullien rose without challenge to meet powerfully with his head.

It was point-blank range but the Cluj No1 showed fabulous reflexes to throw himself to his right to push away.

Seconds later another corner routine saw Christie and Forrest combine once more before Boli Bolingoli took the ball and fired in another great delivery.

And it was Jullien again waiting for it – this time, though, he put his header well over and a good chance had been squandered.

To be fair, the giant French stopper was once again very impressive. 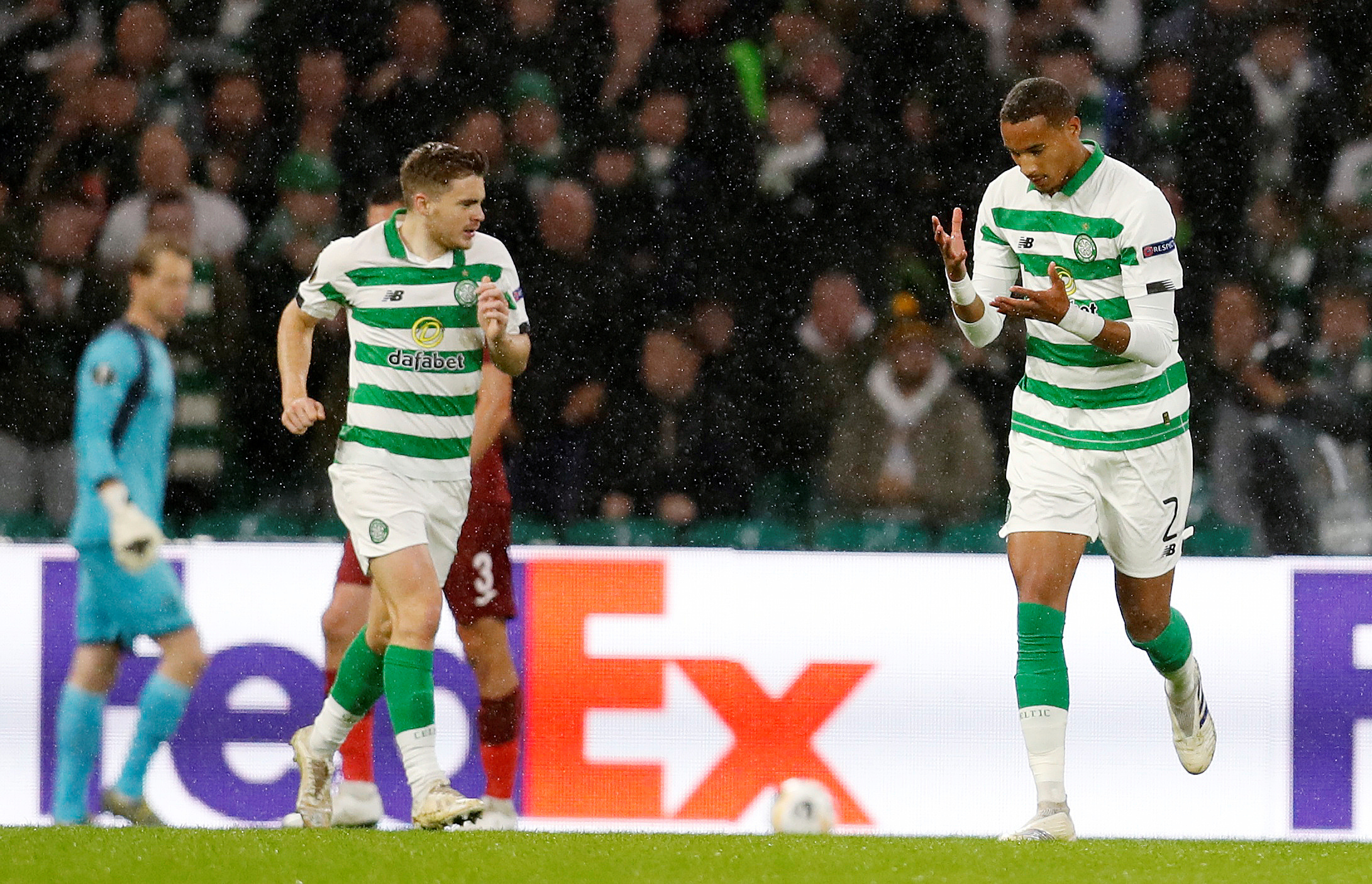 Celtic had Cluj where they wanted them in a lively opening 20 minutes.

A superb Christie reverse pass left Forrest in the clear in the box for a bye-line cut-back. Agonisingly, from his drilled ball there were no takers.

But within seconds Celtic did go ahead.

Bolingoli was branded a joke soon into his Hoops career after a, shall we politely say, haphazard first few games.

But no one was laughing at him at this moment, only applauding him.

The Belgian left-back showed electric pace to race into the box for a precision McGregor pass and then produced the perfect clipped cross – which Edouard met with a terrific glancing header into the far corner.

Parkhead erupted as the French idol celebrated his ninth goal of the season, with four of them in Europe.

Celtic – the defeat to Cluj their only set-back in 18 games before kick-off – deserved it for their brand of sound defensive work and switft attacking play. 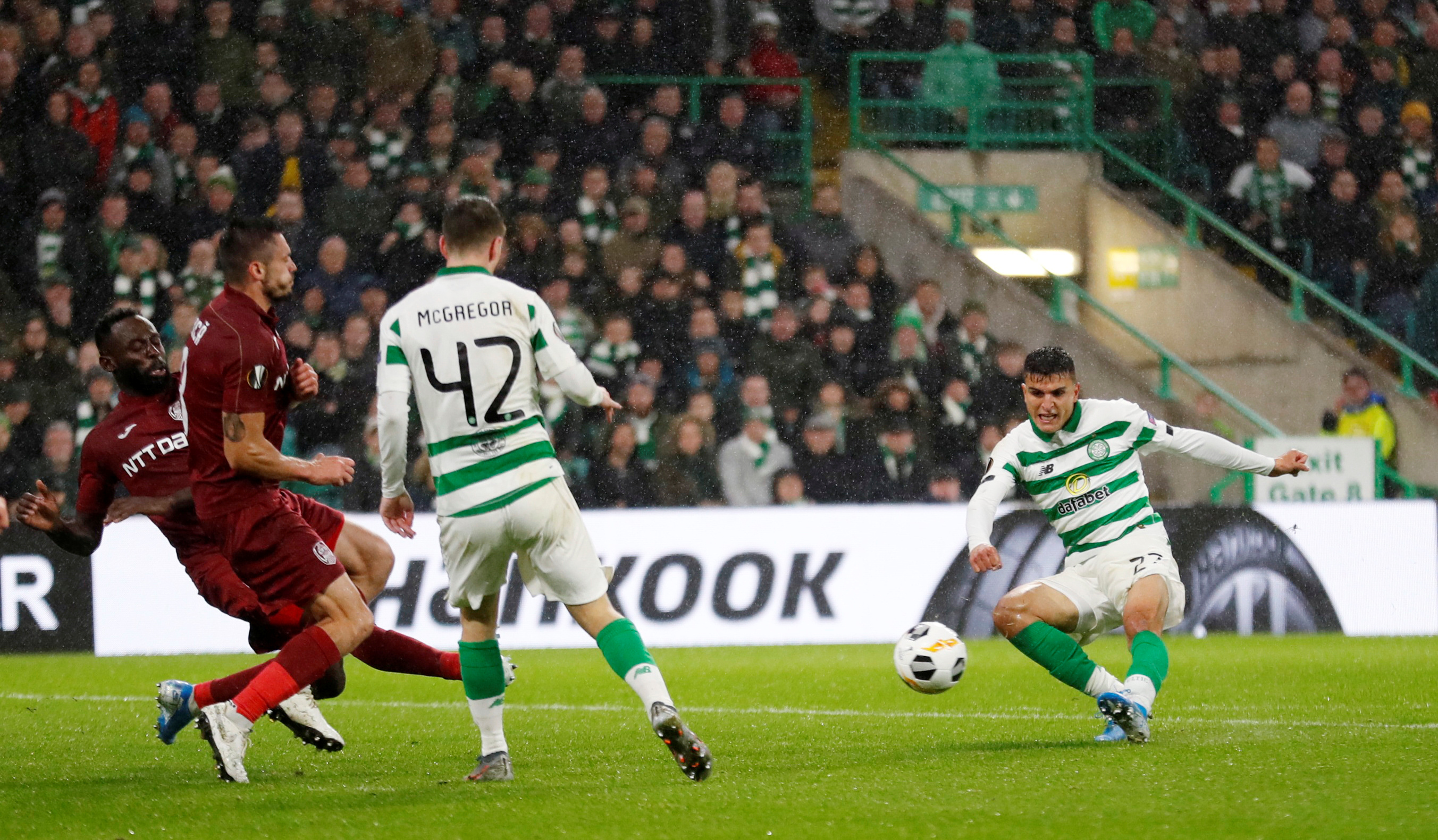 Bolingoli underlined his new-found confidence again in the 23rd minute with a decent shot with the outside of his left foot which wasn’t far over.

Cluj – with a three-pronged attack – hadn’t been shy in breaking up the park but until the 25th minute hadn’t threatened.

Then they got a free-kick 25-yards out following a no-nonsense McGregor tackle on Mihal Bordelanu which got him a booking.

Ciprian Deac – who also scored here in August – fired in a left foot shot which Fraser Forster saw late but got down to push away.

Mario Rondon’s attempted follow up shot ricocheted across the box for Omrani to ram home – but far side assistant linesman Stefan Lupp promptly raised his flag for offside.

A surging Scott Brown run ended with the Celts skipper firing high and wide from 25-yards.

By now, 10 minutes from half time, the game had gone flat.

Celtic were relieved again in the 42nd minute as Rondon went down heavily in the box with Christie beside him.

But ref Daniel Siebert was unimpressed and booked him for diving.

Celtic finished the half strongly, a Bolingoli shot smothered by Arlauskis.

They had been the better side – but they got a Cluj warning two minutes into the second half with Omrani unleashing a left foot volley wide of target.

The visitors always had the capability of breaking fast and if there was one lesson from the August catastrophe it had to be defensive concentration.

Celtic needed a second – and they got it on the hour. 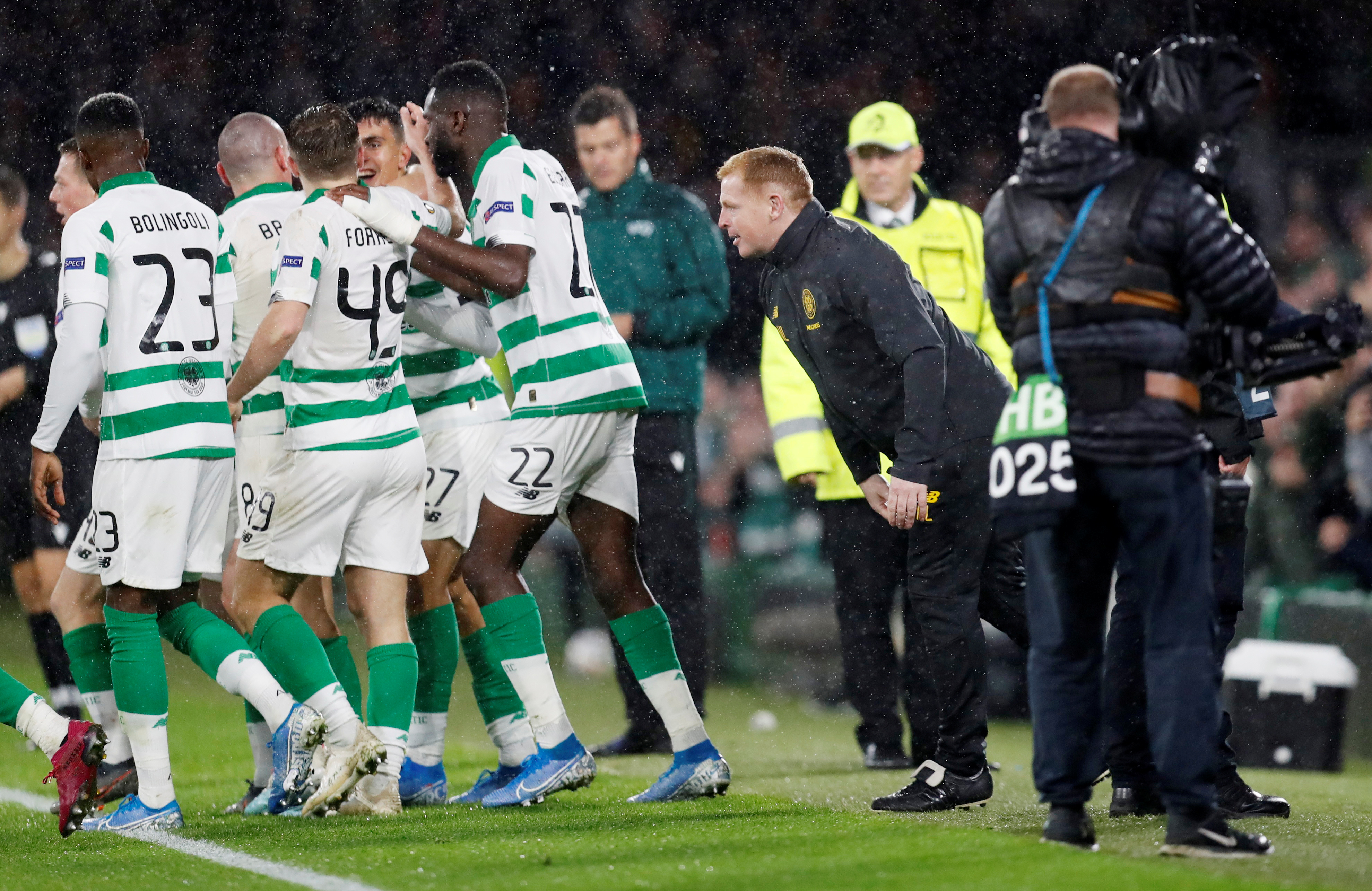 Tremendous work by Elyounoussi deep inside his own half saw him pick up the ball and with a bit of trickery break up the park.

Eventually the Norwegian found Forrest but continued his run. The winger looked up and played the ball back to Elyounouissi at the edge of the box and his left foot shot was deflected beyond Arlauskis.

It was a massive moment for the outcome.

But credit Cluj, they proceeded to pin back the Hoops – and in complete contrast to the last time Lennon’s men were solid, with Jullien immense in the air and on the deck.

Still, it needed a wonderful 64th minute finger-tip from Forster – diving down to his left – to thwart a well hit, angled strike in the box from Deac.

It was an end to end game, great value, and Celtic pursued a third going into the closing stages with the peace of mind Jullien and co had everything sorted at the back.

Elyounoussi’s energy was eye-catching and his runs down the left and cutting inside ensured Cluj had plenty to think about.

A jinking Christie run in the 81st minute ended with a shot screwed wide of the far post.

Cluj, to be fair, were spirited.

But it was Celtic’s night. This time it was the Romanian’s getting the message.