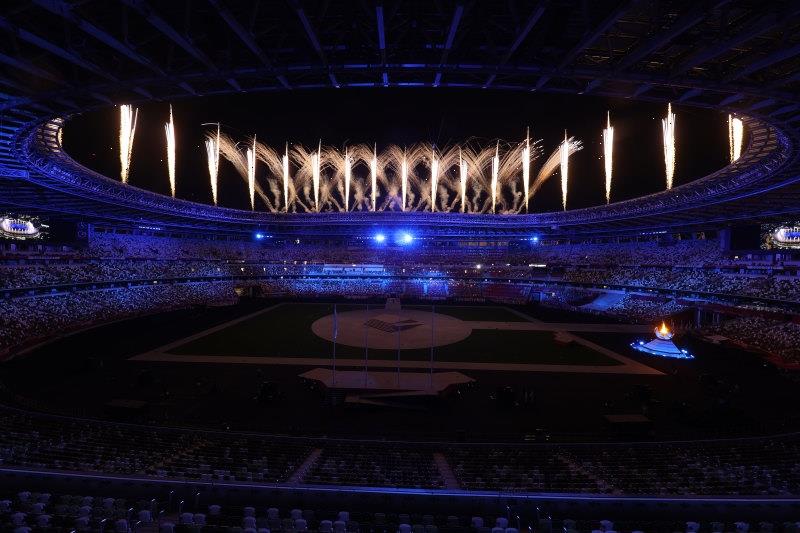 By Lia Timson and Eryk Bagshaw 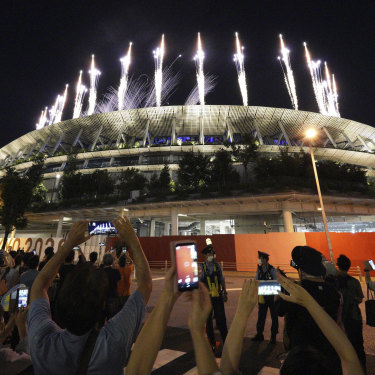 People gather outside the Tokyo National Stadium to participate in the Games closing ceremony from anyway they could, given spectators were not allowed in due to the pandemic.Credit:AP

The closing ceremony of the 2020 Summer Olympics, officially the XXXII Olympiad held in Tokyo in 2021, took place on Sunday evening.

The show started with a short video celebrating the past 17 days and fireworks to mark the beginning of the end. 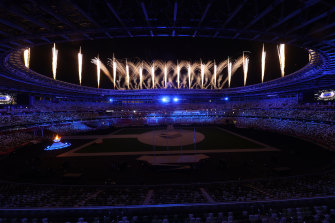 Fireworks are seen during the closing ceremony of the Tokyo 2020 Olympic Games.Credit:Getty Images

After the Japanese national anthem was sung by a troupe with a 100-year history and the flag entered the stadium, it was over to the athletes’ parade with flag bearers from each country parading and forming a circle. Then remaining athletes entering all at once from four gates. Organisers wanted this part of the ceremony to be “celebratory and liberating”.

This also sped up the athletes’ parade and allowed them to mingle, a freedom afforded by constant COVID testing before and during the games. 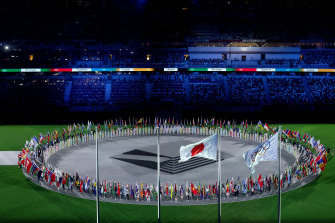 A view as the flag bearers of the competing nations enter the stadium during the closing ceremony.Credit:Getty Images

There were noticeably fewer athletes and officials at this closing, with many having left Japan within 48 hours of their last event, in accordance with COVID regulations. 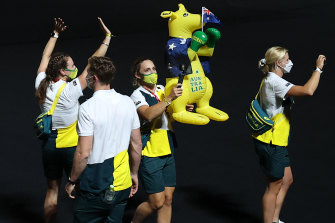 Mascot time! Members of the Australian team during the closing ceremony of the Tokyo 2020 Olympic Games.Credit:Getty Images

Then it was over to the Olympic rings display. As “a symbol of individual passion, dedication, hopes and dreams”, there were shining points of light on the field, emanating from the seats representing the public who, had them been allowed, would likely have turned on their smartphone flashlights. The lights then formed the five Olympic rings in the sky.

Next the stadium was transformed into a big park with grass carted in for a segmented titled “All Tokyoites”. Organisers wanted this to be a moment when athletes could kick back and relax, “just like a Sunday afternoon at a park in Tokyo”. It went for nearly 14 minutes and featured performances from singers, dancers, BMX riders and skateboarders to the tune of several songs from the Call from Rio by Tokyo Ska Paradise Orchestra to Beethoven’s Ode to Joy. 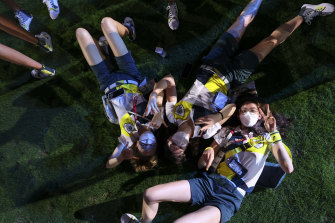 Athletes enjoying Sunday at “a Tokyo park”, just as planned by organisers.Credit:Getty Images

Then came the Gratitude moment – to the athletes and the staff who helped make the Games and the ceremony happen. This started with the Greek national anthem and Greek flag – Greece being the birthplace of the modern Olympics – and continued with medal ceremonies for the men’s and women’s marathon medallists.

The first honours went to Kenyan Peres Jepchirchir, the winner of the women’s marathon held on Saturday, fellow countrywoman Brigid Kosgei and American Molly Seidel, the silver and bronze medallists. 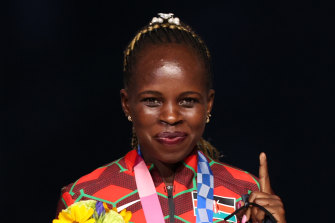 Gold medallist Peres Jepchirchir of Kenya at the medal ceremony during the closing of the Tokyo Games.Credit:Getty Images

Then Eliud Kipchoge of Kenya, who won the men’s marathon earlier in the day in Sapporo more than 800 kilometres away, along with silver and bronze winners Abdi Nageeye and Bashir Abdi, from the Netherlands and Belgium respectively, were presented with their medals. These medal presentations were meant to represent the victory of all athletes at the Games. 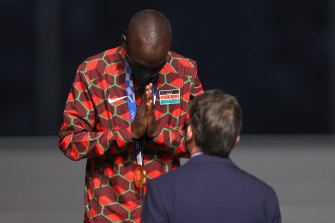 Eliud Kipchoge of Kenya thanks the IOC official who presented him the gold medal.Credit:Getty Images

The next stage of the show aimed at celebrating traditional festivals and dances from all around Japan under the title We Remember. These have been passed down from generation to generation, organisers said.

It also included a moment of remembrance to allow athletes to mourn all those who have passed away. 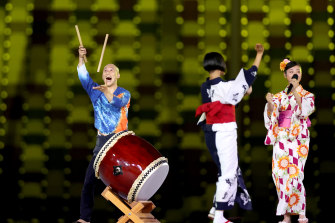 Entertainers perform a traditional song at the closing ceremony of the Tokyo Games.Credit:Getty Images

In one of the last official acts of the closing ceremony, the Olympic flag was lowered and handed over by Tokyo Governor Yuriko Koike to the president of the IOC, Thomas Bach, to the mayor of the next host city, Paris, Anne Hidalgo.

An eight-minute performance arranged by the Paris organisers followed. It was designed as “an invitation to the youth of the world to attend the next Games”. It included a video of performances of La Marseillaise – the French national anthem – and a guest appearance by French astronaut Thomas Pesquet on saxophone from the International Space Station. 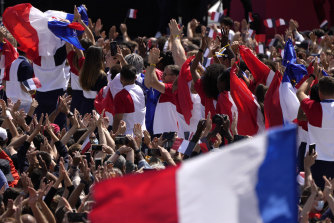 Fans wave French flags and cheer in the Olympics fan zone at Trocadero Gardens in front of the Eiffel Tower in Paris on Sunday.Credit:AP

French people were already enjoying freedom from lockdown in Paris, with thousands gathered by the Eiffel Tower to watch the closing ceremony and witness an early record of sorts. Live from the French capital, the Paris 2024 committee says it flew the world’s largest flag, almost the size of a football field, using the Eiffel Tower as the flag pole, with France’s elite air display team performing acrobatics, making blue-white-red ribbons overhead and President Emmanuel Macron delivering the updated Olympic motto: “Faster, Higher, Stronger, Together” from the top of the tower. 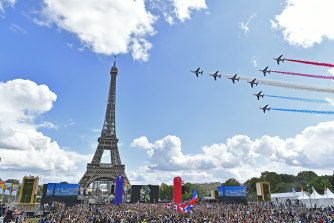 The elite aerial acrobatic team, Patrouille de France, perform behind the Eiffel Tower in Paris on Sunday to celebrate the handover of the Olympic flag to the city that will host the 2024 Games.Credit:Getty Images

After the obligatory speeches, the Olympic flame was extinguished and, for the first time during a closing ceremony, a preview of the Paralympic Games was played on video to the theme song of the Netflix documentary Rising Phoenix. Followed by fireworks and the word ARIGATO displayed on screens around the stadium.

“For the first time since the pandemic began, the world came together,” he said. “The Japanese people can be extremely proud of what you have achieved.” 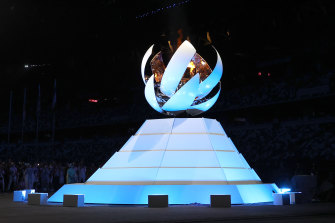 The cauldron closes, extinguishing the Olympic flame, as the Tokyo Games came to an end on Sunday.Credit:Getty Images

The theme for the closing ceremony was “Worlds we share” and organisers had promised to leave us with “food for thought about diversity and inclusion as we continue to the Paralympic Games”.

It was designed to not only celebrate the efforts of the athletes in the first 17 days of Games, but also “carry over the excitement and exhilaration” to the Paralympics, which start on August 24.

“We want these ceremonies to be a series of moments that give each and every one of us the strength to look towards the future, and that also serve as opportunities to create a better normal together,” they said.

Did they achieve it? You be the judge. 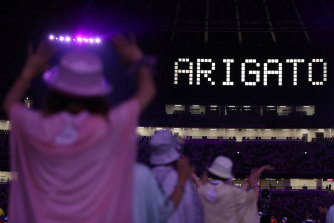 Thank you, Japan: The word arigato is displayed in the Olympic Stadium as the organisers thanked the Japanese people and the teams for a Games like no other.Credit:Getty Images