Fox NFL analyst Chris Spielman on what he expects from the return of the NFL.

Cam Newton on Monday addressed his relationship with New England Patriots coach Bill Belichick and how his perception of the legendary leader changed upon joining the organization in the offseason.

Newton signed with the Patriots after being released by the Carolina Panthers earlier in the year. Newton had won the MVP and led the team to the Super Bowl during his tenure in Charlotte but was released after missing most of the season with injuries.

He told WEEI radio’s “The Greg Hill Show” he didn’t know what to expect when he joined New England.

“The same questions that a lot of people, and talk shows, gossip talk, and barber-shop talk, and chitter-chatter text messages wanted to know, I wanted to know as well,” he said. “Is it real, what they say about Belichick? Is it going to be too … I didn't know. I think, honestly, it's been a match made in heaven for me, just knowing that I'm at a place where everything is pulling in the same direction and everything is geared toward winning."

Newton continued: “Coming from a person that has won at all levels, I feel as if I do the things the right way, trusting a lot of the same people that got me to this point, and trusting coaching, I think this is something that when you look at an opportunity in a timely manner it can be accomplished.”

He said meeting Belichick face-to-face removed “any type of doubt” he had about playing for the six-time Super Bowl-winning head coach. He said concerns about joining the Patriots may have risen because he is a Black athlete.

BILL BELICHICK ON PATRIOTS QUARTERBACK CAM NEWTON: 'NOBODY WORKS HARDER THAN CAM DOES' 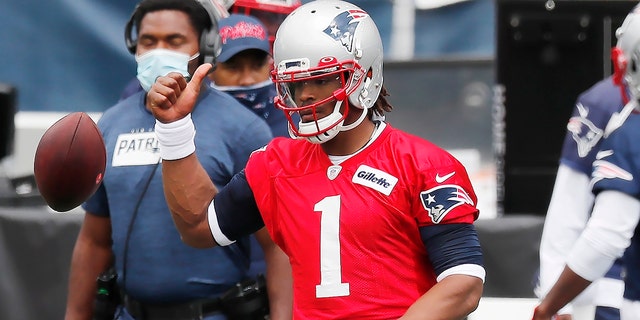 “We're going honest? It is because I'm a Black athlete, a quarterback that for a long time, I've been unapologetic; carried myself in a way that the media hasn't gave me my just due. But yet at the same time, I do understand that and I don't have no type of resentment toward that. I embrace who I am, I embrace the moment. I live in the moment. One of the quotes I live by is 'carpe diem.’

“Throughout it all, I've been able to see an opportunity. I went down a list of things I expect from Bill Belichick, just like Bill Belichick wants a list of things he wants out of Cam Newton. I think the narrative coming here was kind of stereotypical to an unjust eye; 'We heard this about Cam. We heard that. He's a prima donna. He's this and that.' But when you really put a microscope to who I really am, there is a lot of favoritism that has not been favorable for my benefit.

“But through it all, I'm not going to make this about me. I want to make this about this team and how to gain these guys' trust. I think that's the biggest thing, the biggest challenge I have doing, is letting these guys understand, 'Listen, I know there's been a lot said, I can feel the eyes and the attention that's on me as soon as I walk inside the facility, but at the end of the day, you guys got to know a lot of that is BS, and I'm here to remove all doubts.’”

Newton was reportedly named the starting quarterback for Week 1 and one of the team’s captains for the 2020 season.