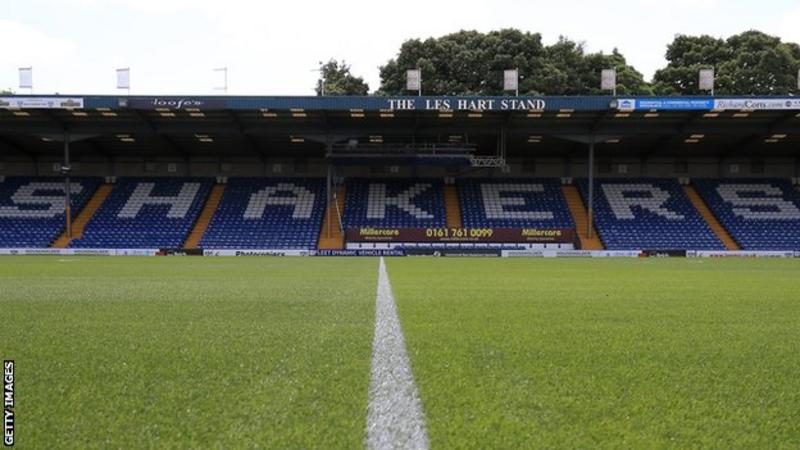 Bury’s match against Tranmere Rovers on Saturday has become the Shakers’ sixth game to be suspended, while Steve Dale has rejected an offer to buy the club.

Bury, who could be expelled from the English Football League on Friday, have also been removed from the Carabao Cup.

The EFL has said it is “frustrated at the lack of progress” made as it seeks evidence that Bury can pay creditors and have funding for the season ahead.

Owner Dale is believed to have refused an offer made by a former chairman.

It is understood the offer would have secured the survival of the League One outfit, with the ex-chairman told that Dale believes he can get a better offer.

The EFL have also confirmed that if Bury are expelled, the League One season will be completed with 23 teams, with the number of relegation places reduced to three.

It added that it remains in “regular communication” with Dale but that “if a solution is not found by the deadline, the board will authorise the necessary share transfer on behalf of Bury FC which shall be legally binding on all parties and result, regretfully, in the club no longer being a member of the League”.

If Bury are removed from the league, the EFL says the club “would then be free to make an application to the Football Association to rejoin league competition further down the English football pyramid from season 2020-21”.

Bury staff issued a statement on 12 August which “implored” Dale to accept an offer for the club, who are yet to play a competitive fixture this season.

They have had five successive League One fixtures suspended, while their withdrawal from the Carabao Cup means Sheffield Wednesday have received a bye to the second round, when they will play Rotherham United.

The 134-year-old Shakers have already been given a 12-point deduction for the season after entering into a company voluntary arrangement (CVA) – which is classed as an insolvency event by the EFL – to try to clear some of their debts.

Bury saw a winding-up petition against them dismissed by the High Court on 31 July, while Dale claimed the EFL was “working against” them.