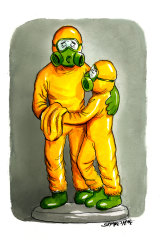 How to navigate the world of sport in the age of coronavirus? I am frankly not sure if, when it comes to the world of serious contact sport, it is navigable.

Yes, at the time of going to press the NRL is on this weekend, as is the Super Rugby, as are the NBL finals. But how long can it be before what happened in the NBA and the NHL in North America – where no sooner has a player tested positive than it is shut down – happens in these sports, too?

And I don’t just mean professional sports. In a situation that is developing and deteriorating by the day, even by the hour, it is impossible to predict what the world of sport will look like a week from now, let alone longer term.

But I would say that if, as I suspect, we are about to head through a sustained period of contact sport being shut down, the best chance of big-time sport going on will be through the likes of golf and tennis, perhaps to empty fairways and stadiums.

The challenge for all of the professional leagues will be to stay intact, with players and TV contracts still in place, while paying all their own bills, until we can all get through to the other side of this nightmare.

Stand by, sports fans: this is going to get ugly. 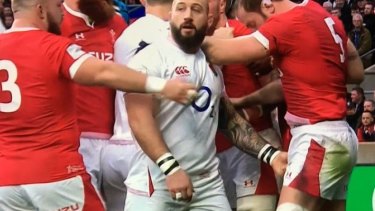 The TV cameras did not miss it, however, and it was an obvious subject for discussion for the ITV panel at half-time, a panel that included the former Wales and Lions captain Gareth Thomas who, five years ago, became rugby union’s first openly gay superstar before retiring.

There were a couple of stunned looks, then an explosion of laughter. Just about everyone took it in the manner it was intended, as a joke – specifically, a gay man making a joke at his own expense. Some people, however, were so infuriated, so outraged that he should be making light of “sexual assault” etc that Thomas felt obliged to follow up with a tweet.

“To the VERY small minority of people who were offended by my comment yesterday I apologise. I tried to find humour in a situation – that doesn’t mean I condone it, it means I wanted it to not be an issue. So don’t change the narrative to justify how you feel. Be kind.”

Who let the Dogs out

What would a rugby league season be without a pre-season scandal? Most interestingly, this off-season was pretty quiet compared to the last one, perhaps because of the new NRL “no fault" stand-down rules, but just when you thought it was safe to let the dogs out, here they are . . .

The Bulldogs! At Port Macquarie in February.

By now most people know the story of the two Bulldogs, who visited a Coffs high school on a promotional visit before playing a trial match the next day, made contact with some of the female students and, later that night, after connecting up on social media, did the business. 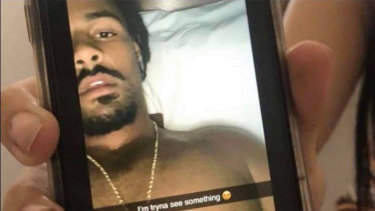 The future of Jayden Okunbor looks to be all but over after a series of snapchat images of the Bulldogs winger seemingly asking a 16-year-old schoolgirl for intimate images has emerged.

My friend, Professor Catharine Lumby, the long-time NRL gender adviser, has made the point that, as the students were not underage and there is no suggestion it was anything other than consensual, this should not be referred to as a “sex scandal", and little anguish should be directed to the students as it is their own damn business as to whether they are sexually active or not, and with whom.

Her broad theme is that moral outrage is out of place, and it is only a work-place issue as to whether or not they breached regulations in their contract about how to comport themselves when with the team.

We needn’t judge the girls, fair enough, but is it OK to judge the players, Cathy?

I accept Lumby’s point that the young women are free to do as they damn well please without judgment on them. But 25-year-old professional football players going after 16 year-old schoolgirls they have met that day still feels like a highly troubling power imbalance. We needn’t judge the girls, fair enough, but is it OK to judge the players, Cathy?

Beyond that, players who are so bone-stupid as to do what they did are never going to be the players you build a premiership-winning team on in the first place. As mentioned in my column this week, the 1987 Rugby World Cup coach, Sir Brian Lochore, once said “better All Blacks make better men".

Lochore picked men of character in the first place, and established a culture to develop those characters. Faced with players in their mid-20s shtooping sixteen-year-olds, their feet would not touch the ground before they were out the door: “There is a bus leaving in five minutes, be under it.”

When TFF made the point of how wonderful it was that little girls in Australia could look to the example of the Australian women’s cricket team triumphing in the T20 World Cup and be more inspired than ever at the diversity of options open to them in the world of big-time sport beyond cheerleading for the men, Liz was quick with her reply: “It's also little boys looking at women playing sport and normalising it, and I think that’s super important.”

But it was the stat she offered in follow-up that was the killer, in response to the news that nigh on 90,000 fans were due to turn up to the MCG to watch the final against India. 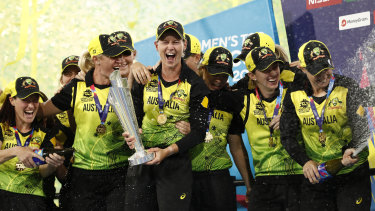 The Australian team celebrate their win over India on Sunday night.Credit:Getty Images

Rooster Jake Friend on replacing high fives and handshakes as a method of preventing the spread of coronavirus: “We fist bump and then we go and wrestle each other all sweaty after that.”

Lewis Hamilton, former Formula One world champion, on Thursday, about the Melbourne GP: “I am really very, very surprised that we’re here. I think it’s great that we have races but for me it’s shocking that we’re all sitting in this room. So many fans already today. It seems like the rest of the world is reacting probably a little bit late yet Formula One continues to go on.” By Friday it was called off. 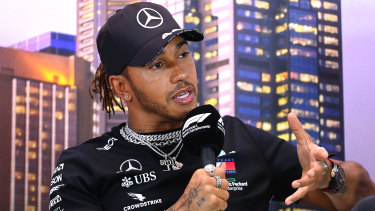 NBA statement as they shut down the entire competition on Thursday: “The NBA will use this hiatus to determine next steps for moving forward in regard to the coronavirus pandemic.” The National Hockey League followed suit the next day.

LeBron James didn’t want to play in front of empty stadiums: “Play games without the fans? No, simple answer. I ain't playing if we haven't got the fans in the crowd, that's who I play for. I play for my team-mates, I play for the fans, that's what it's all about. If I show up to an arena and there are no fans in there, I ain't playing.” LeBron? You ain’t playing anyway. At all.

Billie Jean King ahead of the T20 World Cup final: “I was trying to get people to respect people more, and to respect themselves. Men, woman, now all genders. I just want people to help each other make the world a better place.”

Herald Sun head of sport Matt Kitchin on his paper’s website turning off comments for AFLW articles: “The least offensive of the comments runs to the tune of ‘get back in the kitchen’ and the worst cannot be repeated they are so objectionable. Players, commentators, fans and clubs have all appealed to the Herald Sun to shut off the comments. And we've heard them.”

Alyssa Healy after the Women’s T20 final: “That was unbelievable, thank you everyone. I never thought we'd get an opportunity like this my whole career. It was something really special.” 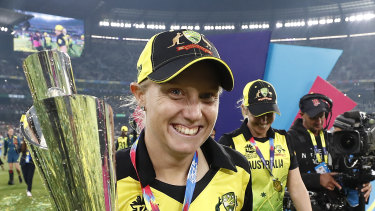 After the loss of the Third Ashes Test at Headingley, courtesy of Ben Stokes innings-for-the ages, Australian captain Tim Paine addressed his players: “I just want to say, f— that’s going to f—ing hurt a lot, no doubt, for the next couple of days. However, as I said to a few of you boys out there, we’ve still got two Test matches. So let this f—ing thing sting.” The call-to-arms was revealed in doco The Test: A New Era for Australia’s Team.

Andrew Bogut on the anthem/flag to The Oz: “We can piss off the Union Jack, for starters. Tweaking a few lines of the anthem? I have no issue with that . . . What I'm all for is a new flag. Having an indigenous component to our flag part is important, in my eyes. I'd definitely support that. Our history before the First Fleet should be celebrated.” Changing that would be a step in the right direction.

Tokyo Olympics minister Seiko Hashimoto: “With the star athletes in the middle of preparations for this event which happens only once every four years, a cancellation or delay to the Tokyo games is inconceivable. A delay is not under consideration.” I strongly suspect it will either be called off within a week or only go ahead with no crowds.

Bulldogs player Jayden Okunbor to a 16-year-old Port Macquarie schoolgirl: “What are we doing tonight?” These will likely be the five words that were the beginning of the end of his career.

Simone Higgins, wife of John, on the former Rooster suing the league for brain damage he alleges came from repeated concussions:“I mean it when I say I love John, but I’m grieving the loss of the life that I thought we were going to have together. I wouldn’t be anywhere but to look after him. But in one way I feel we’ve been robbed of what we should be doing at our age. John pretty much has to have a full-time carer. He’s 62 years of age and can’t be left at home alone for any length of time.”

Team of the Week

The Australian Women’s T20 team An amazing crowd of 86,174 came to watch the final against India at the MCG to see them crowned as world champions.

Aron Baynes Scored the most points by an Australian in a single NBA game with 37 – including nine three-pointers!

Waratahs Season on the line against Brumbies tomorrow.

Brother Bob Wallace The force behind the Australian Schools Rugby Luncheon for many years is in hospital awaiting a heart operation. The next lunch is Friday, March 27, at the Four Seasons hotel. Google and go-go. And in the meantime, get well soon, Brother Bob.