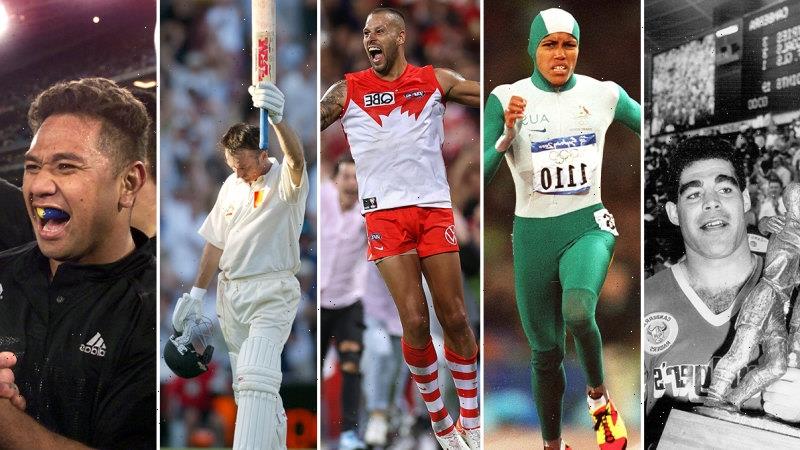 Whoever thought, thirty, twenty and even ten years ago we would see the day where a Sydney crowd would react like that – 25,000 people storming on to the mighty SCG to acclaim their hero? The joy. The exultation. The sheer overwhelming hugeness of the whole moment!

Certainly not this little black duck. In terms of being a critic of the extravagance and unwiseness of original deal to bring Franklin to Sydney, I will get no argument from anyone that I was first and foremost. And, as I have noted in this spot and on the airwaves long yonks back, I obviously got it wrong. Great!

He has my complete and sincere apologies. True, the Swans are yet to win a premiership on his watch, a little down on the initial projections of three premierships while he was here, but there looks to be a real chance they, and he, might do it this year.

Was Franklin’s goal, and most particularly the response to it, the finest Sydney sporting moment of modern times? No. But very bloody close. After deep consideration, and consulting several good judges, I reckon the list of the Top Seven Sydney Sporting Moments goes like this. 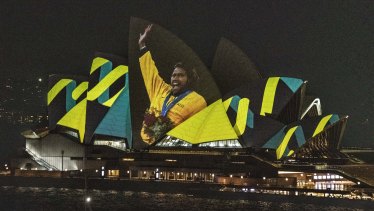 Cathy Freeman won the gold medal in the 400m race in the Sydney Olympics.Credit:Wolter Peeters

No. 1. Cathy Freeman winning the gold medal at the Sydney 2000 Olympics. It is rare in sporting moments that, with a huge buildup, the moment itself actually delivers. This delivered as never before. On the world stage, in front of 110,000 spectators, Freeman hit the straight a little behind – cue Bruce McAvaney, “She’s got a lot of work to do!” – and then reels them in over the next 100 metres as the entire nation jumped to its feet and roared! It is hard to imagine anything or anybody ever outdoing it. An Indigenous woman, at a time when Australia was just awakening to the horror of black history in this country, strutting the world stage with such aplomb, and winning with such grace. It transcended sport.

No.2. Antonio Samaranch uttering those words, “And the winner is Syder-ney.” That’s another one I got wrong, thanks for caring. I never thought that we would either get it or be excited when we did. But I was wonderfully wrong and that announcement on 23 September 1993 will live long in the memory of this town.

No. 3. When John Aloisi nailed the winning goal in the penalty shoot-out against Uruguay at the Olympic Stadium to qualify the Socceroos for the 2006 World Cup, it put Australia in that competition for the first time since 1974. In a stadium reduced in capacity since the days of the Olympics, there were about 82K there that night, but, to this day, 246 K who claim to have been!

No.4. Buddy Franklin’s 1000th goal. It wasn’t just the goal itself. It was the reaction to it. When we were kids, of course, we jumped the fence at great sporting venues at the close of play. But we pretty much haven’t been allowed to do anything of the kind for three or four decades. On Saturday night, Sydney neither cared that they weren’t allowed, nor that they were now fully grown adults. They jumped in their thousands to flood the Franklin, and it was well over 20 minutes before the game could resume. The whole thing was just so joyous and good-hearted, the vision so strong, it really was a great stand-out moment.

Up in the ABC commentary box, England’s Jonathan Agnew and Australia’s Kerry O’Keefe are doing the honours, their words being beamed right around Australia and the United Kingdom.

Agnew: “Well, what high drama we have here, Kerry. What will he do?”

Agnew: “But he could come back tomorrow and wait for a trundler down the leg side …”

O’Keefe: “Stuff tomorrow, Aggers. Tomorrow is for silver medallists. We’re Australians. Poms come back tomorrow. Australians only want the gold and we want it now … He’ll go for it.”

Two seconds later, the English offie Richard Dawson dances in, flights his spinning orb towards Waugh … pitching just outside the off-stump … while the crowd hangs in suspended animation … as it lands and snarls up … as Waugh moves … on to his back foot … and CRACKS it … straightintothefence!

No.6. Steve Jackson’s try in the 1989 rugby league grand final between the Raiders and the Tigers. I have written about it many times. I was there! It is in extra time. The game teeters in the balance. And now look!

Receiving a pass from Mal Meninga, it’s the most unheard-of footballer we’d never heard of, Steve Jackson! No. 20 on his back, a 23-year-old reserve who has just come off the bench.

He’s got the ball, 25 metres out! He shimmies! He shakes! He bumps off one of the Tigers! Two of the Tigers! THREE of them. He twirls, somehow, without really slowing down … even as three Tigers close in on him.

They nail him just before the line, hitting him as one. But that bastard is still going!

He reaches out his right hand, and plonks it down for the biscuits, the 1989 premiership!

Still the most stunning and exciting try I’ve ever seen – the incarnation of the try of our dreams, the one we imagined as kids we might one day score, but never did. 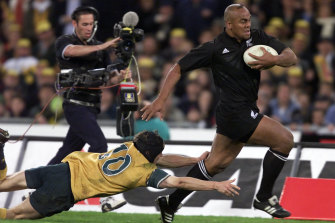 No.7. The Bledisloe Cup match at the Olympic Stadium in the year 2000. If there has been a better rugby Test Match ever played, I haven’t seen it. After eight minutes, the Wallabies were down three tries and 24-0! Doom. Gloom. BOOM!

The Wallabies just scored in reply. They are coming back! Before our very eyes the Wallabies stopped crumbling like a Sao in a blender, and came out swinging. With three minutes left of extra time, Jeremy Paul barged over to make 35-34 to the goodies. Wild celebrations abound all around. They done it.

With nothing left on the clock, the ball goes out to the All Black extremities to . . .

The great Jonah Lomu goes over in the south-eastern corner, for a fabulous All Black victory. It was rugby, as good as it can be played, one to warm the cockles of the soul thirty years from now. I was there, did I mention?

And 80 years from now, Good Lord willing and the creeks don’t rise, a very old woman will be boasting she was there the night that Buddy kicked his 1000th!

News, results and expert analysis from the weekend of sport sent every Monday. Sign up for our Sport newsletter.