The sky is no longer falling in Milwaukee. Three-pointers, on the other hand, those fell one after another for the Milwaukee Bucks on Tuesday night at Fiserv Forum.

Two days removed from getting punched in the mouth by the Boston Celtics in a 22-point, Game 1 loss, the Bucks responded with a haymaker of their own.

Buoyed by 20 three-pointers – a franchise playoff record – and suffocating defense, Milwaukee evened their second-round NBA playoff series in dominant fashion with a 123-102 victory in front of a sellout crowd that went wild as the margin reached as many as 30 points.

Khris Middleton caught fire early, making five of his seven three-pointers – on 10 total attempts – before halftime. Eleven of his 28 points came in the second quarter alone to help the Bucks take a four-point lead into the break. 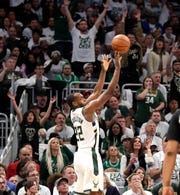 The barrage wasn't something that caught by surprise, yet they were powerless to stop Middleton as he buried a mix a pull-up three's and triples off the catch, particularly in the corner.

After a couple more treys in the first five minutes of the third quarter, Middleton passed the torch to fellow all-star Giannis Antetokounmpo. With just over seven minutes left, the Bucks were clinging to a three-point lead despite an off night from Boston star Kyrie Irving, who was 4 of 18 for nine points.

That's when Antetokounmpo helped the Bucks slam the door.

By the time Antetokounmpo subbed out for the first time in the third quarter, he had scored 15 of his 29 points in the period, including 13 during a 17-2 run.

IT'S ON: Harden's least favorite ref gets call for Game 2 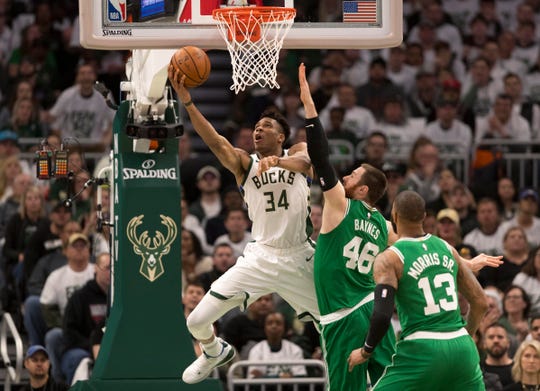 The Bucks didn't slow down after that. Powered by their defense, which ramped up the intensity and coaxed the Celtics into a bevy of tough, contested shots throughout the third quarter, Milwaukee closed the quarter with a 24-2 run that effectively ended the game.

During that seven-minute stretch, the Celtics went just 1 of 12 from the floor with six turnovers. Boston, which seemingly couldn't miss on Sunday and got plenty of open looks, finished the night just 39.5% from the floor against a much more aggressive Bucks defense.

In addition to Antetokounmpo and Middleton, the Bucks got 21 points, five assists and three rebounds from Eric Bledsoe, who was an inside out threat and an antagonist on defense. George Hill added 10 points off the bench while Mirotic, despite a poor shooting night, finished with nine points and nine rebounds along with a team-high three steals.

As they intimated on Monday, the Bucks weren't going to flip the script by making major changes. Instead, they wanted to look more like the team that won a league-leading 60 games in the regular season followed by a sweep in the first round of the playoffs.

Yes, there were adjustments. Coach Mike Budenholzer went with Nikola Mirotic instead of Sterling Brown in the starting lineup, something that didn't make an immediate difference. Milwaukee also started switching more on defense and spaced out better on offense, with the ball moving well to open shooters.

Add in a heightened intensity and attention and consistent shot-making and the Bucks responded to their biggest loss of the season with what was undoubtedly their most important win. After facing questions about whether their scheme could work against top-level competition, the Bucks made a few tweaks and offered a resounding answer.