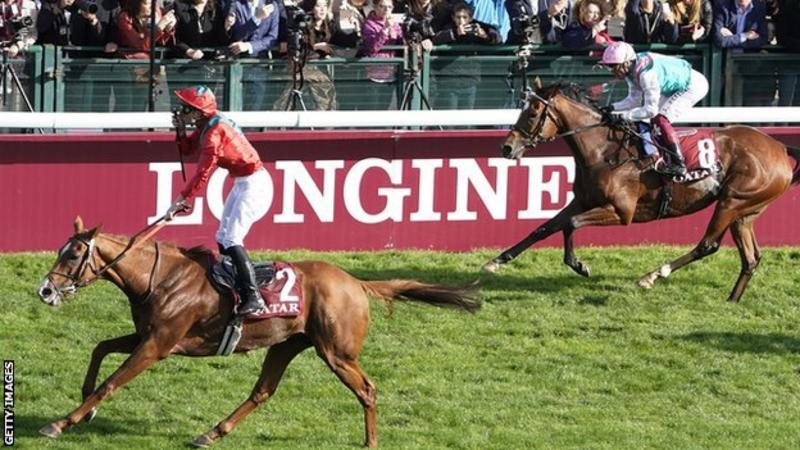 Enable is not among the entries for Saturday’s British Champions Day but Ascot has still attracted a variety of high-class contenders.

The two-time Prix de l’Arc de Triomphe winner was narrowly denied a historic hat-trick in what had been billed as her final outing 10 days ago.

It remains possible the five-year-old, ridden by Frankie Dettori for trainer John Gosden, will race again.

But Monday’s five-day entries confirmed the horse would not be at Ascot.

Lord Grimthorpe – racing manager to Enable owner Prince Khalid Abdullah – said a decision is yet to be made on the horse’s future.

“In everybody’s minds, it is getting towards the end,” he told the BBC.

If the mare does run again, the Breeders’ Cup meeting at Santa Anita next month is an option.

Heavy rain has hit the Berkshire course with 40mm in the last week.

Japanese challenger Deirdre, a winner at Glorious Goodwood, is a possible for the Champion Stakes alongside Japan, who was fourth in the Arc.

But punters have been backing soft-ground specialist Addeybb with the prospect of heavy going.

The track has the option of switching to its inner course if needed, usually reserved for hurdles races and unwatered over the summer.

Saturday’s Champions Day is the ninth edition of Britain’s richest raceday, which boasts prize money of more than £4m.

Sprint: The last three winners – Sands Of Mali, Librisa Breeze and The Tin Man – are set to take on triple Group One victor Advertise, and One Master who won at Longchamp on Arc day.

Fillies and Mares: Starcatcher heads the betting, while Magical is among entries for Irish trainer Aidan O’Brien.

Long Distance Cup: Stradivarius will seek an 11th consecutive victory for Dettori and Gosden against rivals that could include St Leger winner Kew Gardens.

Champion Stakes: Mehdaayih, a son of Frankel, will look to continue his sire’s influence on this race. Frankel won in 2012 on his final start and another son – Cracksman – won the last two runnings.