THE Breeders' Cup concludes with a mouthwatering card at Keeneland on Saturday night.

There is plenty of British and Irish interest throughout the meeting, which is live on Sky Sports Racing. We take an in-depth look at some of the big races. 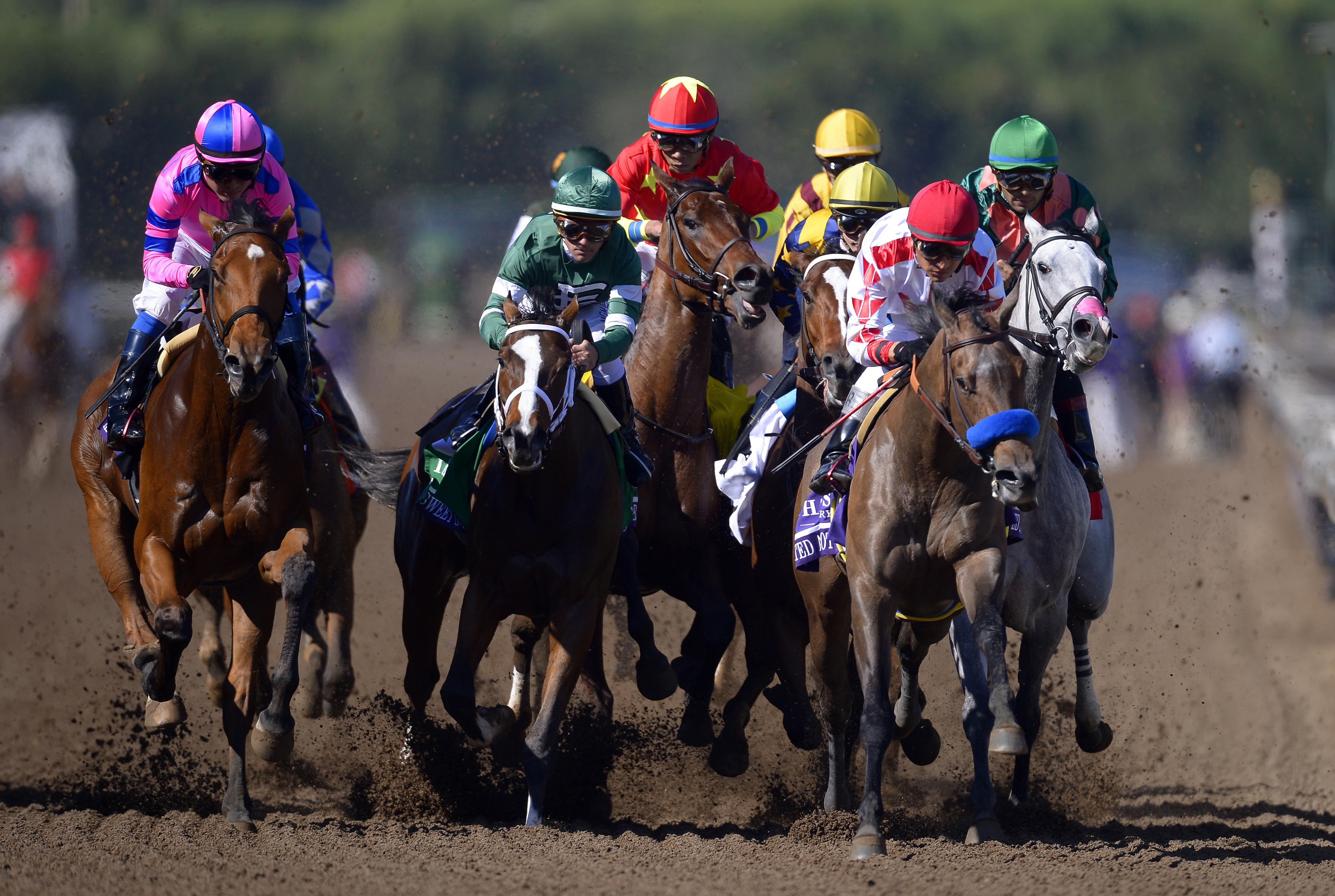 T&Cs: New customer offer. Place a min 5 bet (or 2.5 e/w), at minimum odds of 1/5 (1.2) on the 'Win or E/W' market in the 17:02 Breeders' Cup (Keeneland), Saturday, November 7th. After the qualifying bet has been settled, you'll get a £5 free bet for each remaining Breeders' Cup race + 10 Sports Free Bet. Deposits using Credit/Debit cards or Apple Pay only. Free bets are only valid for the specified race and are awarded when the qualifying bet has been settled. Free bet stakes not returned with winnings. T&Cs apply. 18+ Begambleaware.org

A tricky old race but one which can go the way of the high-class mare OLEKSANDRA.

She was last sighted winning bravely in Grade 1 company at Belmont back in June before she suffered a setback.

But she has reportedly been working the house down in the mornings and she arrives here nice and fresh. She remains open to some improvement, even at the age of six.

Imprimis isn't opposed lightly, and he showed a willing attitude when beating Bombard at Kentucky Downs in his prep for this.

He is drawn well and will be bang there, as will Got Stormy who has been transformed into a high-class sprinter this year. He has a strong finishing kick, so if they go hard early expect to see him flying home late.

Leinster arrives seeking a hat-trick and is another leading contender, particularly given his fine record at this track.

Glass Slippers is the sole European runner in the field and she races around a turn for the first time in over two years. But this is her time of year and if she can repeat her recent Abbaye run she could play a major role.

RUSHING FALL has really found her feet this year and arrives with three straight wins under her belt.

She was worth more than the winning margin of a neck over Mean Mary in a Grade 1 at Saratoga last time out and she can provide her excellent trainer Chad Brown with a fifth win in the race.

Mean Mary was on a winning run of her own before she suffered a narrow defeat at the hands of the selection. She should give her all again but needs to find more if she is to turn the tables.

The Joseph O'Brien-trained Iridessa won this 12 months ago, and this time his dad Aidan has a leading contender in Peaceful.

She bombed out on heavy ground in the Sun Chariot, but she'd been having a fine season up until that point and she looks likely to appreciate this two-turn contest with the forecast sound surface a big plus.

She is feared most, though Terebellum was ahead of her at Newmarket last time ad shaped as though she would improve for the run. She is bang in contention.

Cayenne Pepper and Audarya have tough draws to overcome and they'll need plenty of luck if they're to figure for Jessie Harrington and James Fanshawe respectively.

I wouldn't put you off having a saver on Sistercharlie and decent odds. Chad Brown's one-time superstar was far from disgraced behind her stablemate Rushing Fall last time and will no doubt have been trained to peak today.

UNI was absolutely brilliant when winning this 12 months ago at Santa Anita and she can go back-to-back under Joel Rosario, having recently advertised her well-being with a cosy Grade 1 win at this course.

She overcame a tricky draw to win impressively last November and she faces a similar scenario this year having been handed stall 11.

But she has push-button acceleration, so as long as she is within shouting distance of the leaders turning into the straight she should be able to mow her rivals down.

Kameko heads the betting and he was a ready winner of the Joel Stakes in September. He's no slouch but there's a doubt that this tight, two-turn mile will see him to best effect.

Siskin, on the other hand, has long looked the ideal type for this race. He has loads of speed and Colin Keane should be able to get him in the boxseat from stall four. He isn't opposed lightly.

South American star Ivar gained his first Grade 1 since being shipped to the States last month. His overall level of form needs to be improved upon, but now he's acclimatised to the US style of racing he could have more to offer.

Digital Age and Halladay add further depth to the home team's challenge, while dear old Safe Voyage has been better than ever this year for John Quinn and he can't be dismissed.

Circus Maximus and Lope Y Fernandez head the Ballydoyle challenge. The former was beaten fair and square by Uni last year and hasn't been at his best of late, so the latter may show up best with this race expected to suit.

5.39: Olexsandra 'arrives fresh having been off since June but she's been working well'

6.18: Complexity 'in a different league at Belmont latest; hard to beat on that form'

6.57: Rushing Fall 'bagged a hat-trick last time and yard have a great record in this'

8.15: Uni 'hugely impressive in this 12 months ago and warmed up with cosy Grade 1 win'

8.54: Ollie's Candy 'keeps hitting the crossbar but had excuses and she can run well at a big price each-way'

9.33: Mogul 'finally delivered at Longchamp last time and has conditions to suit here'

10.18: Authentic 'if he can get across to the lead from stall nine he will be hard to beat'

A cracking race in prospect and a massive opportunity for the Euros to get on the board.

The brilliant Magical is back for a second crack at this race having given Enable a scare at Churchill Downs back in 2018.

She was given too much to do when third behind Addeybb in the Champion Stakes, but she has had yet another busy campaign and her stablemate MOGUL could just have the edge here.

He was threatening to become a hugely disappointing horse this year until he came roaring back to form on fast ground in the Grand Prix de Paris in September.

He missed the Arc due to the Ballydoyle contaminated feed debacle, which could prove a blessing in disguise as he comes here nice and fresh after 55 days off.

The ground has come right for him and he may just have been a bit of a slow-burner this year. He clearly has a big engine and can make it back-to-back wins at the top level.

Dermot Weld's Tarnawa is another major contender for the Irish, and she has taken her form to another level this year. She has the tactical speed to cope with this sort of test so she is not opposed lightly, for all this is the first time she has taken on the boys.

If Lord North is going to get 1m4f it will probably be in this race. However, he has a huge point to prove after bombing out completely in the Champion Stakes.

Channel Maker is the chief hope for the Americans, but he needs to improve markedly to trouble the overseas raiders.

An absolute humdinger of a Breeders' Cup Classic.

Bob Baffert's Improbable heads the market having lowered the colours of his stablemate Maximum Security in the Awesome Again Stakes at Santa Anita back in September.

He was dominant that day and he has taken his form to a new level this season, while he has advertised his versatility by winning under differing tactics.

Maximum Security has struggled to recapture his best form since winning the Saudi Cup in February, and there is a suspicion he may struggle to reverse the form with his barn companion.

But Baffert has a third string to his bow and it could be AUTHENTIC who comes out on top. He burst the Tiz The Law bubble (more on that horse in a second) in the Kentucky Derby and pulled miles clear with Swiss Skydiver when second in the Preakness last time out.

He's a front-running monster, and if John Velazquez can get him out and rolling along early I expect he will be very tough to pass. He gets a bit of weight from his elders, too. Every little helps.

Tiz The Law has been one of the stories of the season and he is reported to have benefited from some time off since his Kentucky Derby defeat. But his low draw is a concern as he likes to see daylight in his races. There's a chance he could get swamped early and shuffled back.

The seven-year-old Tom's D'Etat claimed the scalp of Improbable earlier in the season, but that horse has improved since then and no horse older than five has won this race.

If you fancy having a stab at one at a huge price, High Power, third in the race last year, goes well fresh and could hit the frame again.