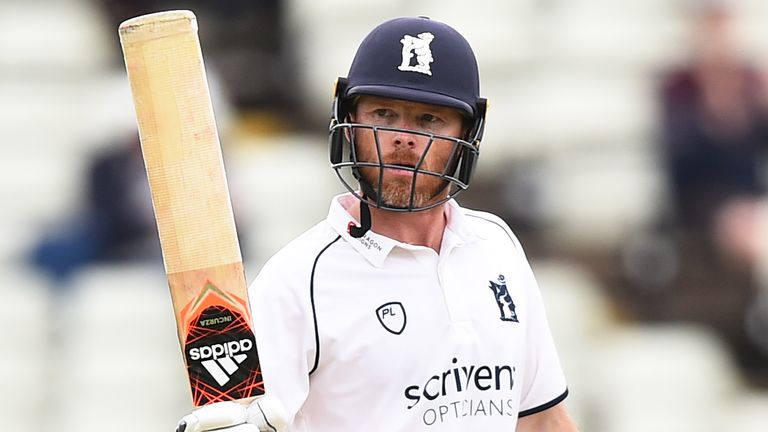 Any stranger watching Bell playing his penultimate first-class innings at Sophia Gardens, after a long and distinguished career at county and international level, would have wondered why he has decided to walk away.

Bell said on Saturday that the desire is there to carry on but feels that “my body can’t keep up to the demands of the game and I know that the time is right”.

He will be much missed after another accomplished innings that helped his team recover from 23-3 and apart from the youthful Dan Mousley, who helped him add 70 for the fourth wicket, Bell was a class apart from the other batsmen as Warwickshire were bowled out for 186. 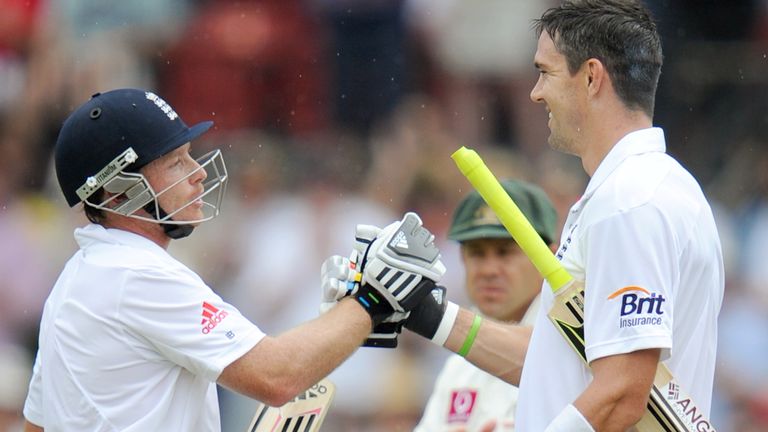 “What a wonderful career, one of the most stylish batters to play the game. We’ll miss his cover drives, his late cuts for four. As a character in the dressing room, he was always cheeky, fun and always a pleasure to be around.”

His half-century, made off 116 balls which included nine fours, included some of his trademark cover drives for four but it was a battling rather than a dashing innings that held Warwickshire together.

Glamorgan closed on 4-1 in reply. Glamorgan vs Warks scorecard

Sam Cook returned season-best figures as Essex‘s final hopes remained on track with 15 wickets falling on day one at Chelmsford.

Essex are heavy favourites to top the South Group but to qualify for the Lord’s final later this month they need to score more points than either the winner of the Central or North section. Essex vs Middlesex scorecard

Lancashire‘s Josh Bohannon saved his side’s blushes at Aigburth with a brilliant 94 as the Red Rose made heavy work of reaching 206-8 on the first day of their clash with Derbyshire.

Bolton-born Bohannon batted for just shy of 300 minutes before departing and his belligerence was much needed by the hosts on a day when runs were hard to come by – partly due to the accuracy of Derbyshire’s bowlers and partly due to a slow outfield saturated by overnight rain.

Derbyshire’s chances of a vital victory as they chase top spot in the north group were boosted when Keaton Jennings was trapped lbw by Sam Connors from the first delivery of the match.

Alex Davies departed soon after without scoring, when he was also adjudged lbw, following an excellent delivery from Luis Reece, to leave the Red Rose teetering on 2-2 before Bohannon’s intervention. Lancashire vs Derbyshire scorecard

Kent all-rounder Darren Stevens took his third five-wicket haul of the summer as Hampshire succumbed for 191 on the opening day of their South Group clash at Canterbury.

The 44-year-old bowled 27 overs in four separate stints to finish with a season’s best 5-37. 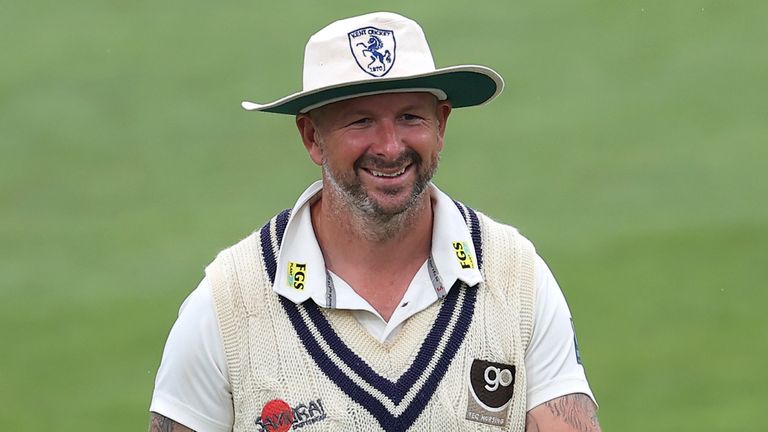 The veteran, making his fifth red-ball appearance of a shortened campaign, has now taken 25 wickets at an average of 16.68 apiece.

After Stevens’ heroics, Kent lost both their openers in fast-fading light.

Jordan Cox was caught at slip off teenager Scott Currie and Daniel Bell-Drummond had his off-stump trimmed by Ian Holland as the hosts went to stumps on 21-2 to trail by 170 going into day two. Kent vs Hampshire scorecard

Yorkshire‘s Ben Coad claimed a superb 5-18 as Leicestershire were bowled out for 124 before tea during a seamer-friendly opening day at Emerald Headingley.

The 26-year-old excelled with the new ball and returned after lunch for further success as the hosts made an encouraging start to their bid for a victory which could see them advance to the five-day Lord’s final later this month. 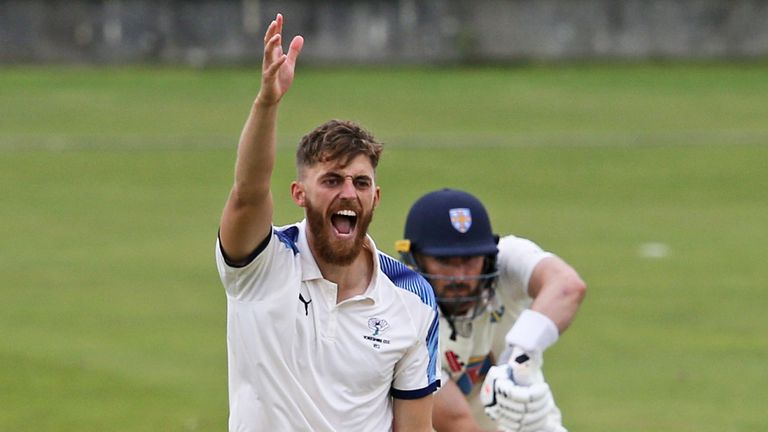 They realistically need to win to topple leaders Derbyshire and finish top of the North Group. Then, they must finish as one of the two best group winners from the North, South and Central.

Rain again played its part for the third successive four-day game on this ground, with Yorkshire closing on 36-2 from 12.1 overs of their reply. There was no play beyond 4pm and 28.5 overs lost.

Second-placed Yorkshire know that if Derbyshire, who led the North Group by five points before the final round, beat Lancashire at Liverpool and accrue 20 points, there is nothing they can do. Yorkshire vs Leics scorecard

Tom Haines negotiated both a fiery second spell from Jamie Overton and a verbal spat with left-arm spinner Dan Moriarty to reach a superb 105 not out in Sussex‘s 239-3 against Surrey at the Kia Oval.

It was the 21-year-old’s second first-class hundred and he featured in century stands with both Aaron Thomason and Delray Rawlins as Sussex made an impressive start to the final round of Bob Willis Trophy fixtures after winning the toss and opting for first use of a slow-paced pitch.

Rawlins made a punchy 65 from 88 balls, launching both Moriarty and Scott Borthwick’s leg-spin for massive straight sixes, while Thomason’s nuggety 49 in an unfamiliar opening role was another important contribution to the Sussex cause. Surrey vs Sussex scorecard

Somerset skipper Tom Abell continued his fine form in the Bob Willis Trophy by top-scoring on the opening day of a see-saw crucial Central Group match with Worcestershire.

Abell showed his class in striking 59 to help ensure his side posted a challenging total on a green-tinged pitch offering encouragement to the seamers. 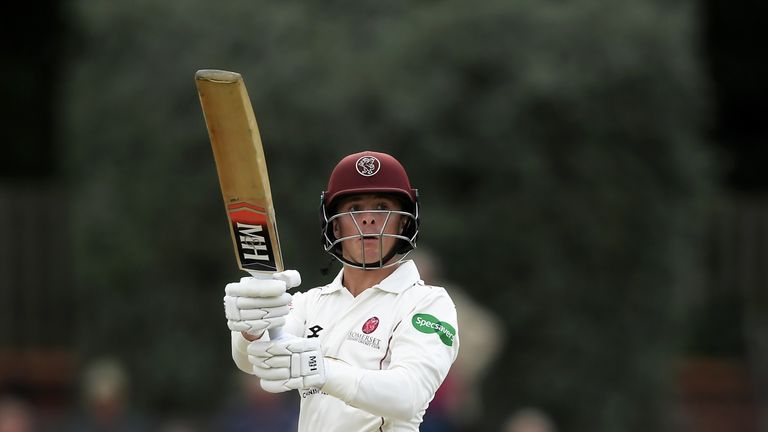 It followed on from his 119 against Glamorgan and an unbeaten 101 versus Gloucestershire earlier in the competition as group leaders Somerset totalled 251 all out in 83.1 overs.