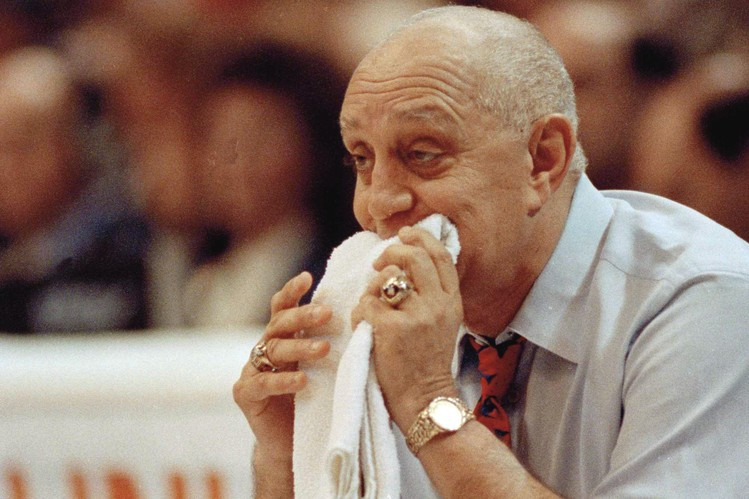 Support the Hotline: Receive three months of unlimited access for just 99 cents. Yep, that’s 99 cents for 90 days, with the option to cancel anytime. Details are here, and thanks for your support.

Gonzaga joined elite company on Monday night, becoming the latest powerhouse to enter the Final Four undefeated but lose its bid for perfection.

The list includes the 2015 Kentucky Wildcats, with Devin Booker and Karl-Anthony Towns, the 1991 UNLV Runnin’ Rebels, one of the most feared teams of all time, and the 1979 Indiana State Sycamores, with a guy named Bird.

Despite the blowout loss to Baylor — and the subsequent told-you-so chirping from skeptics — the Bulldogs are indisputably one of the Best of the West.

They’re included below in our ranking of the greatest teams from the western third of the country since end of the UCLA dynasty.

Notes on the following:

— We only considered teams that reached the Final Four. Arizona ’98 was terrific, but you can’t lose by 25 points in the Elite Eight and be one of the best ever.

— In some cases, teams that failed to win the title are ranked above a national champion. If that doesn’t compute, craft your own list and send it our way (to the email address below). We’ll publish them at a later date.

— Comparing teams across eras is never easy, especially with the implementation of the shot clock and 3-point line and the NBA Draft early-entry process. Somehow, we endured.

1. UNLV 1990: We pondered the No. 1 spot for about two seconds. Yes, the Rebels lost five games. But they played seven ranked opponents during the regular season — one of the losses was to an LSU team that had Shaq and Chris Jackson — and needed time to assimilate transfer Larry Johnson into the rotation. The Rebels (35-5) were physically imposing, highly skilled and played relentless defense. In the NCAAs, they went to a gear rarely seen. The championship game performance — the 30-point win over a Duke team that would subsequently become a back-to-back winner — was the greatest in the sport’s history.

2. UCLA 1995: The best of UCLA’s post-dynasty teams had six NBA Draft picks and the Wooden Award winner (Ed O’Bannon) but needed a 4.8-second dash by Tyus Edney to survive Missouri in the second round. The Bruins (31-2) handled Ray Allen and UConn in the Elite Eight and were too much for Oklahoma State and Arkansas in the Final Four. They dropped two games in the middle of the season, then made mincemeat of Pac-12 opponents down the stretch.

3. UNLV 1991: This would have been our pick for the top spot had the Rebels (34-1) won the championship, but they lost to Duke in a legendary semifinal that was littered with controversial calls in Duke’s favor. The starting lineup was devastating, but this team, for all its dominance, lacked the depth and physicality of the ’90 version.

4. Arizona 1988: The best of the Lute Olson teams, even though it didn’t win the title. Led by Sean Elliott and Steve Kerr, the Wildcats (35-3) spent three months at No. 1, lost just once in conference play and beat both Duke and North Carolina. A nightmare 3-point shooting performance in the semifinals against Oklahoma kept them from facing Danny Manning in the championship.

5. UCLA 1976: The first team without John Wooden in charge was loaded with his recruits. The Bruins went 27-5 under Gene Bartow, but two of the losses (in the season opener and the Final Four) were to the Indiana team that achieved perfection. Marques Johnson, who would become a five-time NBA all-star, wasn’t UCLA’s top scorer. That role went to center Richard Washington.

6. Gonzaga 2021: How quickly we forget. Until tipoff Monday, the Zags were held in the highest esteem — and with good reason: They won 31 consecutive games, decimated USC in the Elite Eight and dominated four ranked opponents in non-conference play. Baylor presented significant matchup problems, and we’re skeptical the Zags (31-1) could have survived under normal circumstances. (Baylor was our pre-tournament pick.) But the epic overtime duel with UCLA in the semifinals clearly took a toll mentally and physically.

7. UNLV 1977: The first of Jerry Tarkanian’s great teams in Sin City — and a relative newcomer to Division I — lost by one point to North Carolina in the Final Four. Although overshadowed by subsequent UNLV powerhouses (and controversies), these Rebels (29-3) scored at least 100 points in 21 games. Reggie Theus, a multi-time NBA all-star, was their fourth-leading scorer.

8. Arizona 1997: The Wildcats finished 11-7 in conference play and lost their final two regular-season games before igniting in the NCAAs. Their trajectory loosely tracks this year’s UCLA team, except the Wildcats (25-9) survived all their close calls in the tournament. They took down three No. 1 seeds and beat Kentucky in the championship in overtime, thanks largely to a stellar backcourt of Mike Bibby, Miles Simon and Michael Dickerson.

9. UCLA 2008: Our pick for the best of the Ben Howland teams; certainly, it was the most talented. The Bruins (35-4) were ranked No. 2 at the start of the season, never dropped out of the top 10, and won 19 of their 21 conferences games (including the tournament). They rolled into the Final Four but were eliminated by Memphis in the semifinals. Freshman Kevin Love was the top scorer, followed by Darren Collison and then Russell Westbrook.

10. Gonzaga 2017: With point guard Nigel Williams-Goss as the top scorer and a freshman class that included (get this) Zach Collins, Killian Tillie and Rui Hachimura, the Zags (37-2) lost just once prior to the NCAAs: to BYU in the regular-season finale. They reached the title game but were six points short against North Carolina. Of all the great teams in Spokane, this is the only version we can envision beating the current group.

11. Arizona 2001: The nation’s preseason No. 1 hit an early setback when Olson took a leave of absence to tend to his ailing wife, Bobbi, who would pass away on New Year’s Day. Olson returned to the bench to direct a lineup that included Richard Jefferson and Gilbert Arenas. The Wildcats (28-8) blitzed Michigan State in the semifinals but lost to Duke in the championship.

12. Oregon 2017: After a run to the Elite Eight the previous year, the Ducks opened the 2016-17 season in the top five. They dropped two games early, then rolled to the Pac-12 regular-season title. A loss to Arizona in the conference tournament hardly slowed their momentum. Led by Dillon Brooks and Tyler Dorsey, the Ducks (33-6) pushed eventual champ North Carolina to the limit in the Final Four.

*** Pac-12 Hotline is not endorsed or sponsored by the Pac-12 Conference, and the views expressed herein do not necessarily reflect the views of the Conference.