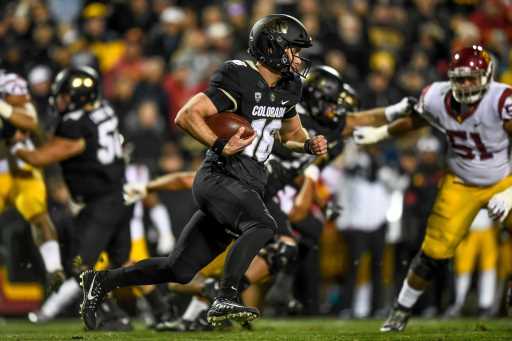 The defense? Worn out. The running game? Inconsistent. The passing game? Mercurial. The fans? Disillusioned.

Here’s the kicker: We’re not talking about CU.

Because those traits could also be applied to the present state of the USC Trojans, who limp into Folsom Field this weekend with a 2-2 record and off a 45-27 beatdown at home to Oregon State.

It was the Men of Troy’s first loss in Los Angeles since 1960 to the mighty Beavers (3-1), who jumped up to No. 5 in the latest installment of The Denver Post’s Best of the West College Football Top 25, which was posted Monday to denverpost.com.

The Trojans have never lost to CU, a mark of 14-0 that dates back to 1927. USC is 9-0 against the Buffs since the latter joined the Pac-12, but three of the last five meetings have been decided by four points or fewer, including a come-from-behind 35-31 Trojans victory during the program’s last visit to Boulder in October 2019.

If there’s hope for the Buffs to end their Trojans hex, it’s on two fronts. First, USC’s run defense, which ranks ninth in the Pac-12 (157.5 opponent rush yards allowed per game) and is allowing foes to average 4.85 yards per carry. Second, the Trojans’ turnover margin (-0.3), which ranks eighth in the league thanks to six interceptions thrown and three fumbles lost through four tilts.

USC hasn’t lost back-to-back Pac-12 games since November 2018. If CU has any gas left in the tank after dispiriting losses to Minnesota at home (30-0) and Arizona State on the road (35-13), a takedown of the Trojans could change the subject — and the mood — in Boulder for the better.

The Denver Post Best of the West College Football poll each Monday ranks the top 25 FBS programs from the Front Range to the Pacific Ocean, as culled from the Pac-12, the Mountain West and BYU.

The rest of the latest rankings follow, with in-state squads listed in bold:

The next Best of the West poll will post Monday, Oct. 4.