When Julio Urias struck out Willy Adames of the Tampa Bay Rays to secure the World Series title for the Los Angeles Dodgers last week, it capped an arduous achievement for baseball.

There were months of bitter negotiations between Major League Baseball and the players’ union over the structure and finances of a season played during a pandemic without fans in the stands. There were coronavirus outbreaks within the Miami Marlins and St. Louis Cardinals organizations early in the season that almost jeopardized the truncated, 60-game schedule. There was a strengthening of the health and safety protocols that helped ensure the completion of the regular season and the expanded 16-team postseason. And there was painful belt tightening in an industry that lost billions of dollars.

Now comes an even taller task: doing it all over again in 2021 with a much longer season and continued uncertainty surrounding the virus.

“There’s a lot that we’ll need to work out,” Tony Clark, the executive director of the players’ union, said in a phone interview this week. Dan Halem, M.L.B.’s deputy commissioner, added, “There’s a lot of contingencies that we’re going to have to plan for because there’s no one at the moment that knows what ’21 is going to look like.”

Before the World Series ended, Clark said, the union began what he called an informal dialogue with M.L.B. about next season. Not only are there baseball matters to sort out — such as the potential continuation of the expanded playoffs and the universal designated hitter — but health and economic ones, too.

All of this will happen against the backdrop of fragile labor relations, fears of a brutal market for players this off-season and slashed payrolls next season. On Dec. 1, 2021, the collective bargaining agreement between team owners and players is set to expire.

“Having a conversation that works through the issues that does not play out publicly is to everyone’s benefit,” Clark said, alluding to the contentious discussions ahead of the 2020 season. 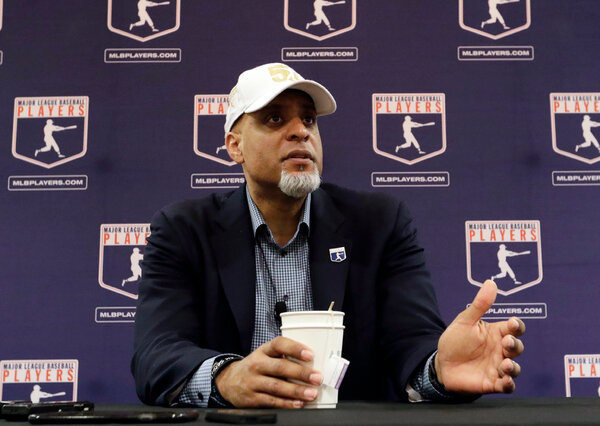 For now, M.L.B. and the players’ union have a foundation for the 2021 season. A traditional slate of spring training games starting in February and a 162-game regular season starting on April 1 were announced earlier this year. Any changes, like those made to the 2020 season amid a national emergency, are subject to discussions between both sides.

“My hope is that there’s a sense of normalcy to 2021,” Clark said. In a phone interview this week, Halem added, “Right now, we’re planning for a normal season.”

But so much can change between now and when pitchers and catchers are expected to report to spring training in Florida and Arizona. “Everything we plan for has to be subject to the circumstances that exist, when we’re about to start, vis-à-vis Covid,” said Halem, who oversees the league’s labor negotiations.

Among the questions Halem said were on baseball’s mind: While positive cases are surging to record levels in the United States, will that be the case come February? When will a vaccine arrive? Would players have access to it before spring training? Before the regular season? What contingencies will the sides plan for over a longer season? What changes will they make to their extensive health and safety operations manual, which outlined the every-other-day testing program for players and on-field staff members?

“It’s hard to make decisions because nobody really has concrete information yet,” Halem said. “Hopefully each month we’ll get a little more and more information about what next year may look like.”

Everything about a longer season is more difficult, Halem said. So many things had to go right, from testing deliveries to individual responsibility, to pull off the 60-game regular season. Now multiply that by nearly three. Playing more games means more chances for infection, and potentially more games to postpone to a finite number of off days should positive cases arise.

Halem and Clark said the lessons learned from the 2020 season will help M.L.B. and the players’ union plan for the challenges of next year. Until Dodgers third baseman Justin Turner learned he had tested positive for the coronavirus during the final game of the World Series — and left his mandated isolation to celebrate the championship with his teammates on the field — there hadn’t been a positive case among baseball players for nearly two months.

“There was a physical toll as well as a mental toll on all of those involved, which is going to be important to take into account moving forward,” Clark said. “As it relates to protocols, appreciating what we knew back in March, April and May versus what we learned in July, August and September is all going to be beneficial.”

But the economics of the sport could, again, be a major source of tension between M.L.B. and the players’ union.

For months ahead of the 2020 season, team owners and players vehemently and publicly disagreed over the length and compensation of the season. Owners wanted players to take a larger pay cut because nearly 40 percent of the league’s revenue came from ticket sales and attendance-related income. (Fans were not allowed in until the neutral-site National League Championship Series and World Series in Texas.) Players held firm to a March agreement that called for prorated salaries.

Ultimately, Rob Manfred, the league’s commissioner, imposed the 2020 schedule, which began on July 23. This preserved the players’ right to file a grievance, which was expected this off-season. So for the 2021 season, how many games will actually be played? Will there be fans in attendance in all 30 stadiums, and at what capacity in which municipalities? Will players be asked to take a pay cut as a result? How much can owners budget for ahead of an uncertain 2021? Can the sides work out a short-term extension of the expiring C.B.A.?

“There’s just a lot of unknowns,” Clark said. “You anticipate there being an opportunity to work through them. Our players look forward to that conversation happening.”

By some measures, the industry’s financial prognosis is still strong. Despite the pandemic, the Dodgers signed the star outfielder Mookie Betts to a $365 million contract extension before the season. Turner Sports and M.L.B. struck a TV rights extension deal worth about $3.7 billion in September. And the Mets’ sale to a hedge fund manager, Steven A. Cohen, for $2.4 billion is nearly complete.

But there are mounting signs that owners — some of whom have large fixed costs, like stadium payments, no matter the season’s length — may ask their employees to share more of the burden. Manfred has said M.L.B.’s 30 clubs have taken on more debt and suffered about $3 billion in operating losses this year.

John Mozeliak, the Cardinals’ president, told reporters that the team’s 2021 payroll was likely to drop. In a letter to season-ticket holders after the season ended, the Colorado Rockies owner Dick Monfort wrote: “It will take time to rebound, and in some cases, these losses will never be recovered. As a result, there will be nothing normal about this off-season as the industry faces a new economic reality, and each club will have to adjust.”

Hundreds of nonplaying employees across the sport have had their pay cut, been laid off or furloughed. In this off-season, over 30 players — such as Cleveland’s Brad Hand, who led the major leagues in saves — had their 2021 team options declined. Players and agents fear that a larger than usual number of players eligible for salary arbitration will be cut loose by teams.

Clark, whose union has been skeptical of the league’s accounting in the past, said that this off-season’s market “will really distinguish ownership groups that want to compete and grow their fan bases and ensure the long-term well-being of their franchises from those who are willing to continue to sacrifice winning in order to maximize the short term.”

Clark also said that while debt could be a “scary word and proposition” for people who find themselves struggling to pay off home mortgages or student loans, it was a tool for corporations, particularly during an economic downturn when interest rates are low. He added, “So while I appreciate the assertions that have been made, we don’t accept them at face value.”

In response, Halem said that M.L.B., like any businesses that relies on public gatherings, has had its “normal economics” upended by the pandemic.

“Everyone associated with baseball is unfortunately feeling the effects of that,” he added. “We view the players as partners in our business, and this season was only possible because of productive collaboration between teams and players. We look forward to having positive dialogue with the players about how, together, we can take the field again in 2021 in a way that prioritizes health and safety and puts the industry in the strongest financial position possible for the future.”