Melbourne Victory has made one of its best ever starts to an A-League season and triple title winner Kosta Barbarouses says one factor in the club's early success is the strength of mind of the newcomers in the dressing room.

Japanese superstar Keisuke Honda and Swedish international Ola Toivonen have garnered most of the plaudits since their arrival, but Victory boss Kevin Muscat also strengthened his line up by bringing in full backs Storm Roux and Corey Brown as well as Spanish midfielder Raul Baena. 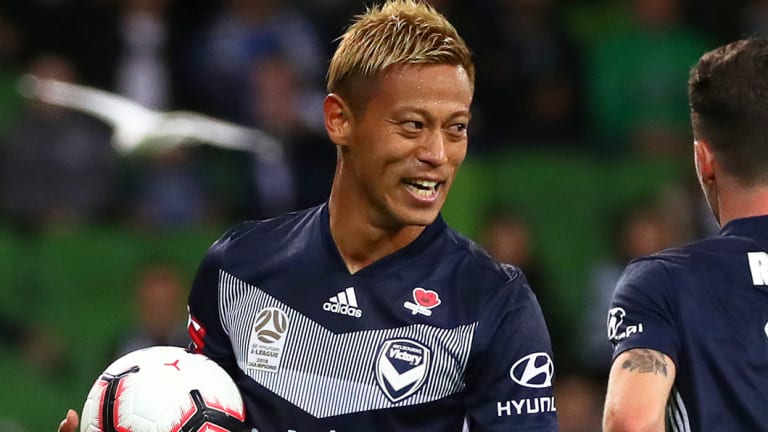 Barbrouses, who is one of the mainstays of the club, says the 4-0 win over Western Sydney Wanderers which took Victory into second place on the table shows the momentum that is building now.

But, save for the influence of the new men, he can't explain why Victory has hit its straps after losing its first two games of the campaign.

"It's strange, you never really know what to expect coming into the season. The year we won in 2018 we had a really good pre-season and then we didn't win until round seven," he said.

"This pre-season we didn't win for six or seven games. It's so hard to judge how the team is going to go before the season starts.

"I can't point to anything (in particular). Players coming in and the experience they bring, how motivated they are and how they adjust to the dressing room plays a big part.

"The squads are quite small in the A-League, 23 maximum, so you need most players really motivated to do well to have a good tilt at the title and I think we have got that this year."

The Kiwi international says the win over the Wanderers was an important one given that Victory might have struggled against such opposition in the past.

"The teams that are not doing so well are always dangerous coming here, they are usually desperate to get a result," he said.

"I thought we battled that really well, we were really professional, 3-0 up at half-time, that was a great half of football.

"Second half we could have went a couple more up and they start throwing a few men forward, it becomes a little bit more unpredictable, a clean sheet, four goals, we are really happy with that."

He was full of praise for the leadership qualities of Honda, the Japanese international who has joined Victory as a marquee player this season.

Barbarouses won a penalty six minutes before half-time. Honda has become the team's penalty taker since joining in the off-season, but he waived his right to take this one and invited Barbarouses to finish from the spot.

"That was Keisuke being a good guy and letting me get off the mark for the season. He just said to me himself, 'are you happy to take it?' I said, 'yeah if you want me to'.

"That's leadership stuff, he wants me to take it to get off the mark and get a bit of confidence in front of goal, so that was really good of him."

Barbarouses is also relishing the chance to play in the forward third with Toivonen.

"Having Ola up top with me, communication is really good, the runs he makes are really smart, he's a big lad, he holds the ball up well, flicks things on for me. And Keisuke is getting better and better.

"Terry (Antonis) as well, they all put in a great shift. It's still early days, there's a lot to be excited about. There are still things we can do a little bit better."