The newborn Perth Stadium wicket, either squalling or sleeping, behaved like a … newborn. And the batsmen of both teams behaved like new parents, fretting over the smallest things, panicking over much else, and eventually (Tim Paine and Virat Kohli) arguing among themselves.

It has been a slightly deranged Test match, and, as when you are watching new arrivals from a safe distance, all the better for it. Cricket’s bias towards batsmen is revealed in its language: a ‘good wicket’ is assumed to be a good wicket for batting. In those terms, the new stadium has produced a frightful wicket, a terror, that has nevertheless produced a memorable contest. If bad pitches produce such entertaining cricket, then let bad be the new good. 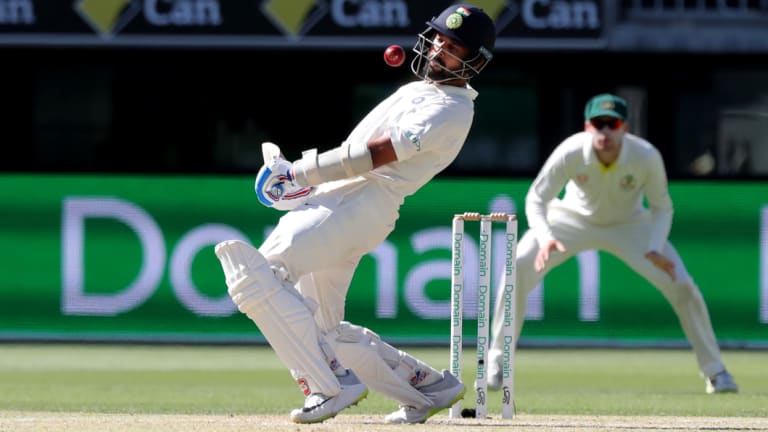 Perfect pitch: Murali Vijay keeps his eye on a tough one at Optus Stadium.Credit:AAP

In this Alice in Wonderland world, you could say that Australia scored 569 runs across their two innings by virtue of their batting weakness. Not good enough to make contact with the dozens and dozens of deliveries, over four days, that flew past their probing bats, they profited from their insufficiency. Paine and Usman Khawaja batted through the first session on Monday, and there were more plays and misses than at a school formal. Only three boundaries were hit, all by Paine. Khawaja, a university graduate, was struck by more good balls than good ideas. Through a process of pure randomness, however, they survived until lunch and ensured that Australia’s lead was on the comfortable side. Mostly thanks to missing the ball, they had secured the advantage.

The randomness was confirmed in the first overs of the middle session, when Paine, Khawaja and three others were dismissed in the space of six overs. As if justice delayed were not justice denied, Mohammed Shami’s luck turned from drought to flood, the seamer picking up six wickets as fortune’s apology for having withheld so many earlier in the game.

At any rate, Starc and Hazlewood seemed like they would rather be doing anything but batting, and the speed at which they ran off the field at the fall of Starc’s wicket showed how very much they were looking forward to getting the ball in hand. While they were batting, the benefit of scoring vital extra runs had to be weighed against the risk of injury. Bowling certainly looked more fun, and they quickly picked up KL Rahul and Cheteshwar Pujara, both trying to get out of the way, forgetting that to miss the ball they should have been trying to hit it.

As mysteriously as a new baby, the pitch had periods when it turned placid, predictable and cute as a button.

As the afternoon wore on, and Nathan Lyon was able exploit the pitch in his own special way and take the presumptive match-winning wicket of Kohli, the question might be asked: If this strip of turf were so ‘poor’ – meaning, if you were a bowler, ‘beautiful’ – how did the match last this long, and how did 900 runs accumulate?

The answer was partly luck, partly determination (accounting for Australia’s two innings), partly supreme batsmanship (Kohli’s first-innings 123) but also because, as mysteriously as a new baby, the pitch had periods when it turned placid, predictable and cute as a button. Often, but not always, this was when the ball lost its hardness.

Mostly there was no apparent reason, a victory of nature – inasmuch as a drop-in pitch can be a product of nature – over the strenuous endeavours of cricket analysis. Amid the madness, there were whole hours when the pitch played very nicely for the batsmen. They just had to be good enough to make the most of these moods while they lasted. The best advice for new parents? Everything is a phase.

For the players, however, these mood swings couldn’t be anything but stressful. The competitive context was so tight, with so much at stake, that it was understandable if tempers would, as it were, crack. When Paine and Kohli came together in confrontation, it was both unnecessary and entirely to be expected. Umpire Chris Gaffaney admonished them. ‘You’re the captains,’ Gaffaney said, as if they should know to set the example. As all parents can attest, knowing is the easy part, it’s the doing that is hard. Especially when the baby’s not giving you any rest.