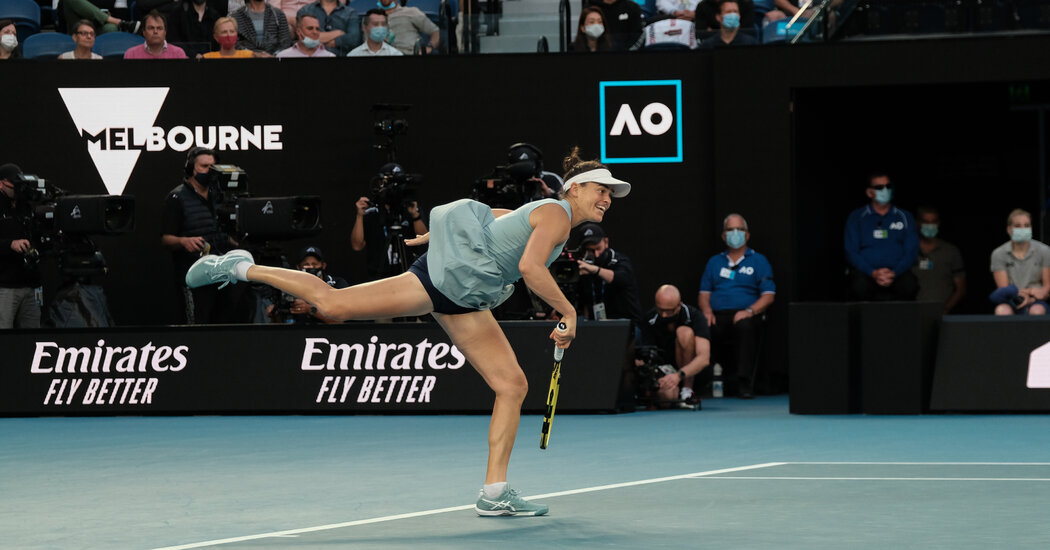 MELBOURNE, Australia — She was playing with house money, a No. 22 seed who spent 15 days confined to a hotel room last month, a former U.C.L.A. Bruin who went to college because she did not have the head for professional tennis at 18 years old and was in need of a backup plan.

The old Jennifer Brady was not the one who took the court Saturday night. This Brady approached this match as though she deserved to be here, like she belonged and did not need a participation medal for making it to her first Grand Slam final. Brady took the court believing she could go toe-to-toe with Naomi Osaka, the three-time (make that four-time) Grand Slam champion and the best player in the world right now.

Brady had done just that in the semifinals at the United States Open in September, pushing Osaka to three sets and forcing her to come up with everything she had. This was the second Grand Slam in six months where Brady was playing in the final three matches.

Brady, 25, predicted she would be nervous at the start of the match, and she was, because she was trying to make something big happen and not just play a supporting role in Osaka’s coronation. She fiddled with her skirt as it blew in the evening breeze. She struggled to find a rhythm while serving. She would land just 48 percent of her first serves.

But down 3-1 in the first set, she broke Osaka then knotted the score at 3-3. At four games each, she had Osaka on the ropes on her serve. In one point, she made a lunging service return, then chased down a drop shot from Osaka to loft the perfect lob. She pumped her arm to the crowd, egging them on to raise the volume. They obliged.

When Osaka prevailed in that game and Brady netted a forehand from close range to give Osaka the first set, she whacked a ball toward the back wall.

“Unfortunate,” she said of that easy ball that somehow ended up in the middle of the net. “Not the way I wanted it to go.”

She had been right there, and then she wasn’t. Then, in a flash, she was in a 4-0 hole in the second set.

This is what Osaka does. The players who lose to her usually lose for the same reason.

Osaka plays so many good shots in the toughest moments that her opponents feel a constant need to hit perfect shot after perfect shot, an impossible task against a player who gives away so little. Serena Williams, the winner of 23 Grand Slam singles titles, fell this way in straight sets Thursday, pounding so many forehands into the net. At this point there probably is not one thing Brady does on a tennis court better than Osaka. She is not alone.

Down a set and two games away from losing the match, Brady easily could have packed it in. Staring across the net at Osaka, a player who had awed Brady in their youth when they played junior tournaments together in Florida, the underdog could have been forgiven for going away.

If there is one thing the tennis world knows now that it did not know six months ago, it is that Brady does not go away. That might have appeared more likely when she went to U.C.L.A., or when she slumped following an early run to the fourth round here and at the U.S. Open in 2017.

But she hooked on with a new coach, Michael Geserer, in early 2019, someone she had never met before, and went to work.

So that is what she did near the end. She broke Osaka to get to 4-1, looked at Geserer with a pumped first and made sure he got the message: Still here. After the changeover, she high-stepped to the baseline, ready to fight, and she did, before ultimately falling 6-4, 6-3.

On the WTA Tour, Brady is known as one of the hardest workers. That she outlasted all but one other player after spending 15 days in a hotel room only happened because she was working off a base of fitness she had been building since early November, when she began her preparations for this tournament, far earlier than most players.

“I belong at this level,” Brady said when asked what she had learned from this experience. “Winning a Grand Slam is totally achievable for me. It is within reach.” There is work to do to improve her skills, she said, so that when she gets to these big moments she does not feel pressure to play perfectly but just well enough to win.

Osaka said that after their battle at the U.S. Open, she told her team that Brady was “going to be a problem.”

That is one way of looking at it. The other is that Brady has established herself as an extremely tough out in big tournaments, especially on hardcourts, even if she was not nearly as tough as she wanted to be Saturday night. But make no mistake, she has no intention of going away.