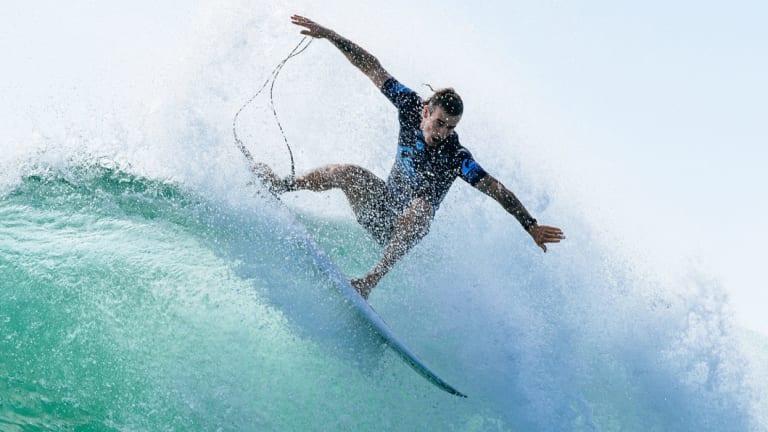 Australian surfer Mikey Wright has been forced to pull the pin on the year’s final leg in Hawaii.Credit:AAP

He won’t brave the Banzai Pipeline this week but expect Mikey Wright to make his presence felt when he joins the championship tour full-time next season.

That’s the confident prediction of tour veteran Joel Parkinson, who will essentially trade places with the 22-year-old as he enters retirement.

Two thirds and a fifth in his eight starts this season, including the elimination of two world champions on the Gold Coast, has Wright 12th in the World Surf League’s championship tour standings and safely inside the top 22 to earn qualification for next season.

Distinctive in the water thanks to his trademark mullet and ambitious, raw style, Wright has looked at home alongside brother Owen and sister Tyler at the highest level.

That is despite him competing sporadically as a wildcard all season and with two bulging discs in his back that have forced him to pull the pin on the year’s final leg in Hawaii.

Former world champion Parkinson, 37, is excited to see what he can achieve next year.

‘‘He’s going to be so suited to the tour,’’ the Gold Coast favourite said of Wright. ‘‘He’s built to go at it; he just throws himself into every manoeuvre and judges will love that.’’

Compatriot Matt Wilkinson’s future is far less certain, with the former world title contender needing a big finish at the Billabong Pipe Masters from this morning to secure his spot next year.

Sitting 24th, the 30-year-old needs to jump two spots to earn qualification and avoid what would be a shock demotion after finishing fifth overall in his past two seasons.

Julian Wilson (equal second) will fly the flag for Australia, needing a win and for series leader Gabriel Medina to miss the final to claim a maiden world title.

Wilson has defied a serious shoulder injury to be within reach of a title after finishing third last season. ‘‘I’ve enjoyed trying to get the best out of myself in the moment,’’ he said. ‘‘There’s been some pressure heats and I’ve loved it; it’s just one more really good opportunity to get stuck into the event.’’

Owen Wright is fifth in the championship standings and Wade Carmichael seventh.

Kelly Slater will make just his third WSL appearance this season, having struggled for fitness since breaking his foot last year.
AAP