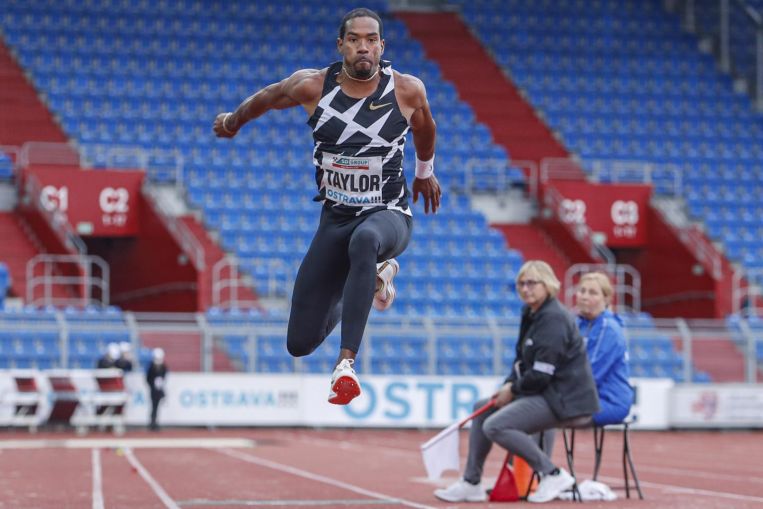 OSTRAVA (REUTERS, AFP) – Olympic and world triple jump champion Christian Taylor looks set to miss the Tokyo Olympics after tearing an Achilles tendon just two months before the Games start, with his coach ruling him out for the rest of the year.

The American, who won gold at the 2012 London and 2016 Rio Olympics, was injured during a meet in Ostrava in the Czech Republic on Wednesday (May 19).

“It was his right Achilles and a complete rupture. We got him to a surgeon in Germany and got it repaired this morning,” Rana Reider, Taylor’s long-time coach, told Reuters.

“The surgery went well and they were able to repair it. It was a clean break and a clean surgery. He was pretty happy with it (the way the surgery went).”

Taylor’s partner, Austrian hurdler Beate Schrott, wrote on her Instagram account: “I don’t have the words to describe this situation… It’s terrible news.”

Asked if he thought Taylor would be back this year, Reider said: “I don’t think so.”

The injury will rob the Tokyo Games of the eagerly-awaited clash between Taylor and world indoor record holder Hugues-Fabrice Zango of Burkina Faso, the winner in Ostrava on Wednesday.

“All the prayers for my BIG MAN @Taylored2jump !!! Fast recovery bro ! I’m still with u whenever u want !!! You already know ! Let’s work for the come back,” tweeted French athlete Teddy Tamgho, a former rival of Taylor.

The United States athletics federation wished its 30-year-old athlete a speedy recovery without confirming the injury.

The Tokyo Olympic Games are due to start on July 23 after being delayed by a year due to the coronavirus pandemic.