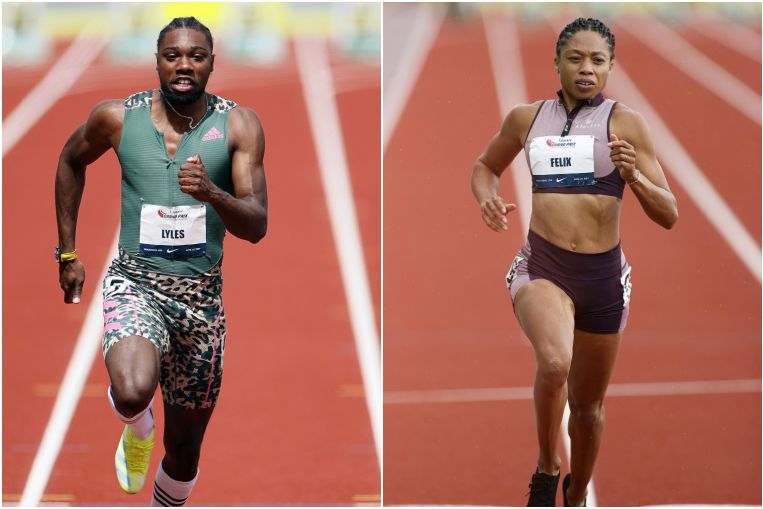 LOS ANGELES (REUTERS) – Americans Noah Lyles and Allyson Felix finished their races with a burst of speed while National Football League star DK Metcalf outperformed expectations but came up short of making next month’s US Olympic trials at the Golden Games meet in Walnut, California on Sunday (May 9).

The 200 metres world champion Lyles, the favourite to take home gold in Tokyo, trailed for most of his race but found another gear late to catch countryman Kenny Bednarek over the final five metres to seal the win.

“I don’t always want to rely on my biggest strengths, I want to work on my weaknesses just as much,” Lyles said when asked if he plans to rely on his impressive closing speed going forward. “But today it got the job done.”

Running with her daughter looking on, nine-time Olympic medallist Felix made sure she had a happy Mother’s Day by turning on the jets down the stretch to finish second in her first 200m race of the year.

“It felt good to be back, just kind of working my way,” a smiling Felix said after posting a time of 22.26sec, behind winner Gabby Thomas (22.12) and ahead of Lynna Irby (22.27) as Felix looks to make her fifth Olympics.

“Such a special day, I just wanted to come out here and have fun.”

Seattle Seahawks wide receiver Metcalf, who decided to try his hand at the 100m after he famously chased down a 90-yard interception in an October game, won the respect of the track and field world by posting a time of 10.37sec.

Despite the solid performance, the towering 1.93m player still finished 15th of the 17 in the event and said he plans to turn his attention back to the football field.

“These are world-class athletes, very different from football,” he said. “I’ve got a mini-camp to go to.”

Metcalf stuck around to watch Cravon Gillespie win the 100m final with a time of 9.96sec under sunny skies at Mt. Sac college.

Rising star Sha’Carri Richardson won the 100m by a comfortable margin despite facing headwinds. The blue-haired dynamo, who is a favourite to win the event in Tokyo, posted a time of 10.74sec, ahead of Javianne Oliver and Morolake Akinosun.

“Everybody should keep their eyes open,” she said. “And I want everyone to know, we’re not done yet!”

Fellow American Elle Purrier was also impressive, winning the 1,500m with a sub-4 minute time while the world record holder in the 100m hurdles, Keni Harrison, also cruised the victory.

Rai Benjamin posted the world’s best time so far this year to win the 400m hurdles in 47.13sec but said he had room to improve.

“I have a lot to work on,” he said. “A few missteps in the race, I was kind of behind, but I just trusted my fitness and brought it home.”