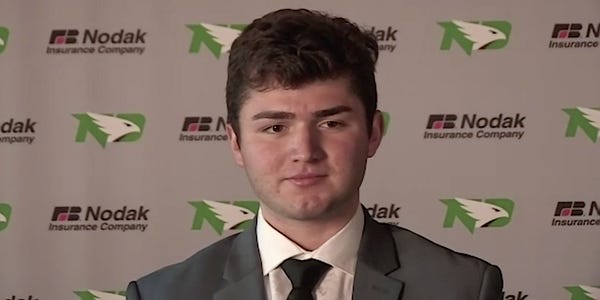 The Arizona Coyotes on Thursday renounced the draft rights to Mitchell Miller, an 18-year-old defenseman taken in the fourth-round of the 2020 draft.

As first reported by The Arizona Republic's Craig Harris and Jose M. Romero on October 26, Miller had a history of bullying and assaulting Isaiah Meyer-Crothers, a Black classmate with developmental disabilities, in 2016.

Meyer-Crothers had told the Arizona Republic that Miller had called him the "N-word" and "brownie."

The Coyotes initially told The Arizona Republic that they were aware of Miller's history and wanted to be part of the "solution" and combat bullying and racism.

Coyotes General Manager Bill Armstrong, who was not involved in the draft process, told The Arizona Republic that Miller had sent a letter to every NHL team before the draft explaining the incident and apologizing for his behavior.

However, on Thursday, team president and CEO Xavier Gutierrez issued a statement saying the team learned more about the bullying incidents and that it didn't "align with the core values and vision for our organization."

"We have decided to renounce the rights to Mitchell Miller, effective immediately," Gutierrez said  in a statement. "Prior to selecting Mitchell in the NHL Draft, we were aware that a bullying incident took place in 2016. We do not condone this type of behavior but embraced this as a teachable moment to work with Mitchell to make him accountable for his actions and provide him with an opportunity to be a leader on anti-bullying and anti-racism efforts. We have learned more about the entire matter, and more importantly, the impact it has had on Isaiah and the Meyer-Crothers family. What we learned does not align with the core values and vision for our organization and leads to our decision to renounce our draft rights.

"On behalf of the Arizona Coyotes ownership and our entire organization, I would like to apologize to Isaiah and the Meyer-Crothers family. We are building a model franchise on and off the ice and will do the right thing for Isaiah and the Meyer-Crothers family, our fans and our partners. Mr. Miller is now a free agent and can pursue his dream of becoming an NHL player elsewhere."

Miller issued a statement to The Arizona Republic, apologizing for the incidents, but not directly to Meyer-Crothers.

"I am extremely sorry about the bullying incident that occurred in 2016 while I was in eighth grade. I was young, immature, and feel terrible about my actions," Miller said.

According to ESPN's Greg Wyshynski, Miller is committed to play at the University of North Dakota this season. At the time of the Arizona Republic story, the school had said it planned to keep Miller and try to "assist him in his continuing growth as a human being."