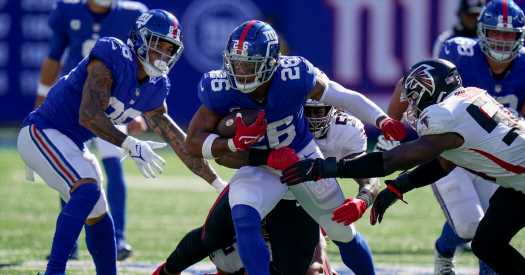 This season, we’ve enlisted two experts — one familiar with the ins and outs of New York’s football teams, the other a nationally focused football analyst — to answer an essential question as a service to readers: Are these teams good yet?

Devin Gordon, who has written about sports for ESPN and GQ and is the author of “So Many Ways to Lose: The Amazin’ True Story of the New York Mets, the Best Worst Team in Sports,” observed both the Giants and the Jets from a locally focused perspective.

In last week’s edition, I introduced the concept of “funnible” — the evolutionary state in which a young team is extremely fun to watch but also still, at root, terrible at football — and offered the 2021 Giants as a textbook example. Sunday’s loss to the Atlanta Falcons, a team the Giants should have run circles around — and frequently did at times — was a master class in funnible football.

Like last week, the Giants once again lost on a field goal as time expired, but let’s focus on a specific play: midway through the third quarter, with the Giants behind, 7-6, but driving into Falcons’ territory and facing a crucial third-and-4. Daniel Jones called an audible, and those of us watching at home could hear the chaos at the line of scrimmage. “WHAT IS THE PLAY?” a Giants player shouted. “WHAT IS THE PLAY?”

Whatever the play was, it didn’t work. The Giants got flagged for holding and there ended the drive. The game did not turn on this play, just to be clear, but if you’re a Giants fan, your confidence probably did.

For one drive in the fourth quarter, though, the Giants showed why they’re worth watching every week: jump-ball specialist Kenny Golladay drew a pass interference call in the end zone, Saquon Barkley vaulted three stories over the pile for his first touchdown since 2019, and Jones ran in a keeper for the 2-point conversion. They held a 14-7 lead heading into the fourth quarter, and cornerback Adoree’ Jackson dropped a potential game-sealing interception of a Matt Ryan pass in the end zone. Sure, the Falcons’ game-tying touchdown came a few plays later but … consider me tantalized.

Every player on the Giants’ roster better bring their jogging shoes for practice this week — there will be laps upon laps to run after Sunday’s bad loss to the Falcons. A walk-off field goal from Atlanta kicker Younghoe Koo sent the Giants to 0-3 and a guaranteed them spot at the bottom of the N.F.C. East standings.

With 10 days to prepare against a defense that had allowed 80 combined points in its first two contests, the Giants should have came away with a feel-good win at home. Leave it to the Giants’ offensive line to finish the game by producing the least effective rushing attack the Falcons have faced all season (3.7 yards per carry).

While Jones was sacked only once, the pass protection unit continues to lose its one-on-one matchups. The passing game was able to manage in Week 2 against Washington, but downfield opportunities were much harder to come by against a Falcons defense that plays much less man-to-man coverage.

The Giants’ defense looks like it’s regressing from the 2020 season to now, but that wasn’t the team’s major issue on Sunday until the final drive of the game. With a tackle for loss and a sack, Leonard Williams still looks to be one of the five best interior defensive linemen in the league, and the coverage was better this week (given, this was against Ryan, whose arm is closer to an N.F.L. backup’s at this stage in his career) — but if the Giants can’t move the ball on offense, defensive improvements won’t matter.

I shudder to think of what this offense might look like against a much better defense on the road, with the New Orleans Saints up next. This season is shaping up to be a few steps backward after 2020’s baby step forward.

Verdict: Not watchable, and trending in the wrong direction.