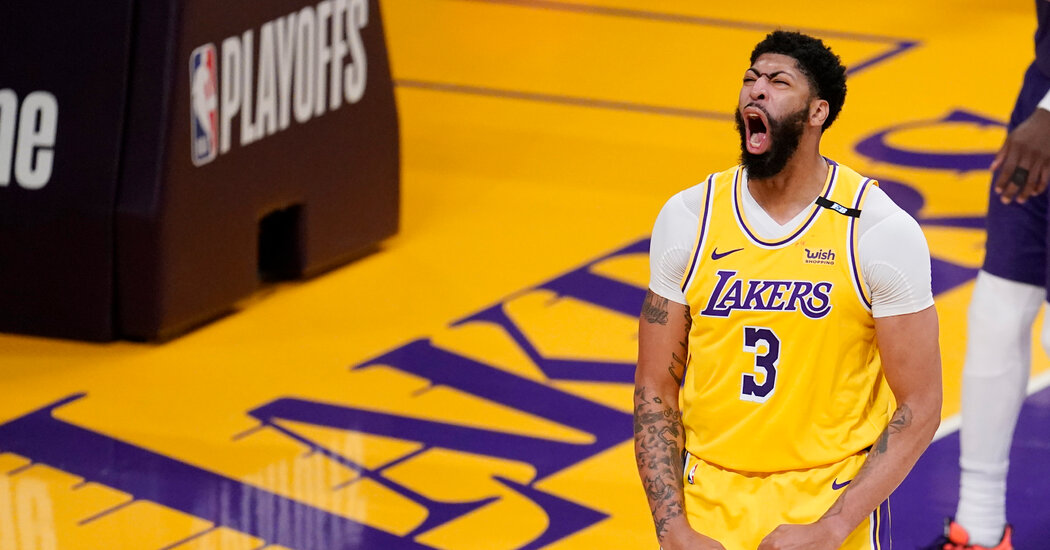 LOS ANGELES — It was not an especially pleasant night of basketball for Anthony Davis. Productive? Yes. Pleasant? No.

The Lakers on Thursday were playing in front of a home playoff crowd for the first time since 2013, and Davis christened the festivities by picking up his first foul 15 seconds into the game. A few minutes later, his face got in the way of one of Deandre Ayton’s elbows.

In the second quarter, Davis sprinted the length of the court to chase down Devin Booker and swat away his layup — only to wrench his left knee. Davis would later describe it as “hyperextended.” Whatever the official diagnosis, he used a heat wrap at halftime and then removed it so that he could continue with his now-familiar business of torching the Phoenix Suns.

Davis, the Lakers’ All-Star power forward, has not been immune to injury. He missed about two months this season with a calf strain, and the Lakers have little chance of defending their N.B.A. championship without him. On Thursday, he was hobbling throughout the second half of the Lakers’ 109-95 win over the Suns in Game 3 of their first-round series, and Frank Vogel, the Lakers’ coach, kept turning to the members of his medical staff: Were they sure this was such a good idea?

“Maybe we should get him out,” Vogel recalled telling them. “And they’re saying, ‘He’s good to go. He’s safe. It’s just about playing through pain.’”

Davis wound up collecting 34 points and 11 rebounds to help the Lakers take a 2-1 series lead over Phoenix ahead of Game 4 on Sunday afternoon, and the Suns — who earned the No. 2 seed with an enormously successful regular season — seem in danger of coming unglued. Chris Paul’s shoulder injury has rendered him a sad shadow of himself. His teammates are being thwarted by the Lakers’ defense, and their frustration is starting to show.

Players from both teams spent the late stages of Thursday’s game barking at each other.

But while the Lakers seemed to consume all the theatrics as fuel — Dennis Schröder, for example, did a series of push-ups after Booker knocked him to the court in the final minute — the Suns lost their composure. Booker was ejected for his flagrant foul on Schröder — Davis called it a “dirty play” — and the Suns’ Jae Crowder soon got tossed, too.

The Lakers, of course, are only seven months removed from last season’s title run in the bubble, and few pundits were dismissing them ahead of their series with the Suns. Sure, they might have limped into the playoffs as the No. 7 seed after a disjointed season that was marred by injuries. But they still employ two of the best players on the planet. So what if LeBron James missed 26 games down the stretch because of a sprained ankle? So what if their lineup was seldom whole? So what if they lost 9 of 15 games in April?

The doubts, murmurs and questions crept in, though, after their Game 1 loss in Phoenix. Davis, after being outplayed by Ayton, took the blame and vowed to be better. Before Game 2, he seemed uniquely determined to his teammates: quiet in a fearsome way. He delivered, scoring 34 points to help tie the series.

On Thursday, the Lakers were leading by 3 at halftime when Davis (and James) went to work. After James scored the first two baskets of the third quarter by attacking creases in the lane, he fed Davis for a dunk. The Suns immediately called a timeout, but the Lakers’ run had the feel of storm clouds forming on the horizon.

“Those two guys really reversed the whole course of the game,” Vogel said of Davis and James.

Coming out of the timeout, Davis kept calling for the ball, and scoring, and limping, and rebounding, and scoring some more. He corralled a lob for another dunk. He faced up against Ayton and lofted a leaner over him. Davis scored 18 points in the third quarter alone, and some close observers of the Lakers were calling it the team’s best stretch of basketball of the season. 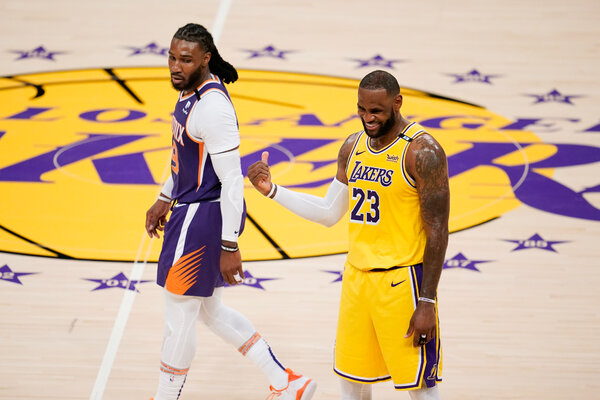 Even Davis’s mistakes came with thunderous flair. After cutting through the lane and catching a pass from James, Davis rose for an attempted dunk that caromed off the back of the rim with such force that the ball nearly grazed the video screen hanging above center court. Later, he lost one of his sneakers while drawing a foul. He otherwise remained intact.

“Just a gutsy, tough performance from a great player,” Vogel said, “and we needed it.”

Before joining the Lakers last season, Davis had been to the playoffs only twice, without ever taking his team past the second round. He was a great player — dominant, even — but he was not necessarily known as a winner, and his exit from New Orleans was a messy one.

Davis went a long way toward repairing his reputation in the bubble, winning a championship with James while making important shots along the way. Now, he appears to be savoring the chance to make another title run, this time in arenas that are beginning to fill with fans.

“We’re finding our groove at the right time,” he said.