MELBOURNE, Australia — After bowing out of the Australian Open this week, Jack Sock and his childhood friend and doubles partner, Jackson Withrow, ended up on opposite sides of a great divide.

Withrow’s childhood dream was to play professional tennis; doubles proved to be his only portal.

Sock, the world’s second-ranked doubles player, has an Olympic gold medal from 2016 that he won in the mixed event, which led to his being honored at a University of Nebraska football game and throwing a ceremonial first pitch at a Kansas City Royals baseball game.

In addition, he shares four Grand Slam titles, three in doubles and the other in mixed.

Sock, 26, has also climbed as high as No. 8 in singles, which is where he stood last year at this time. His ranking since has tumbled to 105, but singles remains No. 1 in his heart.

“I can personally say if I’m not relevant in the singles world and my only choice is to play doubles, I’d probably stop playing tennis,” Sock said.

Doubles is supposed to be the harmonic expression of tennis, but at the Australian Open, the doubles court has become the receptacle for petty grievances and philosophical divergences. It started with Bernard Tomic accusing his countryman and Davis Cup captain, Lleyton Hewitt, of a litany of leadership failures, including writing himself into the lineup for Davis Cup.

Then Dan Evans, the 189th-ranked singles player, fanned the flames in his native Britain by describing doubles players as athletes “who didn’t make it at singles and people who didn’t have the attitude to work hard enough to make it in the singles game.”

Jamie Murray, ranked seventh in doubles, dismissed Evans’s comments as “lazy” and “just total nonsense” and said, “We should be celebrating any success we have in the sport — doubles, mixed doubles, wheelchairs, whatever.”

The Australian Open is called the Happy Slam, but the crankiness quotient at this one has been high — as if everybody woke up on the wrong side of 2019. The men’s tour appears to be a house divided over the future of the ATP president and chief executive, Chris Kermode, who some believe should be removed from office. The women have complained that the men do not support gender equity. The men fell in line behind an exasperated Rafael Nadal, who said at a news conference, “I don’t know why you are trying all the time to create these kinds of stories on this thing.” 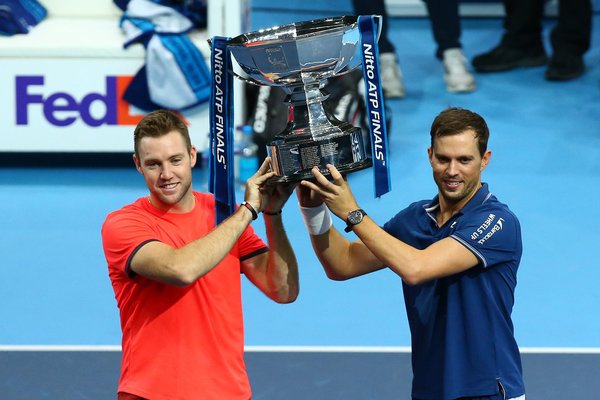 On Wednesday, the tournament’s 10th day, there was harmony, at least in the stands of Rod Laver Arena. During a changeover in the Australian Samantha Stosur’s semifinal victory with Zhang Shuai against Barbora Strycova and Marketa Vondrousova, the Village People blared from the speakers and even the chair umpire got in the act of forming the letters in Y.M.C.A.

By the tournament’s stretch run, all of Australia was celebrating doubles since the men’s, women’s, mixed and wheelchair finals included at least one native son or daughter. (An Australian hasn’t won a singles title here since 1978.) But no amount of success will sway Sock to embrace doubles exclusively.

Sock, who played most of last year with Mike Bryan because Bryan’s twin, Bob, was nursing a hip injury, won two majors and about $1.3 million playing doubles and $738,747 while compiling a 9-21 record in singles. He finished 17th over all in ATP prize money despite ranking outside the top 100 in singles.

“It’s not just singles that you can make a career from in tennis,” said Murray, who has six Grand Slam titles to his brother Andy’s three in singles. “It’s important for a lot of young kids to know that growing up. It’s not easy to make it in the tennis world. There are only a few people that can make a really good living from the game. The journey is incredibly long. However you get there, whether it’s singles or doubles or whatever, there’s options there for you.”

With four career singles titles, including three in 2017, Sock would appear to have more options than most. But he doesn’t see it that way.

Ryan Harrison, who teamed with Sam Querrey to beat Sock and Withrow in the round of 16 this week, said: “Jack doesn’t want to feel discredited for his singles ability because of his dominance in doubles. And a lot of time his success in doubles overshadows him as a top-10 singles player. He’s going, ‘I’ve been 8 in the world in singles, and people are talking about me like a doubles guy.’ That perception is always going to be difficult for him.”

As long as the stigma persists that doubles players are lesser than singles players, the Socks of the sport are going to have a strong incentive to stick to singles. Harrison said he has tried to appeal to Sock’s vanity.

“I’ve told him it’d give him more confidence in singles if he took more pride in literally being the most dominant doubles player,” Harrison said. “He feels like he’s being viewed as someone not capable of playing singles.”

Mike Bryan said he hated to hear Sock would sooner leave the sport than stick to doubles.

“When he gets out on the doubles court, he has a blast,” Bryan said. “And because of doubles, he’s played in some of the biggest stadiums in the world, he’s won a gold medal, he’s been honored at a Nebraska football game. What’s the harm in all of that?”