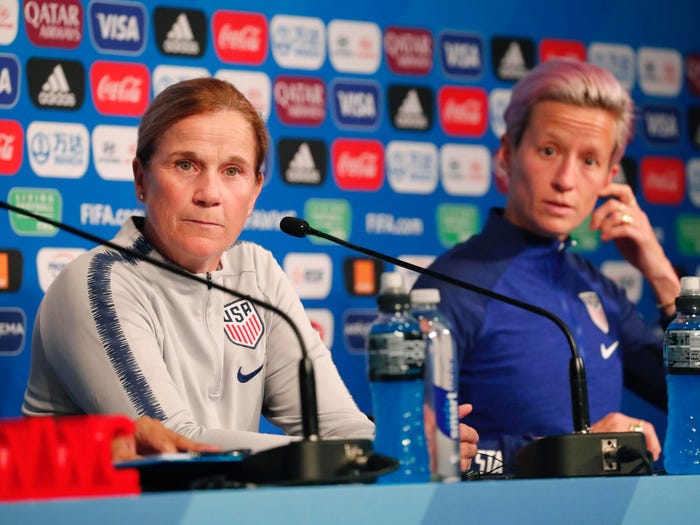 But Megan Rapinoe — one of the most prominent stars in the soccer world — had deep, personal gripes with the coach who led her USWNT squads to back-to-back World Cup victories.

In her new memoir, "One Life," Rapinoe detailed the demise of her relationship with Ellis and expressed anger at the way she handled the pink-haired star's decision to engage in silent protest during the national anthem.

"It was so dysfunctional, so dishonest, such utter, evasive bullshit," Rapinoe wrote, "that my interactions with Jill became strained."

Rapinoe became one of the first white professional athletes to show solidarity with former San Francisco 49ers quarterback Colin Kaepernick by kneeling in protest of racial inequality and police brutality back in 2016. Her expression of allyship towards Black Americans didn't come without repercussions, as the US Soccer Federation and Ellis subtly punished Rapinoe for subverting the status quo in what was, at the time, such controversial fashion.

Rapinoe said she "felt broadly supported" after she told Ellis and two media officers that no, she could not protest without kneeling, and they responded with a simple "OK." But a few days later, when US Soccer published a statement indirectly condemning Rapinoe's behavior, the situation began to devolve.

Ellis took the star striker out of the starting lineup for the next USWNT game. For the two matches after that, she told Rapinoe not to dress. Soon enough, Ellis called to inform Rapinoe that she wouldn't be invited to train with the team ahead of the SheBelieves Cup and that she wouldn't be competing in the annual tournament, either.

"I didn't say: You mother-f—–, you are trying to ice me out and I know it," Rapinoe wrote. "We finished the conversation and I hung up, shocked and fuming. All those missed games at the end of 2016 suddenly took on new meaning."

In March of 2017, US Soccer formally banned national team players from kneeling during the anthem — a policy the governing body has since apologized for and walked back. Not until later that year did Rapinoe rejoin the USWNT, and head coach Jill Ellis "never said a word about freezing me out. No conversation was had."

Rapinoe and a number of her teammates "complained to the federation on behalf of the team and asked them to find us a new coach," to which US Soccer responded that "the only person guaranteed to be going to France for the World Cup in 2019 was Jill," according to Rapinoe. Even so, the team found its flow and — with Ellis at the helm — won its second consecutive World Cup title.

A few months later, as Rapinoe was enjoying her victory lap following her dominant World Cup performance, Ellis retired. On her way out, Ellis was named the Best FIFA Women's Coach, just as Rapinoe earned Best FIFA Player of the Year honors.

"Winning makes people generous," Rapinoe wrote. "While it was safe to say we weren't going to miss each other, the parting speeches were civil."

Still, more than a year after parting ways with Ellis, Rapinoe didn't hold back in her assessment of her former coach.

"I never felt in safe hands with Jill," she said.

"One Life" dropped Tuesday and is available for purchase through most major booksellers, including Amazon and Barnes & Noble.