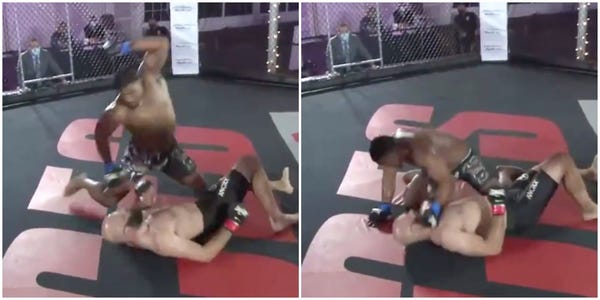 An American fighter scored a brutal knockout this week and hit his opponent with three hammer fists when he was defenseless on the ground.

At the CES 61 mixed martial arts show in Warwick, Rhode Island on Wednesday, Jamelle Jones stepped forward as he threw a left hand over the top, something he had launched throughout the first round, and caught Tyler King so cleanly that his opponent appeared knocked out before he had even hit the canvas.

But Jones did not stop there.

While King lay defenseless on the mat, Jones hit him with a hat-trick of hammer fists before the referee was able to intervene and shove Jones off away from the helpless, beaten, fighter.

Here's an even better angle of the knockout:

MMA Fighting reported that King lay on the ground for well over a minute before eventually getting upright.