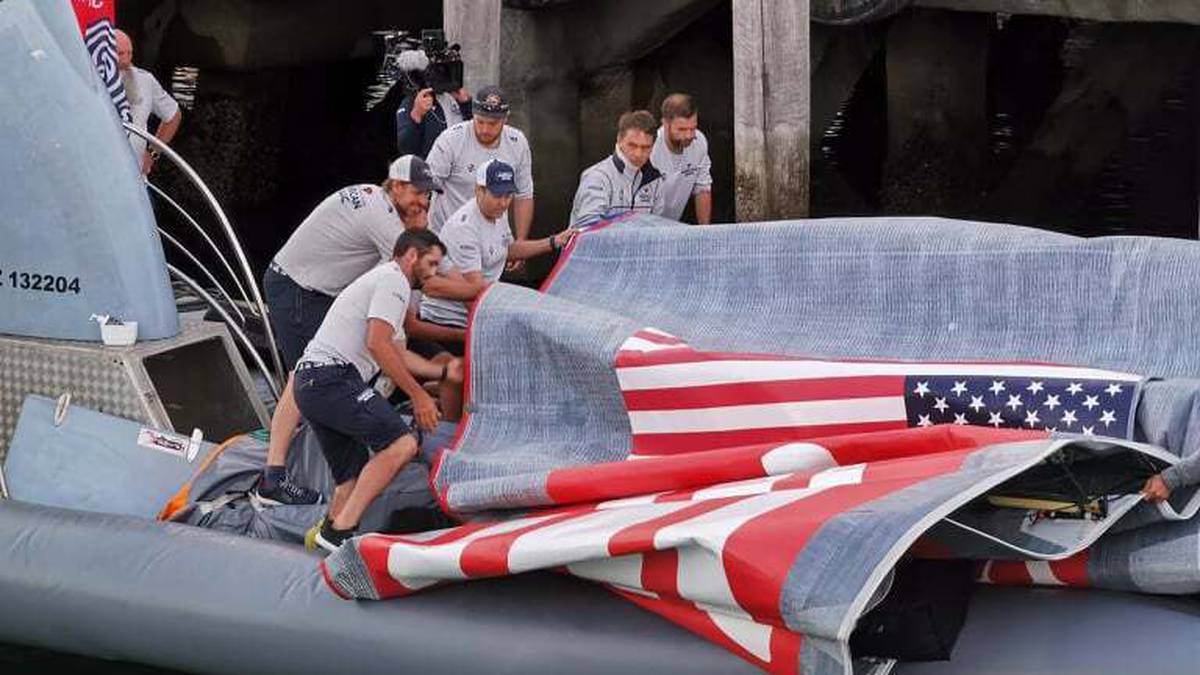 Three days ago, American Magic were the favourites for the Prada Cup – now they may not be able to finish the event after a dramatic capsize on Sunday afternoon.

Their ongoing participation will be up in the air, after Patriot almost sunk beneath Auckland harbour on Sunday evening.

There were grave concerns for the boat, as most of the hull was underwater at one stage, but a dramatic three-hour rescue operation involving the police, coastguard and all four teams (including Team New Zealand) was ultimately successful.

But what next for American Magic?

The boat has been salvaged, but the damage to the highly sophisticated electronics and hydraulics on board will be significant.

The best-case scenario would see them forfeit the rest of the round robin series and hope to recover for the Prada Cup semifinal, which is due to start on January 29.

But that is assuming that the boat is repairable, without considering the psychological impact on the team.

Sunday’s incredible scenes brought back memories of San Diego in 1995, when One Australia sunk to the surface during a race against Team New Zealand.

Patriot had capsized at 5.50pm, after they attempted a sharp mark rounding at the fifth gate in their race against Luna Rossa.

It was a precarious manoeuvre in high winds and as they were bearing away on the final downwind leg Patriot were hit by a freak gust.

The freakish incident occurred when American Magic were about to claim their first race victory.

Thankfully nobody was harmed, as Patriot reared up into the air, then keeled over to the left just after the mark rounding.

Seconds earlier, as they hurtled towards the fifth gate – with a handy lead over Luna Rossa – mainsail trimmer Paul Goodison appeared to sound the warning.

There have been other capsizes with the AC75s, but nothing like this.

Team New Zealand toppled over during practice last week, as other syndicates have during the development phase over the last 12 months.

But in all those cases they were righted fairly quickly, whereas on Sunday the bow of American Magic was damaged significantly, causing it to take on a lot of water.

The New York Yacht club representatives were already under pressure, after a winless start to the Prada Cup, and it will be difficult to come back from this.

The other theme of the day was the continuing dominance of the British, who squeezed past Luna Rossa by 18 seconds to remain unbeaten in the Prada Cup.

After their well-documented struggles in December, their resurgence has been impressive.

Ahead of Sunday they had won three races, and 15 of 16 legs. They were pushed hard by the Italians, and were behind for half the race, but still found a way to win.

After a classic pre-start duel between Jimmy Spithill and Sir Ben Ainslie, Luna Rossa looked marginally ahead off the start.

But Ineos Team UK were ahead at the first cross, before Luna Rossa accelerated away.

By the end of the first leg, there had already been three lead changes and Luna Rossa led by 10 seconds. The Italian advantage was cut slightly on the next leg, but the flash point came at the end of the third leg.

Luna Rossa failed to cover their lead, and Ainslie took advantage of a timely wind shift.

The British managed a spectacular split tack, as the boats rounded the mark together, before Ineos Team UK pulled away, with some colourful language on the Italian boat symptomatic of their frustration.

They made some ground, but couldn’t haul in Ineos Team UK, with the British exhibiting superior speed downwind.

Before the capsize, the second race was another beauty. For the third consecutive race American Magic fell off their foils during the pre-start and were behind off the line.

But they recovered – helped by a premature tack by Luna Rossa – to have a six second advantage at the top mark. Their lead was progressively extended, as they were smoother across the water, particularly downwind, while the Italians looked unsettled throughout.

Their advantage was 42 seconds at the end of the second lap, and they were on course for a timely victory before the unforgettable chaos at the fifth gate.

Heading into the Cup racing?

• Be aware that traffic will be busy, and parking will be very limited.

• Give yourself plenty of time and think about catching a ferry, train or bus instead.

• Make sure your AT HOP card is in your pocket. It’s the best way to ride to the Cup.