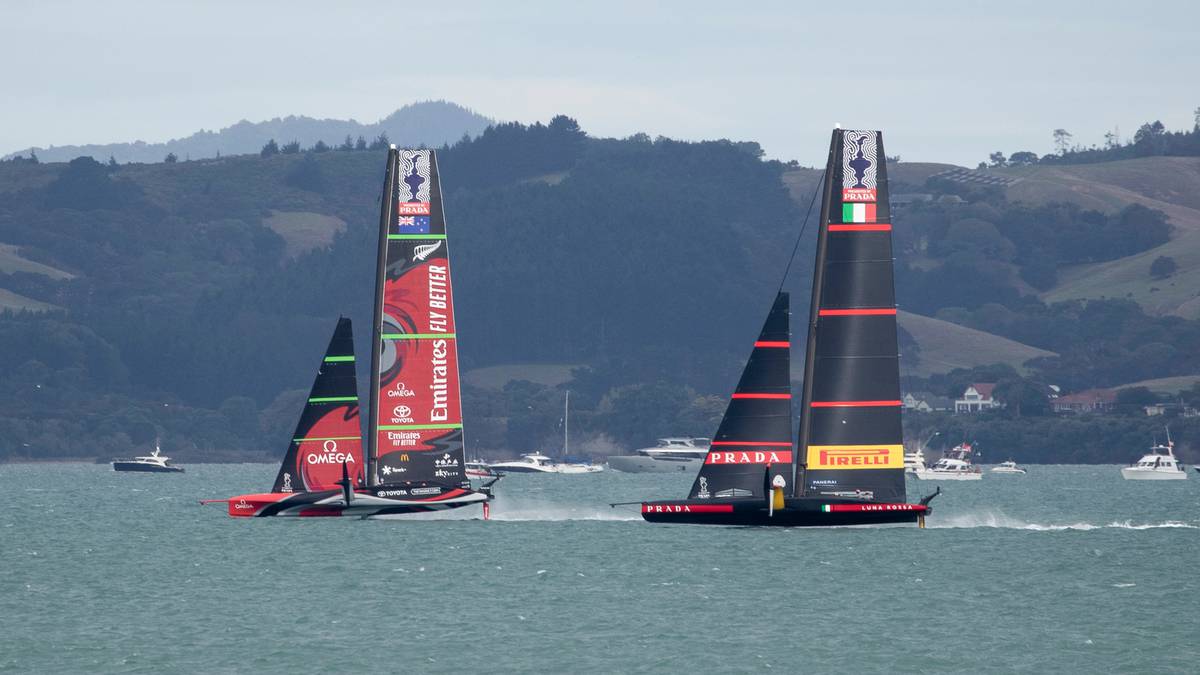 The America’s Cup match will resume today in moderate conditions, however race director Iain Murray has warned of another uncertain day on Tuesday.

Team New Zealand and Luna Rossa will duel on Course E near Waiheke Island today, with winds between 9-13 knots expected for racing, starting at 4:15pm.

The schedule will remain as was expected to be followed yesterday, with Luna Rossa getting port entry in the first race of the day.

The teams were unable to get racing yesterday due to a lack of wind. Murray said it got close at times, but never quite met the threshold to allow the teams to sail.

He warned there could be another day of that sort this week, with conditions looking less than ideal on Tuesday before picking up again later in the week.

“Tomorrow, it doesn’t look pretty,” Murray said. “I guess we’ll wait and see with that one.

“A big factor yesterday was that the clouds started coming back over the city and once the land stopped heating the winds stopped…,” Murray said.

“It’s a simple matter of they have to agree,” Murray said. “Tomorrow looks light, that is the current forecast but they are not high-resolution models…so it’s just a bit early to tell. Right now it looks very unstable.”

Cup officials made the decision to postpone racing to Monday, with winds not picking up enough to reach the 6.5 knots threshold needed to race on Sunday.

On Saturday, Luna Rossa and Team New Zealand once again shared the spoils, with the Match tied at 3-3.

Luna Rossa exploited Team NZ’s mistake in the pre-start to win the first race of the day by 18 seconds and, in a mirror image, Team New Zealand pounced on Luna Rossa’s mistake to win race six by 1 minute, 41 seconds.

One team has to win both races in a day to break the deadlock but Luna Rossa co-helmsman Jimmy Spithill said the teams can only focus on the next race.

“We’re not looking too far ahead,” he said. “Each day we come in and try to focus on the race ahead.

“There will be quite a lot of lessons learned from both races today. We’ll go back, as I’m sure will the other guys, and just come back fighting, stronger and ready to roll.”

Until today, each of the four starts in the series had been won by the team that had port entry to the start box and that won the start. New Zealand skipper Peter Burling called that coincidence and was proved right when the team coming in from starboard, or right-hand side of the course, won both races on Saturday.

Races five and six were sailed on course A off Takapuna Beach in Auckland in a consistent sea breeze of seven to 11 knots, slightly fuller in the first race than the second.

The conditions again seemed perfect for Luna Rossa, whose boat is modelled to sail best in the lighter wind range. Luna Rossa’s larger foils make it more able to stay up in light wind, also make it more stable and able to manoeuvre faster in the light sea breeze.

But although today’s 1-1 tie again left many questions unanswered, it seems the boats are almost perfectly matched in terms of speed in those conditions and the starts are decisive.

In the first race, on a time and distance run to the start line, Team New Zealand tried to wear off speed and fell off its foils. Burling had to push the bow down to regain enough speed to be able to tack and in the meantime Luna Rossa swept over the line and sailed away to an immediate 200m lead.

“We obviously just fell off the foil above them,” Burling said. “We thought we had a little more time to kill than we actually did. We didn’t quite manage to get going again and to take off and they shut down the race pretty well from then.”

The lead was unchanged for most of the race. Team New Zealand made slight gains on the second and third upwind but the 200m lead remained.

Luna Rossa had wanted the left-hand side of the course and with its early advantage it was able to seize it and defend it. Throughout the race it kept bouncing Team New Zealand back to the less-favoured right side, taking advantage of the pressure in the middle of the course.

New Zealand was able to hang in throughout the race but, in a consistent breeze, it wasn’t able to overcome Luna Rossa’s initial advantage.

“I think we did a very good job on the start and again it proved to be a very important part of the race,” Luna Rossa co-helmsman Francesco Bruni said. “But also I think we sailed a lot better than what we did in that second race yesterday.

“I think the left was the right call and during the race the right was not looking as good.”

The second race of the day was the mirror image of the first. From port entry, Luna Rossa dived down into the far right corner of the start box but, as it prepared to turn back up on its run to the line, it seemed to get stuck in a light spot and wasn’t powered up.

Luna Rossa slowed and Team New Zealand kept up speed on its time and distance run, crossing the line first and quickly sailing to a lead of almost 400m.

The America’s Cup match is a best-of-13 series, with the winner being crowned champions and awarded the Auld Mug. The racing window for each race day will be around 4pm-6pm, with the first race of each day scheduled for 4.15pm.

Overall winner of the America’s Cup:

How to watch and stream:

The Herald will have live updates on nzherald.co.nz/sport with AUT’s sailing professor Mark Orams, and you can listen to live commentary on Newstalk ZB, Gold AM and iHeartRadio.

America’s Cup coverage is free-to-air on TVNZ. You can also stream the action live or on-demand at tvnz.co.nz or on the America’s Cup YouTube channel.

Heading into the Cup racing?

• Give yourself plenty of time and think about catching a ferry, train or bus to watch the cup.

• Make sure your AT Hop card is in your pocket. It’s the best way to ride.

• Don’t forget to scan QR codes with the NZ Covid tracer app when on public transport and entering the America’s Cup village.