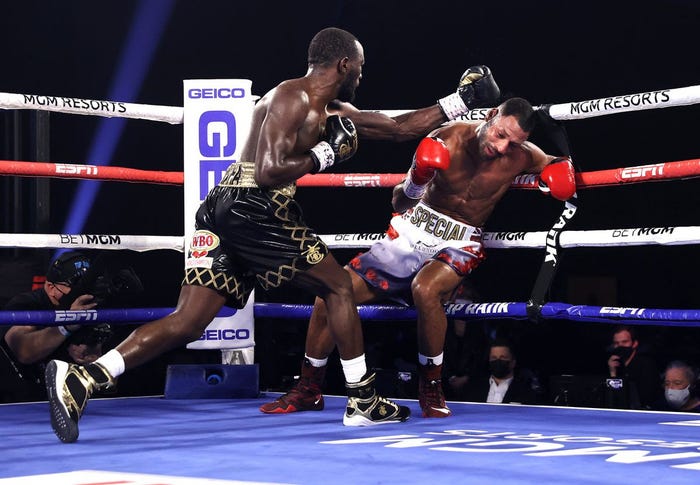 American boxer Terence Crawford thumped Kell Brook into the ropes and used him as target practice to finish their welterweight fight.

The WBO championship bout took place inside the sanitized MGM Grand Conference Center in Las Vegas. The venue is being used as a residency by powerful boxing promotional company Top Rank while it navigates the coronavirus pandemic.

Insider's No.4-ranked boxer on the entire planet, Crawford is a three-weight world champion and a reigning titleholder at 147-pounds.

Brook's better days are behind him, however, he was competitive up until the finish, out-landing Crawford with his output of punches in the first and second rounds, according to Compubox data sent to Insider.

Crawford later said that all he was doing during the early stages was gauging range, as Brook "had good distance."

The momentum began to change in the third with Crawford taking Brook's jab away, out-landing the British fighter by a ratio of 3:1, and then closing the show for good in the fourth.

It was in that round when Crawford's power took hold as he sent Brook flying across the ring and into the ropes, with a right hand he threw from short range.

Referee Tony Weeks gave Brook a count, deeming the ropes to have held him up rather than hitting the deck.

But sensing the finish, Crawford loaded up on solitary strikes fired in succession, each and every one of them thrown with the intention of scrambling Brook's brain.

Once Crawford had maneuvered Brook into the ropes with clever footwork, he hit him with a looping left, a right hand over the top, a digging left, another digging left, a left hook, which missed as Brook attempted to get out of the way, and then a final right uppercut for good measure.

Weeks stepped in to rescue Brook who was stopped on his feet. It was all over. Crawford had won — again.

"He lost to the better man," said Crawford after his victory, which advanced his undefeated pro boxing record to 37 wins (28 knockouts).

"Never in my career, nobody has ever done that to me in sparring or anything," said Brook. "It was one of them … I got caught with a shot I didn't see."

Crawford's promoted Bob Arum, the 88-year-old founder and CEO of Top Rank, said: "Terence Crawford showed, once again, why he is the best welterweight in the world.

"It was a dominating performance … Terence ranks up there with all the great welterweights I've promoted."

Crawford added that he now wants to pursue a welterweight fight against Manny Pacquiao, the 41-year-old former eight-weight boxing champion.

It is a bout that has long been touted, but never made. Arum even told Insider last year that Pacquiao's people did not want to face his guy, but then speculation mounted that it could take place in the Middle East.

"I want Pacquiao. I want to revisit that fight. That was a fight that should've happened right now. But being that the pandemic happened, and they weren't going to allow fans in the Middle East, they had to put a hold to that," Crawford said.

"Everything was 95% done. We had the venue, the money was almost there. It wasn't quite there. That was the only thing we were waiting on."