OAKLAND, Calif. — The past five years were so often magical for the Golden State Warriors, so frequently charmed, that they somehow found a way to win even when they lost.

The last time the Warriors were toppled in the N.B.A. finals, remember, they emerged with Kevin Durant as a consolation prize.

You’ll recall that the recruitment of Durant began within minutes of the final buzzer that sealed Cleveland’s groundbreaking comeback from three-games-to-one down in 2016. Would Durant have consented to become a Warrior if Golden State, to cap a 73-win season, had become back-to-back champions? Highly doubtful.

This time, though, there was a distinctly different vibe in the bowels of Oracle Arena when it was all over. The beat-up Warriors’ response to profound disappointment on the game’s grandest stage, after Kawhi Leonard and his Toronto Raptors finished them off in six games, is nowhere near as clear cut in 2019.

Complicated is one way to describe it. Devastated, truth be told, was the more fitting adjective to describe the looks on the faces of Lacob, Coach Steve Kerr and Bob Myers, Golden State’s president of basketball operations, after they witnessed the second catastrophic injury suffered by a Warriors star in a span of four days.

On Monday, Durant ruptured the Achilles’ tendon in his right foot. On Thursday, Klay Thompson tore the anterior crucial ligament in his left knee.

On June 30, both will become free agents who can command in excess of $400 million combined if they both get five-year maximum contracts from Golden State. The Warriors have planned all along to sign both to max deals and may go ahead with maxes in both cases. Yet it’s virtually certain that Durant and Thompson will each miss the bulk of next season, if not all of it, rehabbing from the major setbacks they just suffered.

It’s why you resisted the urge to paint Leonard’s moment of triumph as the ultimate last-laugh ending to a season that began with video of Leonard’s awkward cackle on media day going viral. Happy as all of Canada surely is for its Raptors, there just can’t be much laughter after what the Warriors endured.

“The last week.” Lacob said, “has just been like a nightmare.”

In the same hallway outside the Warriors’ locker room three years earlier, Lacob was dropping confident hints about Golden State’s forthcoming pursuit of Durant — without saying Durant’s name. The caution coming from Lacob late Thursday was unmistakable when I asked him about his confidence level when it comes to re-signing Durant.

The extent of Thompson’s injury wasn’t publicly known at that point, but it wasn’t long before it became clear that the closest thing to a sure thing in basketball over the past five years is suddenly caked in uncertainty. Stephen Curry surely understood it as he headed from his locker stall to the postgame showers — judging by how hard he slapped a wall adjacent to the bathroom with his open hand.

Curry somehow had a look at a 3-pointer for the lead with just under 10 seconds to go in regulation. Golden State had a shot to force a Game 7 on Father’s Day despite the absence of Durant and Thompson and Toronto’s clear advantages in the length, depth and health departments.

But Curry knows the score. Every member of Golden State’s so-called Hamptons 5 lineup will be in his 30s next season. Andre Iguodala will be 36 and will likely play his last N.B.A. season in 2019-20. 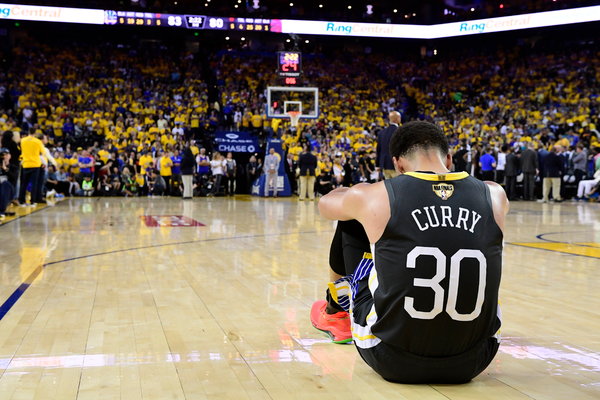 Shaun Livingston, meanwhile, is openly contemplating retirement at 33. Andrew Bogut, 34, is headed back to the Sydney Kings of Australia’s National Basketball League. DeMarcus Cousins is headed for free agency, too, but is widely considered unlikely to return.

What kind of team will the Warriors have next season, when they move across the bay to the glitzy new Chase Center in San Francisco, even if they’re able to re-sign Durant along with Thompson?

“I wouldn’t bet against us being back on this stage next year and going forward,” Curry said.

Said Draymond Green: “I think everybody thinks it’s kind of the end of us. But that’s just not smart. We’re not done yet. We lost this year. Clearly just wasn’t our year, but that’s how the cookie crumbles sometimes. But, yeah, I hear a lot of that noise, it’s the end of a run and all that jazz. I don’t see it happening, though. We’ll be back.”

The problem: It isn’t just the two months of ceaseless injury woe Golden State endured this postseason, or the lack of financial flexibility to freshen up the roster, that gives you pause.

“It’s more the mental strain, especially when you have success,” Iguodala told me earlier in the playoffs, acknowledging the toll ceaseless scrutiny has taken on the core members of a group that has alternately entertained and frustrated so many fans in rival cities.

“It opens your eyes a lot,” Iguodala said. “You don’t get the chance to enjoy it. It’s like, we’ll win one night, then two days later it’s right back to answering the same old questions: ‘Are you guys really this good?’ Everyone continues to doubt you. Or they say, ‘You’re about to lose this guy, so now what are you going to do?’ Or: ‘You’re not king of the N.B.A. any more.’ You don’t get to enjoy your success as much any more.”

There will be more pearls like those from Iguodala coming soon. His first book, “The Sixth Man,” will be out June 25.

Firm declarations about anything else, by contrast, were unusually scarce in a building that had been the setting for so much winning, showmanship and bravado over the past half-decade.

The Raptors won 17 of the 24 quarters in this series and tied two others. The Warriors’ keeping it as close as they did, as injury-laden as they were, was some trick.

Yet the pressure is on Lacob and Co. now like never before — for several reasons. The whole organization remains under significant scrutiny for the clearance Durant received to play in Game 5 — and the Achilles’ tear that resulted after just 12 minutes of court time. The embarrassing suspension of the Golden State minority investor Mark Stevens, for shoving Toronto’s Kyle Lowry, is another major eyesore. Most of all, though, it’s the inflation that awaits Warriors fans when the team relocates to San Francisco.

Can the Warriors, as they leave Oracle behind after a 47-year marriage, stay at a level commensurate with dynastic ticket prices?

“We’re planning on owning this team for a long time, so I might have a little longer-term view than that to be honest,” Lacob said of he and his main ownership partner Peter Guber. “I think you can rest assured we’ll figure out a way to be very competitive going forward.”

Said Ron Adams, 71, Golden State’s seen-it-all assistant coach: “This series was just so highly unusual, losing two of our best players to major injuries, this. But you have to take the long view sometimes. We’ve enjoyed pretty good health over the years and we’ve played some teams with significant losses. Our side of that equation has been pretty heavy in these playoffs, but what can you say? We’ve had a magnificent run.

“It probably gets a little tougher now, but in life you have to relish these things because there’s no guarantees for any of us that it comes around again.”